Update on bovine tuberculosis in the EU 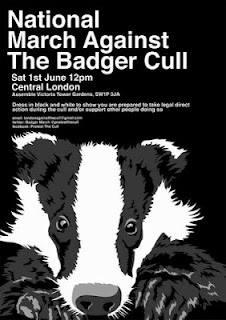 We are grateful for updates on the developing situation in parts of mainland Europe, where bovine tuberculosis was thought to have been eradicated. With incidence at or below 0.02 percent of cattle reactors and 0.01 per cent of registered herds, TB Free trading status has been the norm for many parts of Europe for decades. Thus herds were on abattoir surveillance only, but this unfolding story involves wildlife reservoirs and a human case. (For comparison, please note that our incidence of TB in tested GB cattle reveals around 10 per cent of herds with problems and an increasing spread to the north and northeast of the traditional badger havens of the south west.)

We touched on the problems in parts of Bavaria and Switzerland in this posting, also pointing out that once cattle reactors are found, farms can no longer sell milk or meat on the open market.

And in another part of Germany over 100 cattle have tested positive on one farm.


Hemslingen - On Monday morning, more than a hundred cattle Hemslinger cattle and dairy farm have been culled. All animals had been previously tested positive for tuberculosis (TB), a disease that was considered extinct in Germany until 1997. Since then there has been in Germany only isolated cases of bovine tuberculosis, to the infectious disease transmitted by droplets in March occurred in greater numbers in the Allgäu.


The farm in question is about one-third of the stock concerned. The veterinary Rotenburg / Wümme has led ring controls in which a further spread of the disease is to be found on other stocks through sale of fattened animals or infection of animals on neighboring land. "The affected farm in Hemslingen is safe," said district veterinarian Dr. Joachim Wiedner on demand from our newspaper. Provisionally neither dairy animals there may still be recycled sold".

And from this outbreak, a much more worrying connection and a reminder of why we sign up to International directives to control and eradicate tuberculosis - a fatal zoonosis - from any animal host. The farmer concerned has been seriously ill for months, with a disease which should have been consigned to the history books. It is not yet clear whether he infected his cattle, or vice versa.

Further cattle tracings from Hemslingen have revealed more problems. And more cases are coming to light originating the Allgau region, where the wildlife reservoir in deer has caused havoc along the foothills of that alpine area.

This report explains, and briefly, the translation is this:


In Allgäu Bovine tuberculosis is rampant. Now there is increasing evidence that deer the dreaded epidemic has spread - in other alpine regions. From Lindau to Berchtesgaden cattle now be tested and shot deer increased."


But reports are now coming in from the Ardennes region of France which implicate badgers as a possible wildlife vector. 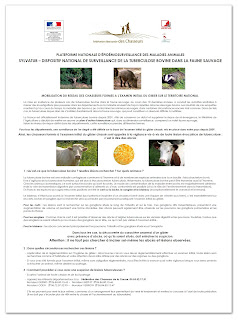 On the left is page 1 of a poster circulated by the French equivalent of our  AHVLA / Defra. This is to inform about the ravages of 'bovine' tuberculosis on various known wildlife hosts.


And this is rough translation, describing the postmortem of a second tuberculous badger, in the Ardennes, courtesy of our colleague in Bavaria:

"Another Badger was diagnosed with symptoms of bovine tuberculosis . This time, it is a male who was taken on May 5 Contreuve commune, at a place called The Aspière. He was transported to the laboratory of department of Hagnicourt analyzes.

There, an autopsy and samples were taken. "The results of this animal have to highlight the DNA of Mycobacterium tuberculosis complex," said in a statement the prefecture. The strain in question is close, as the first badger, from that detected on households and cattle Semide Sugny (our editions of 18 and 25 May). "At this stage it is impossible to conclude that a significant infection of wildlife in this area," he said.

"[We] must await the results of all the trappings to assess the rate of infection in the Semide-Contreuve-Sugny area. "In fact, more than 80 badgers will be captured". 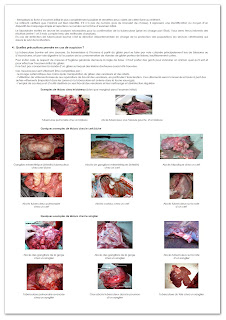 It's good to see that France takes wildlife reservoirs of tuberculosis seriously. We have open days to find them new homes.


Page 2 of this  graphic poster from France carries post mortem pictures of the effects of tuberculosis in a badger ( un blaireau) deer (un cerf / biche) and wild boar (un sanglier).

While in Great Britain, we prefer the black and white image at the start of this posting.

And airbrush the consequences of tuberculosis on anything it may have contact with.