** We have updated this posting to fully explore Defra's pdf strapline for their Table 1 totals, adding the explanatory notes which appear (apparently with great reluctance)on their website version. 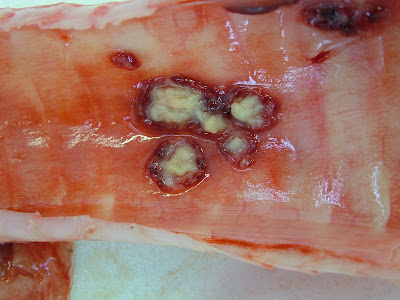 Over the last several months, or even years, we have watched as the spillover of bTB has affected more and more domestic pets and companion mammals. One such group has proved to be highly susceptible to TB, hugely infectious and possible capable of forming pockets of the disease, which could then transmit into wildlife or cattle. Or worse still, their owners. These are members of the camelid group, and in particular, alpacas.
This one (above) had advanced TB lesions right up to his throat, and was described by the VI official conducting its postmortem as "infectious with every breath he took". He showed no symptoms, had passed skin tests and was euthanased as a contact.

It was at the start of the TB Awareness roadshows in 2009, that we realised all was not well with Defra's computing of their stats for these animals. Huge gaps appeared between Defra's headline 'culture sample' table, and the reality of deaths on the ground. We explored this further in this post.

Compare this collective dragging of Defra's institutional feet, to the Welsh Assembly Government's efforts to bring camelids under the statutory umbrella of TB control. And then read Spelperson's new plans dumbing down of policy, released yesterday in this pdf - and weep.

Adding insult to injury, in this document, even the notes explaining that these figures are for (often) a single 'positive culture' are missing, with Table 1 (printed as Table 4) above this strapline;


But when the same table is viewed on the Defra website the following notes appear for Table 1:

* Infected = positive for M.bovis on culture.

Note 1: We can only provide data on the number of M. bovis isolations from notified suspect clinical and post-mortem cases of TB arising in some non bovine species.
Note 2: Cultures and post mortem examination may not be carried out at the VLA on every animal removed from a herd once TB has been confirmed.
Therefore not all animals removed for TB disease control purposes may have been reported above.

Which is somewhat diffeent from the explanantion in the currect pdf.
This implies just 68 camelids dead in 2009, and 43 in 2010. Is that all ? No, it is not. And those figures and the implicatios attached to them, are a damned insult to the owners of alpacas who have lost 110 (out of a herd of 110), 52 (out of 52) and 48out of 54 animals as bTB ripped through their herds.

The table below is just a snapshot of full case histories of just 17 alpaca owners, and for those with animals remaining, TB and losses are ongoing. Just 30 members of the group - a small number of herds recorded by Defra as having TB problems - have recorded 422 of their animals removed by Defra for TB control purposes. 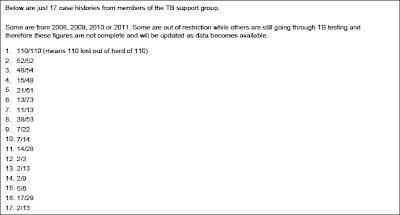 The news release from which this information comes, issued yesterday, can be viewed on this link. (Click NEWS button.)

In their latest statement on TB in non-bovines, Defra say :

Having been knocking at this particular door for almost two years, and with the non-description of Table 4 in the latest statement in mind, we are not holding our breath.

And Defra's intentions regarding the ongoing and increasing TB problems in other species groups ?:

119. A more consistent approach to TB policy for non-bovine farmed species is needed, one where eventually, and through building on partnership working, the various industry groups can become self regulating without unnecessary interference from Government. We want to give livestock owners more responsibility for tackling this disease, giving them a stronger stake in managing risks and empowering them to take action. We want owners to be able to decide for themselves, within a broad framework of the Bovine TB Eradication Programme for England, July 2011 (Defra) – Pages 48-52 set by Government and the industry, how to manage their disease risks in the best interest of their businesses. 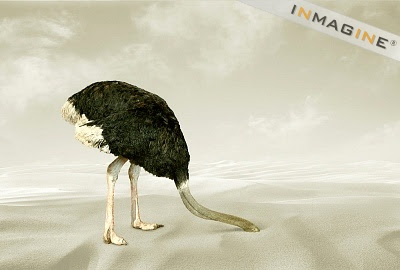