Last year we had the sad task of explaining to readers that alpaca owner, Dianne Summers  herself,  had contracted tuberculosis. The type was confirmed as m.bovis and the spoligotype found to be the same as Dianne's alpacas which were euthanized in 2008 - 2009.

It is also the same strain found in badgers inhabiting that locality. 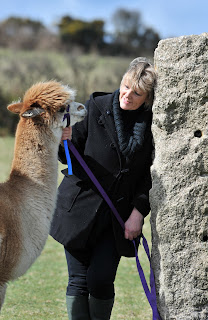 After a rocky start, including several chest drain procedures to remove fluid from her lung, in the spring of last year, Dianne was put on a vicious cocktail of drugs. But her body didn't take kindly to the onslaught and in early May she was hospitalised again in an attempt to balance the side effects of these drugs, with their expected benefit.

It is a year since Dianne was diagnosed with tuberculosis and fourteen months since her illness started. On this anniversary we have been given permission to update you on her progress.

After 9 months of chemotherapy, which saw her almost bed ridden for weeks and left her very breathless and weak,  Dianne's drugs were withdrawn in early March. This was so that further tests could assess the progress of this evil disease. So far, she has undergone X rays and scans, had a trot on a treadmill and a bronchoscopy is planned. Dianne tells us that the scans revealed a:


"fist sized white patch on my lung, but in its centre is a black hole".

Her consultants are not sure yet if that 'black hole' is scarring, or the active but walled up infection, for which tuberculosis is renowned, which could break out again. Samples from the bronchoscopy will be cultured and meanwhile, next week, her drug regime will be reinstated.

* Meanwhile Dianne has undergone a PET/CT  or Positron Emission Tomography / Computed Tomography scan. This type of scan involves being injected with a radioactive tracer, and then a 3D computerised scan is taken. She tells us that she still suffers pain in that lung, and gets breathless easily.

So for those who still think tuberculosis is easily cured and that a week's course of antibiotics will do the trick, think again. Dianne had BCG as a teenager and also had regular X rays during the passage of this disease through her alpacas and afterwards. .

This case is far too serious for our renowned cynicism, but Dianne's illness should remind us all that  mycobacterium 'bovis' is not a disease of cattle. It is a deadly zoonosis and should be treated as such.

And once again, as we wish her well, we are reminded that Defra still refuse to place camelids under their TB eradication umbrella and continue to drag their collective heels on a sound diagnostic ante mortem test.