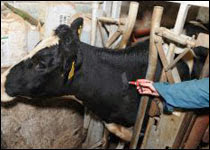 Yesterday Defra launched another Consultation document - (link) so that anyone who feels the need, could democratically comment on exemptions to TB testing UK cattle,  currently in place.


If you remember, earlier this year another 'consultation' took place on many aspects of our non-policy towards zoonotic Tuberculosis. This was conducted under a technique known as 'Delphi' - [link] where small groups of people were herded by facilitators towards a predetermined conclusion.

And this one is little different, despite the pretense of a democratic process and opinions being sought.

Both end game conclusions are writ large in instructions from our European masters and summarised  in a letter - [link] to Owen Paterson from Tonio Borg, a member of the European Commission in February this year.

The letter summarises the  UK bTB eradication programme to be implemented in 2013 which was approved by Commission Implementing Decision 2012/761/EU.


"This programme entails a number of commitments from your authority, in particular:


• the abolition of Approved Quarantine Units (AQUs) by the end of 2013;


* the completion and implementation of the plans for abolishing Sole Occupancy Authorities;


• a commitment to carry out in 2013 a further review of the remaining exemptions to pre-movement testing;


• a thorough review of the arrangements for the implementation in the UK of the concept "holding" as laid down in Union legislation;


• the limitation and phase out by the end of 2014 of the practice of de-restricting certain epidemiologically separate parts of bTB-affected holding."

The letter is on this link. [-link] And 'consultation' or not, several million Euros to test and slaughter more UK cattle, depend on compliance with it.

Thus we are seeing a decade or more of licensed exemptions to the old TB herd restriction rules, which while making zTB easier for farmers to live with,  did absolutely nothing to address the cause of their incarceration, unravelled in indecent haste by our paymasters.

And no amount of 'Consultations' will alter the outcome.