This week has shown the true extent of the problems any Secretary of State faces when attempting to solve a problem which various of his un-civil servants would rather he did not.

We do not intend to comment on the unknown content of a document 'leaked' to the BBC, except to enquire, by whom and for what purpose was it leaked to this particular organisation?
As Alistair Driver comments in this report - [link] published by the Farmers Guardian:


The BBC’s report has raised questions about how the report, or parts of it, was leaked and whether the leak, if genuine, came from the panel itself, Defra or its agencies.

This comes hard on the heels of another alleged mathematical cock up - [link] by the AHVLA's amazing  new TB computer programme known as 'SAM'.

A year ago almost to the day, SAM was pronounced 'fit for purpose' - [link] when it most certainly was not, - [link] and if the latest news is to be believed, is still not up to scratch.

Meanwhile, as FERA's Mark Chambers , "Mr. 74 per-cent" encourages his followers to indiscriminately jab any badger they are able to catch, - [link] the BBC gives free rein to a consortium of opportunist Badgerists and their assorted travellers on this over loaded gravy train, while totally ignoring the increasing march of a grade 3 zoonotic pathogen, zTuberculosis.

Vital to any eradication process for zTuberculosis, is solid and current data on its progress. So may we respectfully suggest that:


1. If they have not already done so, Natural England share with AHVLA the identity of farms involved in the cull areas of both Somerset and Gloucestershire and produce cattle zTuberculosis results as stand alone figures. Statistics which are not be watered down (if you'll pardon the pun) by the rest of the county stats and attributed to cattle measures introduced in 2014.


2. That the IAA area of Wales, (where intensive cattle measures have been applied) produce monthly figures, as above and not diluted by the county stats, or, as happens at present, lagging 15 months behind the event.


3. Areas vaccinating any passing badger also produce up to date monthly statistics on the incidence of cattle zTB in those areas.

From the lack of up to date -[link] statistics from areas both vaccinating badgers and operating an Intensive Action Area for cattle, one must assume that the sharks are more than happy to continue their circling in a vacuum of silence on results of these efforts. 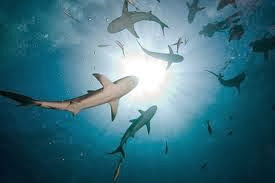 In this case, it is the various Agencies which together form the megalith known as 'DEFRA', holding hands with the BBC, various NGOs, the Wildlife Trusts and dancing to the tune of Brian May's guitar, who are circling for the kill around their new boss, the Right Honourable Owen Paterson MP.