Following on from our posting below, another member of the voracious predators hacking away at the supposed content of a much leaked document, is the left wing Bow Group. - [link]

The group has found the time to compile a report into the as yet unpublished 'Expert' inspection report on the pilot culls, and also to publish it.

We do not propose to go through its lightweight content in any detail: suffice to say it begins and ends with the RBCT, Badger Dispersal Trial, learning nothing of any work on zTuberculosis done prior to that charade, or conclusions drawn since.

For the origins of the trial, it is useful to note the comments of the arch magician, Professor John Bourne, describing to the EFRA Committee - [link] how 'his' trial was designed with a steer not to cull badgers at the end of it. And as one member of his team, wanders through leafy glades on your television screen, explaining how any cull of badgers must be quick and complete to be successful, one may wonder how she manages to keep a straight face. Professor Rosie Woodroffe was part of the team which oversaw the 8 night annual forays with cage traps, the location of which were well publicised. That was the protocol dreamed up to capture badgers within the zones of  the RBCT.

Instead of believing her own guff, had Rosie ventured into the realms of history, she would have seen that a thorough clearance -[link] kept the area in which it took place clear of cattle TB for at least a decade.

But we digress: contrary to his instructions, John Bourne's efforts to create perturbation and stir up heavily infected populations of badgers and then bugger off  disappear for a year or more, did have an effect on cattle TB. And it wasn't the one which he expected. - [link]

And contrary to the populist green bio-garbage mantra that sentinel tested cattle are responsible for this epidemic of zTuberculosis - now affecting many other mammals and about which Defra would rather keep schtum - intense cattle measures have been attempted before. And failed completely.

But the Bow Group and their assorted followers, would very much like to see this country condemned to repeat -[link] this stamp down on cattle movements. This despite its recorded futility and despite the readily available spoligotype maps - [links] which after four decades of painstaking work, still show distinct blocks of one strain of zTB circulating between tested, slaughtered sentinel cattle - and free ranging badgers. 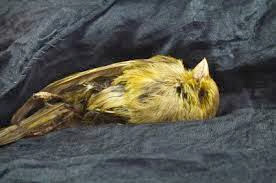 Shooting the canary who brings you the message is never very smart, as the coal miners of old found out to their cost.
Posted by Matthew at 8:38 PM