Tuberculosis - as it is.

Further to the Side effects - A request thread which we posted in May, one alpaca owner filmed the side effect of the skin test, which appeared within a couple of hours of the tuberculin antigen jab on an alpaca subsequently found to have generalised TB. The video shows this side effect.
This animal is gasping for breath, its lungs already destroyed by this disease, are now seriously compromised. This is not pretty.

This is the reality of tuberculosis - speeded up to 'end stage'.


Prior to the tuberculin antigen skin test jab, this alpaca appeared perfectly healthy. She was euthanased and found to have generalised TB. Dianne Summers tells us that she too had an alpaca react in this way:

"I had this happen on one of my animals and it is horrific when you experience it. He recovered fully the next day BUT as with all the others was found at postmortem to be riddled with TB".

NB: Dianne also explains that on the video, when the owner describes an 'injection' he means the tuberculin antigen jab, given on day 1 of the intradermal skin test.

Dianne's small group of 28 alpaca owners who have experienced this in their animals, report 22 instances. In four cases, the animal either died or was euthanased on welfare grounds before the reading of the skin test, 72 hours later. All the animals in this group had appeared, as we described the animal on the video clip, perfectly healthy prior to the jab. All of the animals who experienced this reaction were subsequently found at post mortem, to have generalised tuberculosis. Of the 22, only 3 had failed the skin test. Most passed - if they were alive for it to be read. Of the animals remaining, some subsequently failed a blood test, some died and others were volunteered to AHO after showing signs of TB.

We are grateful to the the Alpaca TB Support group, for this information, and to Di Summers for patiently collating it. Ms. Summers would like us to add, that the importance of monitoring alpacas after a skin test should not be underestimated.
She strongly recommends that owners isolate (with a companion) any animals showing this type of reaction - even if they appear to have recovered. The data gathered thus far would indicate that this 'reaction' to an introduction of tuberculin antigen in the skin test, is far more accurate than the test itself. All the animals affected have proved to be riddled with tuberculosis, regardless of the measured result of the test. 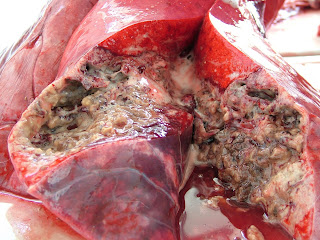 The effect of Tuberculosis on lungs tissue is illustrated in this pm slide of alpaca lungs. Very little of the lung remains able to function: the examining veterinary pathologist estimated only about 20 per cent.

If you remember - and we do - the RSPCA, in a considerable underestimate of its descriptive powers, described tuberculosis in badgers as 'A slight wheeziness' helpfully adding that:

"In the few badgers that do have symptoms, they are wheeziness and loss of weight and condition. There may be some skin ulceration."

So that's OK then? OK for badgers to die, drowning in their own body fluids, - as long as that death is unseen and its route progress airbrushed?

Anyone still under the impression that tuberculosis - or consumption as it used to be called in human beings - is a small inconvenient blip, or that any mammal suffering its end stages is not actually 'suffering', needs a reality check.
Posted by Matthew at 7:00 PM

One would assume then, that should the disease get to an advanced stage in cattle they would also become unable to breathe? Thus eventually dying??

That's precisely what happened to my grand-father

Before my alpacas were finally confirmed with bTB and ultimately died, we commenced a course of Nuflor (http://www.nuflor.com/home.html)
About 30 minutes after the injection was administered the alpaca exibited the exactly the same signs and sounds of distress as those shown in the video clip.
My vet thought it was possib;ly anaphylactic shock. One of the effects is to cause breathing difficulties due to swelling of the trachea - hence the noise and on an already compromised animal the effects would I guess be quite severe.
Perhaps a Vet could comment.

We understand that in the 1950s when the cattle screening began, this reaction was seen in few cattle with what was found at postmortem to be generalised TB.

As skin testing became mandatory and regular, it is now rarely, if ever seen. The skin test is very good in cattle, detecting exposure to the bacteria which causes TB, and in the vast majority of cases, cattle are slaughtered way ahead of any transmission opportunities.

RV,
We are expecting a veterinary input to this 'reaction'. Data will be written up, and given a wider audience, initially in the veterinary press.
We feel from the video, and some deaths reported, that there is a definite welfare issue here.

Lots of vets including BVCS Gina Bromage have suggested anaphylatic shock. What I find hard to understand is why the majority seem to recover from this but succumb later or fail a blood test.
Can I also ask - did your alpaca recover after the injection or did you have to euthanise.
Can we give your details to go towards the research.
If so please contact me on summersdianne@yahoo.com it would be very much appreciated.

Reports of camelids suffering severe allergic reactions apparently as a result of tuberculin testing brought back to me two ancient memories. One, from the 1950s, when I was subjected to a tuberculin test prior to mass vaccination at school, (those of us who passed the test were vaccinated while one or two who suffered swelling of the whole arm were not), and the other from 1976 when, as a new entrant to the State Veterinary Service, I visited the Central Veterinary Laboratory at Weybridge. One of the staff in the department where tuberculins were manufactured remarked that they also supplied tuberculin for human skin testing prior to vaccination; it was the same product as the “mammalian” tuberculin that we had been using in cattle until the previous year but diluted an extra thousandfold. I asked him what might happen if we accidentally injected a farmer with full strength bovine tuberculin and he replied that he might die!
If the use of the tuberculin test in camelids is to continue, I suggest that it would be wise to use greater dilutions of tuberculin, or to precede the test with a safety check using a very dilute bovine tuberculin.
The children who failed the pre-vaccination test were neither vaccinated, treated, nor sent for further investigation. I never heard of them developing clinical symptoms of disease. They had shown evidence of possible exposure to disease and a strong immune response.
For reasons which would take too long to explain here, if I were a camelid owner, unable to maintain my herd in a badger free environment, I would want to cull animals showing clinical signs of disease, isolate animals which passed the tuberculin or gamma interferon test and breed from those who showed evidence of immunity by failing the tuberculin test. If I had to buy new breeding stock I would want to insist on animals which were reactors to the tuberculin test. Any vets reading this who think I have taken leave of my senses should ponder the folly of culling animals testing positive for BVD antibodies.

Yes, Andrew Proud's theory makes logical sense, but the data do no support it, do they? I've theorized along similar lines in the past, but we don't have any instances of animals suffering side effects and not having the disease, do we? Similarly, just about all of those reacting to the skin tests had massive lesions.

At risk of getting a bit technical, were the massive lesions that Georgina reports evidence of progressive disease, or of an immune response (i.e confined to lymph nodes? My experience, and the historical data available to me, are entirely from cattle but I have come round to the view that where the lesions are those of a "primary complex" (i.e portal of entry and lymph nodes only) the overwhelming majority will not develop to generalised TB. In cattle compulsory eradication was preceded by inspection of herds and slaughter of animals with such advanced disease as could be detected by clinical examination. Surprisingly, the numbers taken each year fell dramatically in the 18 years before any reactor was compulsorily slaughtered.
Leaving the reactors alive and killing the clinical cases had the effect of selecting for immunity. Any rational policy for camelids which cannot be kept in a badger free environment needs to do the same, not necessarily by the method I have suggested. Boosting immunity with levamisole could be considered.

I can email you PM films of reactors to tests - and when you see them you will have no doubt as to whether it is progressive or not. Egg sized lesions is an example. Open lesions in the throat is another. If you send me an email I will gladly send them to you.
Kindest regards
Dianne Summers
Camelid Tb Support Group
summersidanne@yahoo.com