This concerns ownership of the reactor animal, as presented to an abattoir as a TB reactor and the intention of Defra to swipe farmer compensation if the animal is presented in what is described as 'an unclean' state..

We are all aware of harrowing tales of herd restrictions meaning overcrowding, inadequate housing and lack of income,  leading to animals being in less than pristine condition for slaughter for human consumption, should that need arise.

But after a reactor is identified, it is Defra (or APHA) who organise slaughter, arrange transport and then present the animal for slaughter. And it is Defra who receive monies from the abattoir for the carcase. This is known as 'salvage'. In due course, the farmer is then paid the derisory tabular compensation he is owed for the animal he has in effect 'sold' to the Ministry.

So, at the time of presentation of the reactor for slaughter, is not responsibility for its cleanliness that of the present owner? ie. Defra?

And when does that 'ownership' begin?

Is it, for example, when the green DNA Reactor tag is applied? Thus several days or in some cases, weeks before it leaves the farm?

Conversely, it may be when it boards its  Ministry arranged transport, complete with passport, for its final journey?

But either way, on arrival at the abattoir, the reactor animal does not belong to the farmer, it is Defra's. And thus it could be argued that its condition as 'fit to slaughter' is Defra's responsibility too.

The alternative of course, is on farm slaughter, in which case, no salvage monies would be payable to Defra at all. 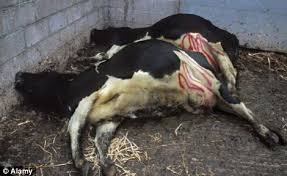 Posted by Matthew at 9:21 AM No comments:

Whenever Defra have a 'consultation' paper, it is to rubber stamp what they've already decided to inflict on the agricultural community. And so it appears with the latest one on tabular compensation for zTB reactors, following a public 'consulation' last year.

To inform Official Veterinarians that from the 1st November 2018 there will be changes to The Cattle Compensation (England) Order 2012 .

* Reduction in compensation of 50% for animals which arrive at the slaughterhouse too dirty to process.

* Reduction in compensation of 50% for animals brought in to a herd during a TB breakdown which are subsequently removed as reactors or direct contacts (DCs) prior to the herd regaining official TB free (OTF) status.

* Compensation to be paid for privately slaughtered reactors if they are found to be totally condemned for reasons of TB only.


Now, we would point out, with the greatest of respect of course, that many animals destined for Defra's funeral pyre, are not farmed as meat animals and thus maybe not be as pristine clean as they would be for planned slaughter, at the time of TB testing. We would also point out that abattoirs provide a clipping service for such eventualities, and charge between £10 and £15  per animal to clip it safely. And that is not half the animal's value.


APHA licenses to purchase cattle as replacements during the course of a zTB restriction, have always been at veterinary discretion, and were there to make sure that the business itself, and its throughput of milk or beef, could continue. That will no longer be the case.
Thus farmers who buy in with an APHA license while under TB restriction in order to continue their businesses, are being effectively put out of business - or forced to break the law in dealing with an external source of infection that Defra refuse to touch with a ten foot pole.


The full text of the document can be found here - [link]


Perhaps the most bizarre report to come out in the press recently was a BVA press release -[link] expressing concern about badgers trapped in cages during a heatwave.

Now we are not sure whether any members of the British Veterinary Association are aware that the badger cull starts in the autumn, the heatwave was experienced months ago, and has long since dissipated into default drizzle in most areas of the South West. But we digress. Some worthy individuals may be hell bent on vaccinating them.

But we suspect neither the BVA members, nor those proposing vaccination have seen the effect of a cage trap on this animal, who is likely to fill the whole area with soil and bury itself before curling up and going to sleep. Where one wonders where would this BVA water source be placed? And would said badger like a serviette to protect his peanuts from exposure to soil? Or even water?

It really is the silly season.

Meanwhile, on Twitter - [link]  Badgergate believe that we - just love that all encompassing phrase - should celebrate an over population of infectious omnivores in these islands as a success. They say:


We wonder why people aren't happy that England is the heartland of the European badger? We wonder why some only value something that's endangered. We wonder why on an island, impoverished in wildlife terms, why people don't celebrate badgers as a success?

If badgers weren't riddled with zoonotic tuberculosis, and spreading that bacterium far and wide while hoovering up every other small mammal, ground nesting bird or invertebrate in their path, perhaps those impoverished populations would stand half and chance, and 'we' would value their chosen species more.
Below a pic of hedgehog skins, left by badgers who peeled them like a large Jaffa orange, leaving just the prickles. 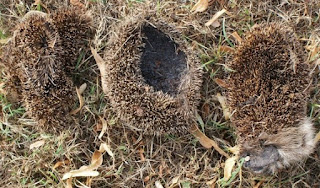 And finally dear old Rosie, supporting the above tweet of course, but with a selectively defective memory of her past work, tweeted - [link] this:

That Rosie, would possibly be because some of us heard your former boss, the diminutive John Bourne, echo Chris Cheeseman's comments when addressing cattle farmers who had enquired, quite politely, after hearing of the gross infectivity of these over abundant, over protected creatures, how they could protect their cattle from the infection they carried.

The answer was unequivocal. "You can't. You get rid of your cattle".
Posted by Matthew at 8:21 PM No comments: