We have spoken many times about overspill of bTB into other species, particularly alpacas. And we have spoken to Defra about this overspill too. Not with any great degree of success it has to be said - but hey, on this blog, we're nothing if not persistent, bloody minded ? tenacious.

We are aware of the cost and regulatory implications of flagging up bTB in group mammals other than bovines, but as cattle owners, we are equally aware of the problems which may occur for our animals (or clean wildlife), with onward transmission from such animals bouncing unchecked around the country, coughing up or excreting TB bacteria.
We face enough of that from translocated badgers.

From the alpaca TB support group we have data which just a handful of members have provided of their losses over the last couple of years. It is an eye watering over 422 animals. While another small group of alpaca owners, not members of this group, have lost a shed load more, with 28 going into Defra's mincer from just two breeders.

In July last year, hidden within a TB paper issued by Defra was the following snippet:

What Defra did not say of course, was when they would clarify these figures. And last week, we were alerted to a PQ answered by Defra minister, Jim Paice on just this subject.

Dan Rogerson: To ask the Secretary of State for Environment, Food and Rural Affairs how many mammals other than cattle were identified with or slaughtered for bovine tuberculosis as a result of (a) microbial culture sample, (b) reports from local veterinary practitioners, (c) gross pathology examinations by veterinary investigation centres, (d) disclosing diagnostic tests including intradermal skin or blood assays and (e) reports from Meat Hygiene Service examinations at abattoirs in (i) 2006, (ii) 2007, (iii) 2008, (iv) 2009 and (v) 2010. [89799]

Mr Paice: The risk to non-bovine species from TB is assessed as generally low and the surveillance system is therefore proportionate to these risks. This means figures are not collected or broken down by the specific categories the hon. Member has requested. Moreover, these scenarios are not mutually exclusive for a particular case and it would be difficult to allocate each case to one of these scenarios. In addition, TB in non-bovine species is not considered to have been “identified” until positive culture results are confirmed.

Figures from 1997 on the annual number of total samples from non-bovine animals that are (a) processed by the AVHLA laboratories and (b) found positive for M. bovis infection, are broken down by species and are available on DEFRA's website at:

(These figures do not include the number of animals slaughtered from a herd where TB has been confirmed when M. bovis is not cultured from that animal.)

So, back we are directed to these damn statistics which only count the primary, single sample which a) confirms bTB and b) identifies the spoligotype. No skin or blood test failures and subsequent slaughterings, no deaths with TB confirmed by pm, and no knacker collections. As we said in our posting of 2010, all these have disappeared. 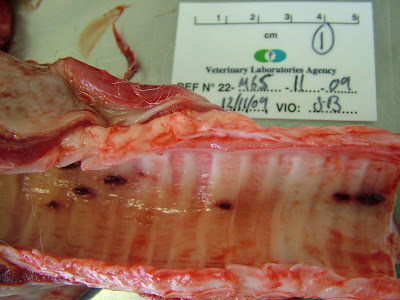 Defra seem to have quite a problem lining all their ducks in a row on this. They simply cannot count. This alpaca was not a primary sample death, so he too 'disappeared' - even with open TB lesions right up his trachea to his throat.


We aired the problem again in this posting as well. But the boss is more familiar with these duplicitous Ministerial shenanigans than perhaps we are. And while we would assume that these figures for alpaca (and other ) deaths are located 'somewhere', regardless of the minister's convoluted answer, he calls it deliberate and constructive ignorance.
Posted by Matthew at 6:50 PM No comments:

Everyone, from the Treasury's bean-counters downwards to your lowly bloggers, watch Defra's monthly TB statistics for signs of change. Over the past decade we have watched the inevitable and predictable rise in slaughtered cattle, as bTB has spread, unchallenged, through an increasing badger population. Until now.

But as well as delaying reactor removal , churning out - or not - paperwork, Defra's new toy, a computer system known as SAM, appears to have trouble adding up.

The monthly tally of tested slaughtered cattle, herds under restriction and confirmed outbreaks of (cattle) bTB can be viewed on Defra's website on this link. But the stats appear stuck at August 2011, with the following information note:

Good old SAM.
Posted by Matthew at 8:07 AM No comments:

Today the North Devon edition of the Western Morning News announced the preferred sites of the two pilot badger culls. From the report...:

One of the pilot areas will be on Exmoor and the other around Tewkesbury in Gloucestershire, according to industry sources.

But there will not be a pilot cull in Devon – a major bovine TB hotspot county and widely expected to be the location of one of the two – because it was difficult to get a sufficient number of farmers to sign up in the individual areas.

An area of North Devon, however, is one of two reserve areas for a trial, if either Exmoor or Tewkesbury drop out.

Natural England, the Government agency that will be handling the culls, will hold local consultations about the cull in the areas before they go ahead – so there is scant chance that the details about where and when will be a secret.

Now in his speech at the Oxford Conference which we touched on in this posting, Defra minister Jim Paice indicated that such actions were 'required by law'. By which law, or under what statute he did not explain, but cetainly when the Minstry's State Veterinary Service held the license, issued under the same part of the same Act, no such advance warning was given. In fact quite the opposite.

But then you can't believe everything you read in the press - this same article in WMN gives the cull area size as 30 sq km which could be a misunderstanding, a misprint or just plain mischief.
Posted by Matthew at 8:19 PM No comments:

The pennies start to drop.

As 2012 dawns, farmers and their representatives begin to grapple with the nitty gritty of the 'cull plan' concocted on their behalf by Natural England.
This is the operating protocol to which we referred in the previous posting as :

the most complicated, divisive strategy imaginable ...

... but one for which farmers must bear the undefined cost and clearly defined publicity. It appears from the press this week, that questions which we asked at the time of NE's publication are now surfacing.
A bit late, but there are a lot of pages.

Farmers Guardian published a long piece on the 3rd January, with the strap line 'Badger cull ball now firmly in the farmers' court'. Or put another way, 'This is your badger cull, this is how it's going to operate, now get on with it - if you can. The article defines the key concerns of farmers, which are and always have been - the timing, the cost and their security.

Timing looks as if the two pilots will be late autumn this year (post Olympic fervour) so another year bites the dust, as do several thousand more cattle.

Costs we have explored several times. Jim Paice is sticking with his £1.4 million + 25% contingency fund up front for each 150 sq km patch. That equates to £920 per badger. But the NFU have done their own fag-packet calculations and arrived at around £20. Until that gap closes, then we agree with Anthony Gibson's comments (made before he was hoovered back into the NFU fold) and aired in the posting below.

Unless these proposals are radically altered in the consultation process – particularly in terms of reducing the financial and other risks to participants – I find it hard to envisage a badger-culling licence ever being issued.

Quite so. But then licenses were never meant to be issued under these proposals and the costs relate to the operating protocol set out by NE and to which the 'industry' apparently agreed.

The security question is vital with the farming industry now at complete loggerheads with NE's proposals. FG reports that as far as the farming organisations go:

The names of farmers, landowners and contractors involved in the culling areas will not be made public. Neither will the exact timing of the culling operations.

Natural England’s guidance, however, states it should ‘give the public an opportunity to comment on the licence applications’. This has become a key area of debate between the licensing agency and industry, which is intent on preserving the anonymity of those involved .

And that is the problem. In their proposals, NE even go so far as to describe a '28 day consultation period with maps posted on parish notice boards'. That is what farmers are being asked to sign up to. And this was hammered home by Jim Paice at the Oxford Farming Conference this week.
Mr. Paice reminded delegates that: 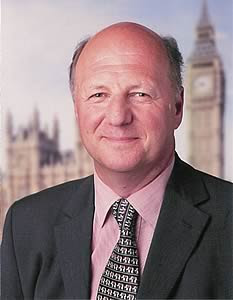 Natural England is required by law in each area to consult the public. We are in discussion with them about how precise the boundaries on those maps need to be,” he said.
“But I have to say as a countryman myself that once these trials are underway, the grapevines will work and I don’t think it will be possible to keep it secret.
“I am afraid farmers will have to take that into consideration when they decide whether to sign up. I don’t think there is anything more we can do in reality,” he told journalists, adding that he hopes this does not deter farmers from signing up.

If nothing else about this half cocked load of bureaucracy, that one paragraph is enough reason to hand control of a serious communicable zoonosis back to Animal Health, where it belongs. That organisation (or its predecessor, the State Veterinary Service) always held a general license and applied it under Section 10 of the Protection of Badgers Act when and if it was deemed necessary. Control of TB has no place in NE's portfolio. And it's no use at this late stage, the great and the good throwing a hissy fit when at last they are reading the small print of that which they've already agreed in principle. Or thinking they can change it.

This is bureaucracy gone mad, said NBA TB committee chairman Bill Harper. “Our concern is the maps used in the consultation will be too precise. We want them to be fairly general.”

and the NFU's John Royle added that:

the NFU was still trying to persuade the agency ‘not to describe the areas involved exactly’.

How exactly you do not describe areas, which by the terms of the NE license have to be displayed for a 28 day public consultation ? But as Jim Paice said at the Oxford Conference:

“I am afraid farmers will have to take that into consideration when they decide whether to sign up. I don’t think there is anything more we can do in reality,” he told journalists, adding that he hopes this does not deter farmers from signing up.

Really? You could have fooled us.
Posted by Matthew at 7:07 PM No comments: