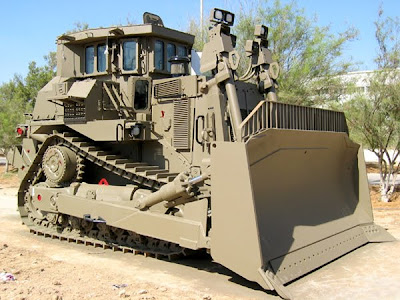 The Daily Mail reports that tunnelling badgers have caused huge problems to the safety of school buildings in Somerset. Click link for full story.

A primary school is under threat of collapse after badgers tunnelled underneath it and shifted 7.5 tonnes of soil. The school, which teaches 420 pupils, has been blighted by the badgers - leaving deep gaps in the foundations underneath two main classrooms. Parents and governors now fear buildings could cave in at Ashcombe Primary School, Western-Super-Mare, Somerset.

Our major concern is the fact that badgers have built or excavated under one of the buildings, which contains two classrooms. "These are elderly pre-fabricated buildings which need constant repair. The excavations by the badgers will have had some effect on the foundations.

"We worry that the buildings will collapse into the holes that have been left.

"Another problem is that the animals have brought their kill under the buildings, which of course we can't get to, so they decompose. All you can do is open the windows" ......

.
Read more of the antics of these weapons of mass destruction in this 2004 posting. We reported increases in tuberculosis in this posting and the predictable consequences for anyone getting up close and personal with diseased badgers, here.

The comments to this story are depressingly predictable. Forget the enormous damage to property and definitely air brush the risk to persons of discarded bedding, latrines or urine. You know, all those areas we farmers are supposed to fence off to protect our cattle from tuberculosis? Everybody just lurves badgers.... from a very safe distance which usually involves four walls and a settee.

Edit. The boss has sent his favourite pic of the appropriate 'earthmover' to illustrate this post. We are happy to oblige. 7.5 tonnes is a lot, after all.
Posted by Matthew at 7:55 AM No comments:

Following the Farmers Weekly report on Defra's new computer system 'SAM', which we posted here, another raft of problems appear to have surfaced. And the backlog of test charts awaiting input (and action), has reportedly increased to 1000.

Yesterday's Western Morning News, had the front page, an inside page and an opinion on all this. And the paper's 'Opinion' piece was not impressed by the mealy mouthed platitudes offered by a Defra spokesperson, which they describe as an:

"anodyne and jargon-spattered response from the department, which talks about 'new functionality' [ snip] and seeks to paper over cracks rather than come clean about its shortcomings."

The comment we note, is read from the same hymn sheet as that given to the FW, three weeks ago.

More of the problems with SAM are described in Farmers Guardian this week in a small snippet entitled 'IT Problems Hit Calf Exports. ' There is no online link, but the piece is as follows:

"Computer problems at the AHVLA Central Operations for Exports in Carlisle have seriously disrupted calf exports and it could be weeks before the backlog is cleared.
Exports were suspended on September 28th. and a statement sent to Farmers Guardian by the AHVLA said a new computer system was being developed to improve customer services, but problems in a new part of the system meant the agency was unable to establish the disease status of the some cattle prior to their planned export.

Although the article specifically mentions calf exports, this problem would affect all cattle exports, with breeding stock also snarled up. The window for exporting after a clear TB test is just 28 days from jab day, substantially less that the 60 day home market timeline, and export office vets at Carlisle would need to check the status of the consigning herd, as well as the log jammed test charts for these animals. And that apparently, they cannot do.

AHVLA problems with SAM are only one in a series of governmental cockups introducing new IT systems. The Telegraph describes a £12 billion bungle with NHS systems, following hard on the heels of the Fire Service's abandoned flagship which ratcheted up costs of £469 million of taxpayers' (borrowed) cash before being moth balled. The Telegraph piece on the NHS system notes that:

".. last month, the MPs on the Public Accounts Committee described the system (cost: £12 billion to date) as “unworkable”."

They haven't met SAM yet.

But all is not lost. While angry farmers were quick to point out on a BBC TV report, their own particular problems, snarl ups and confusing paperwork, ROD (perleese don't say Rod Who?) - Defra's acronym 'ROD' is the Regional Operations Director - a very nice man called Mark Yates appeared on camera to say that if farmers are experiencing any problems with SAM, they should report them directly to him.

According to his CV, Mr. Yates has been ROD for the South West for 2 years after a nine year stint in 'the army'. Now that could mean he was used to giving orders - or conversely, more used to taking them. But we digress:

For readers in other areas of the UK, every AHVLA region has its very own ROD and they can be contacted from this list.
Posted by Matthew at 7:05 PM No comments:

... war computer. And in particular, Defra's new toy, SAM. This system was due on stream in July, but three months on is apparently causing havoc. Farmers Weekly reported this snippet last week. (sorry, no online link)

".. how problems with the new [SAM] computer system and the loss of experienced administrative staff, have combined to create severe difficulties in dealing with TB paperwork."

The piece describes the morale of staff expected to 'lie to farmers' and the 'extra stress caused to lower grade staff'.
The report also describes problems with TB licensing experienced by one farmer, who having applied to move 20 animals, was given a licence for 23 including three breeding bulls, two of which had been sold. The final license sheet listed just 18 animals. So it would appear that manual overrides could be difficult, if not impossible too.

But with a unique piece of airbrushing, an AHVLA spokesperson gave the following comment to FW about Defra's new all singing, all dancing SAM computer system.

"This will improve the level of service provided to customers"

Not if the goddamn test charts aren't inputted on time, it won't. The main frame computer will generate a bloody shut down notice. Been there. Done that.
However

" ..... minor issues have been identified, and have now been fixed"

Really? How minor? And that backlog has decreased then? Yes? No?
No. Our information is that it has increased. The purring continues:

"During this time, additional manual checks have been implemented on all TB test charts and associated processes to ensure AHVLA is able to identify and remove reactor animals from farms as quickly as possible."

Additional manual checks? Why? So there is no backlog of reactors or test charts then?
According to many farmers we speak to, yes, there is. Mind, if the source was dealt with there wouldn't be any need for pernicious 60 day testing, abattoir slots, transport, or unskilled agency staff trying to log a million unique eartag numbers into a new computer system. But let that pass.

Sadly, all this sounds a tad familiar. Remember the phrase 'don't mention the war' ? We see a distinct parallel, and having been on the receiving end of a syrupy recorded message (twice) recently when trying to contact AHVLA, have a sneaking suspicion they may be turning the phones off. For hours at a time.
Nah, they wouldn't do that would they? What bit of 'Animal Health' is by passing the radar of Defra's top brass?

Of course they would. But don't forget, the AHVLA lady said it will " improve the level of service..."

What she did not say was when.
Posted by Matthew at 8:10 PM No comments:

.. is a well known cause of blood pressure when patients visit a doctor's surgery; the sight of pristine, dazzling white attire, guaranteed to cause a flutter in most of us.

So imagine the reaction of cattle, more used to olive green - be that grass, silage or the boss's overalls - faced with the eye catching vision of a man in a white coat advancing.
Like it, they do not. As was found a decade ago during the carnage of FMD.
The picture below, is by Chris Chapman and was taken on a Dartmoor dairy farm in 2001. Even normally placid dairy cows are looking askance at the ghostly figure as they are rounded up to be shot. These cows were sedated. Cattle gathered for inspection and TB testing by AHVLA operatives are not. 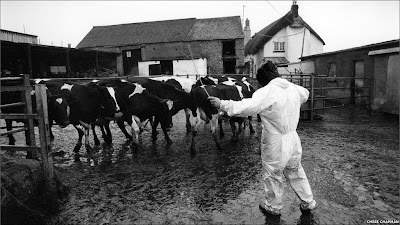 Or that was how it used to be until the arrival of Defra's new, all singing, all dancing and very streamlined central ordering system. This was designed to give economy of scale, with orders channelled through the Finance section of the regional office. We understand that since FMD, Defra staff are not allowed to use the infamous 'white overalls' in the field. This is partly to avoid media surveillance but mainly to avoid being squashed by freaked out cattle.

But guess what? Our moles tell us that what were delivered by a this new team of desk bound admin clerks (with no idea of the problems faced at the coal face and no remit to listen) were packs of tissue-paper thin, single use overalls. And they were white.

Why are we not surprised?

Update;
At blogger HQ, we are more than familiar with Defra's deskbound windowbox solutions to livestock problems, but our co-editor roared with laughter over the white coat scenario.

"Perhaps if they wore the overalls over their heads, at least they wouldn't see what is coming."

... was his erudite comment - while not identifying the 'they'.

As cattle farmers, we tend to call a spade a spade - and suggested the correct interpretation could be for AHVLA operatives to layer their 'never-to-be-used-again after the carnage of FMD', white tissue-paper overalls over the heads of the cattle. Simples.
Posted by Matthew at 7:07 PM No comments: