As another batch - [link] of areas in England get the go ahead from un-Natural England to cull infected badgers, the Police and Crime Commissioner of Derbyshire is not a happy bunny. He explains on the PCC website that:


“Badgers are a protected species under the 1992 Badger Protection Act and evidence shows that shooting badgers is not a viable solution to the spread of bovine TB. If this is the case, then it doesn’t make sense to pursue an expensive culling programme at the cost of the taxpayer. I am urging the Government to reconsider its position and to continue to invest in the vaccination programme in this county and beyond to protect what remains a threatened species for future generations.”

This gem was reported on the Derbyshire PCC website - [link] where this misguided person is promoting vaccination as a substitute for culling TB riddled badgers - who, after two decades of complete protection,  are anything but 'threatened'.

Methinks his protests may have more to do with the published costs of policing the culls, than any altruistic love of wildlife or a skewed view of the effects of vaccination. And as it is farmers who have personally coughed up many thousands of pounds, in order to mop up decades of governmental inaction and shirking of responsibility, the very least the police can do is uphold the law. All laws, not just some of them.

In a paper released last autumn, Defra estimate - [link] that the cost of policing culls will be around £255,000 over the four year main cull period for each area licensed. (p.7 of the linked report)
They explain:


The need for policing has been a feature of the policy to date due to the need to maintain public safety. It is likely that extending to eleven new areas will require a similar level of policing, at least in their initial year. However, police forces have consolidated their command and control structure for operations this year to reduce costs. It is a shared goal of Defra and the Home Office that policing should become business as usual for local `police forces and attract no additional costs. Over time, following further successful operations without security incident, we expect policing costs to disappear. This ambition is factored into our central scenario.

One benefit reported in rural areas, which rarely see a policeman, but are subject to all the guff that goes with 'crime' dressed up as joy riding, poaching or theft of valuable stock and machinery, was that anecdotedly of course, a drop in such cases was noted, as more police were around chasing badger activists. A group of people, who if they were not exercising their 'rights' to prevent lawful and necessary culls of overpopulated and infected wildlife, would actually cost the taxpayer - or the Derbyshire PCC - very little at all.

Posted by Matthew at 8:11 PM No comments:

The end of the line

Over the last few years, we've told the story of a farming couple, their fight both with zoonotic tuberculosis in their cattle which wiped out the whole herd, the debacle of misinformation which accompanied their restocks, and finally today, the end of line for a business and and a marriage.

In 2013, Louis and Gillian Bothwell gave us the inside story of their lovely herd of cattle - and empty sheds. - [link]
Farmers Guardian - [link] told the story in more detail in Gillian's own words. And we compared the trauma of these losses - [link] to Defra's antics over FMD.

After the restocking, we revisited Louis and Gillian's story and were shocked to find they were still in deep trouble. Louis had been persuaded by his Defra case officer to buy Holstein heifers from Europe. He reccomended northern Germany as a source of TB free cattle. But  within six weeks of arriving in the UK, many were diagnosed with Johne’s disease.

They also proved to have very high cell counts and losses were considerable.

Within the first year, and by the time the remaining replacement animals calved for the second time, one third of them were dead or slaughtered because of Johne’s disease.

Veterinary professionals confirm that tests for Johne’s are unreliable and unless clinical disease has been confirmed, single positive test results should be treated with care. These restocks were clinical.

We understand that there are known hotspots for this disease in Germany, and the area from which Louis Bothwell sourced his 'TB free replacements', as instructed by his Defra case officer, is one of them.

Thus two years on from the trauma of losing a herd of homebred UK cattle to TB, Louis and Gillian were faced with losing their German replacements to Johne’s.

And in a routine TB test in 2016, with no action taken on the farm’s wildlife vectors, the remaining cattle were once again under TB restriction.

That proved the final straw. As they calved, those remaining cattle were sent to direct slaughter.

Most of the farm is now let out on contract for maize and potato growing, with just a handful of acres let as grass keep. There are no dairy cows and the buildings lie empty; the unintended consequences of successive governments’ non-policy on ‘bovine’ Tuberculosis and misplaced advice from its officers.

Sadly it has also proved the final straw for this young couple's marriage, as well as their dreams and investments. Farmers Guardian - [link] carries the story this week. 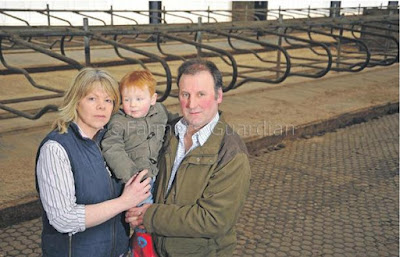 Posted by Matthew at 7:51 PM No comments: