The EU will be impressed.

As a contributor to the cost of GB's pile of dead reactor cattle, government has to submit an Annual Report - [link] on the eradication process to which they are signatories.

We note from the content that Defra are still using New Herd breakdowns as a benchmark in this paper, while conveniently airbrushing those herds still remaining under restriction firmly under the proverbial carpet.
The incidence of herd restriction due to zTuberculosis in GB cattle herds in 2014 - [link] was 11.15 per cent of registered herds. In 2013, it was slightly higher at 11.4 per cent and significantly more than the figures submitted to the EU. But does it matter?

On 20th Nov 2003, Ben Bradshaw answered a Parliamentary Question - one of 538 posed by the then Shadow minister, Owen Paterson, MP - on this subject:


Mr. Paterson: To ask the Secretary of State for Environment, Food and Rural Affairs what assessment she has made of the OIE limit of the incidence of TB in cattle necessary to maintain TB-free status trading for the UK, expressed as a percentage of the national herd. [140308]


Article 2.3.3.2 of the OIE Terrestrial Animal Health Code states that for a Country or zone to qualify as officially free from bovine tuberculosis, shall satisfy the following requirements:


Bovine tuberculosis is notifiable in the country;


99.8 per cent. of the herds in the considered geographical area have been officially free from bovine tuberculosis for at least the past three years as disclosed by periodic testing of all cattle in the area to determine the absence of bovine tuberculosis.


Periodic testing of all cattle is not required in an area where a surveillance programme reveals that 99.9 percent of the cattle have been in herds officially free from tuberculosis for at least six years.

And we dare to send this bilge Annual Report into the EU, begging for more money, when our level of disease is rumbling along at over 11 per cent of our herds? 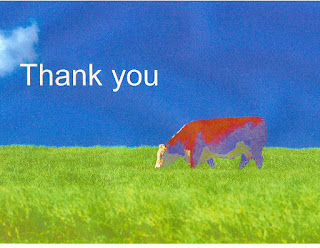 So when Defra illustrate the final page of this quaint package with a picture of a Hereford cow, quietly grazing the green grass of GB's pastures, and  mark it  'Thankyou',  she has nothing to thank our Ministry for. 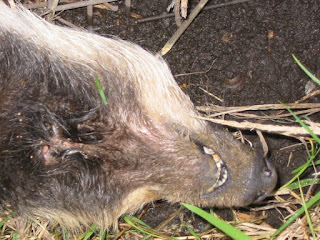 They have it perfectly clear that they prefer one of these, (right) grossly infected and roaming her pastures, to keeping our cattle safe, and our ability to trade intact.

So it must be a 'Thankyou' to the European Union for sending more of our cash back to us, so that that we can kill more cattle - just like the one in the picture above.


The EU will be impressed  with GB's progress on badger vaccination and other prevarications, so 'Thankyou' just about sums it up.

Posted by Matthew at 8:48 PM No comments: