Norway is said to have been TB free in its cattle since 1963.

The last confirmed case of 'bovine' tuberculosis was in 1986, when the disease was found in a dog.

That is until now, when Internet site The Cattle Site -[link] report an outbreak thought to originate in alpacas imported from England. 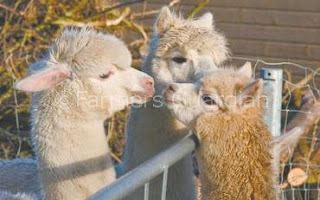 "A shipment of British Alpacas is behind a rise in bovine tuberculosis in Norway.


Bovine tuberculosis (TB) has been spreading through Norwegian alpaca herds following the arrival of 28 Alpacas from southern England, the Norwegian Veterinary Institute has announced.


Twelve Alpaca herds are now infected with bovine TB after the batch reached Norway in the autumn.

The Norwegian Veterinary Institute reported the 'problem' on 22nd May - [link] with added information that the animals were being subject to further serological testing after failing skin tests. Direct translation thus:


In a importisolat for alpaca in Eastern Norway is suspected of storfetuberkulose. There are positive reactions on skin test (intrakutantest) as well as complementary serological tests on several animals that are the background for suspicion.

28 Animals were imported to the appropriate isolatet from Southern England in autumn 2013.


In England is a comprehensive tuberkuloseepidemi on herds.


In addition is detected at the dozens of nysmittede alpakkabesetninger annually.


It has not been demonstrated storfetuberkulose in Norway since 1986.

This translation implies that this consignment of British alpacas at least, is held in quarantine after positive skin tests and pending further serological testing. The comment also points out that England has a comprehrensive 'tuberculosis epidemic' and detects dozens of infected alpaca herds annually.

Norway has been officially TB free since 1986. More on this, as and when we receive it.

Yes we will.
Posted by Matthew at 8:12 PM No comments:

BRAN - the tale of a 21st Century badger.

This simple cut and paste (left handed) from a Facebook page, illustrates so graphically the fate of a tuberculous badger and his trail of destruction as his life ebbs slowly away. We quote it in full with thanks to the author: 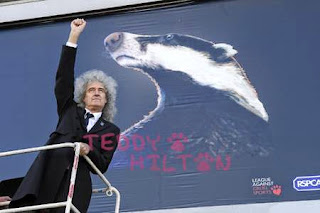 BRAN - the tale of a 21st Century badger.

"Early spring, and life was good for Bran the badger.
The weather was mild and food was plentiful. The cubs, his cubs, were just starting to leave the sett and explore the woodland. Bran was the strongest badger in the sett, and in his prime at three years old.


A bright full moon illuminated the sett in the woods. Bran sniffed the air, suddenly alert - something wrong. A new smell, sour and rotten. Not the enticing scent of a dead rabbit, this was foul, repugnant, terribly wrong. He paused, puzzled, and heard a sound of pawprints, coming his way.

He tensed, hackles lifting, ready for fight or flight. And a badger appeared, a stranger, its eyes oddly piercing bright in the moonlight. Bran lifted his top lip in a snarl as the stranger came closer. It was painfully thin, its face sunken, its coat dull and dry, its breath rasping noisily. It half choked as it snarled at Bran. And in an instant he understood. That stench, that awful rancid stench - the Rotting Death, the Old Ones called it. Your insides died, turned to pulp, while the rest of you kept on living. Three moons, maybe four, till it finished you.

Bran screamed at the stranger - GO AWAY! We don't want you here, clear off! The stranger's eyes blazed with fury as it leapt at Bran. For a few minutes they fought, the stranger with surprising strength for all its emaciated condition. It bit Bran hard on the underside of his neck, and hung on. Bran squealed with rage and pain, and snapped again at the stranger's face. And suddenly the fight was over - exhausted, pus and blood soaking its dry coat, the badger turned and fled.

Another moon, and a warm early summer night. A terrible change had come over Bran - he was lean now, and his coat was dry and harsh. His joints were stiff and aching, and the wound on his neck was hard, tight and swollen, throbbing painfully with every step he took. Constant pain had made him angry - one of the cubs had jumped on him playfully, and he'd turned on it, snapped at it, cracked its skull with his powerful jaws. The other badgers, his family, were restless now.

That stench, the awful rotting death stench, was everywhere in the sett, permeating every tunnel and den.

They were waiting for him as he came home in the first light of dawn, all suddenly hostile, snarling, blocking the entrance which had always been his. Bran stepped towards his brother Jem, the ringleader, it seemed. How dare he? Jem stood his ground. Go, he said, you must go, now. Furious, Bran jumped at him and they fought bitterly. Jem grabbed Bran's neck and bit hard, bursting the painful swelling. Pus and blood shot out, spraying both badgers, and Jem jumped back in surprise. Bran bit him hard on the belly before turning and running away, heading north, away from his sett, homeless and alone now.

Another summer moon. Bran had a new home now, a dry ditch, cool and shady. He hated being so close to the little town, but there was food there, so he had no choice. A silly terrier pup had found him in his ditch the other day and wakened him with its yapping. There was a scuffling fight and Bran bit it, sending it yelping back to its owner on the footpath.

Bran was a pitiful sight now on his moonlight travels. His eyes were sunken in his lean face and his body was emaciated and tucked up. His once-glossy coat was dull and flecked with pus from the weeping abscess. He was too weak to dig for food now, so his claws had grown long and curled over, and his breathing was shallow and noisy.


The short summer night was nearly over when he reached the gardens in search of food. He found a discarded biscuit in a child's sandpit, and ate it slowly, without pleasure. There was a toy dumper truck in the sandpit so he piddled on it, marking his territory, before lying for a few minutes on the sand, enjoying the coolness on his burning abscess, pressing it into the moist sand.

As he headed home across a field of cows and calves, he paused again, aware that he had been spotted - the farmer, walking across the field to check on his stock, saw him and cursed, the joy all gone from his day. There had been no TB on the farm for sixty years, but he'd known it was coming ever closer. And there was a tuberculous badger - no, please God, not now, not my cows.......

Mid morning. The terrier was in the vet's surgery, his owner concerned about the ugly puncture wound and her pup's lack of energy.

In the garden, a little boy played happily in his
sandpit, engrossed with his beloved dumper truck, making new roads in the cool moist sand. 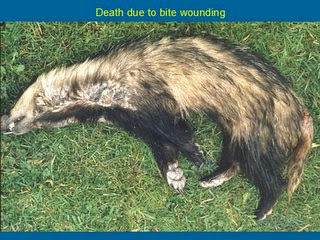 Back in his shady ditch, Bran slept fitfully, even in sleep tormented by the bluebottles buzzing round his oozing abscess.
The rotting death would release him, but not yet.


Work at FERA confirms that the number of Britain's badgers infected with zTuberculosis, is in some areas, up to 53 per cent.
Posted by Matthew at 9:56 AM No comments:

Please refer to Warmwell -[link] for any TB updates, for the time being.
Posted by Matthew at 10:56 AM No comments: