As the EU collects its various bits of  past Animal Health Acts and bundles them into one new Act, which was accepted in April 2016, comes into force in 2021 and which we described in this posting = [link] the European Food Standards Agency (EFSA) has also described our  pathetic efforts  one sided plans for eradication of zTB.

They describe efforts to eradicate zTB from a Great Britain by concentrating on killing  sentinel tested cattle, when the bacteria is hosted in a wild maintenance population, as 'highly improbable'.


In principle, the risk-mitigating measures should be effective and proportionate; the disease has been eradicated in several countries and the prevalence at EU level has decreased following implementation of the specific legislation above and the so called ‘trading directive’ Council Directive 64/432/EEC as amended and the conditions laid down by the OIE and WHO.


However, in some settings, the risk-mitigating measures are neither effective nor proportionate, in particular, the measures laid down in the legislation apply solely to bovine animals, but M. bovis is not a single host pathogen. As a fundamental epidemiological principle, a disease which is shared and maintained independently by a range of species in the same environment cannot be effectively controlled only by addressing the problem in one of the affected species.


If the control measures are not applied to all epidemiologically relevant species - either farmed (goats, alpaca, deer, pigs, sheep) or wildlife (badger,wild boar, deer) then eradication of tuberculosis in bovines will be highly improbable.

This a map of member states of the European Union, where zTB has been successfully eradicated by test / slaughter in most states. Bottom of the pile in 2015 is GB (including Wales). 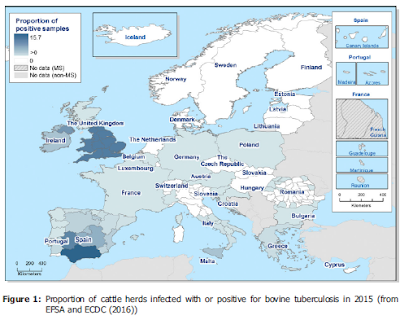 
" A herd prevalence > 10–20% is reported by the United Kingdom in Wales and England, with a reported highest regional prevalence in the EU of 17.7%. "

Those figures are beyond appalling. And in 2016, at 107, 000,000 euros, the cost of the UK's stupidity is more than the totals of the next five countries affected added together.
It really is time the extremists on both side of this debate were kicked firmly back to their respective boxes, thus allowing Defra and the farming industry to eradicate the bacterium itself, rather than any host it may have infected.

Posted by Matthew at 8:08 PM No comments: