In our last posting we explored the bizarre - [link] and ridiculous release protocol for badger rescues, illustrating the post with a pic of a tattooed stripey which had expired in West Wales. Where had he come from? we asked. A member of Facebook asked the same question and this was the reply from Secret World.


The policy followed by Secret World is the best possible, as advised by these scientists, to minimise the risk of disease transmission and ensure good animal welfare. We work extensively with private landowners to ensure they understand our policies, that any release sites are suitable and that we have their full consent for any releases. You can read more about our release process on our website.


The badger photographed was a cub released in 2011. The cub was tested three times for bovine TB, as is our policy, and was vaccinated before release.

Actually, as our Parliamentary questions showed, release protocol dreamt up by these charities, was not approved by Defra, but let that pass. That assertion was contradicted in a later paragraph from SWorld.

So where had this rescue (now dead) originated? Secret World had not answered at first, but later volunteered this gem:


"It came from the 'low risk' area of Essex. Other animals in that group originated in areas of similar risk".

So a T.O.W.I.E 'rescued' in Essex, reared and tattooed in Somerset, and released in 'someone's' orchard in West Wales? Are they short of badgers in that part of the UK? Is it TB free?
What a mind blowingly stupid idea.

The question was posed as to the geographic spread of released badgers from these centres. The answer:


"I am not in a position to discuss exact sites for releases, not least to maintain the confidentiality of those landowners who work with us.


The aim is to release badger cubs (not just from Secret World, but from all rescue centres around the country) as close to where they were found as possible. This is for both genetic reasons, as well as being good practise for disease control (not just TB)."

It's just about as far as you can get  from Essex to West Wales without getting wet feet, but let that pass.
The answer continued:


"The distribution of release sites depends on availability, but broadly mirrors the population of badgers across England and Wales. So more badgers are found and released in the south west of England than anywhere else. All adult badgers go back exactly where they are found.


Most cubs rehabilitated at Secret World are released in the south west of England. When we decide which cubs to release where, this is based on a risk assessment that includes consideration of where they came from and where they are going."

Mmmm. But 42 11 W, an Essex badger, ends up released in a TB hotspot in West Wales? Which hardly fits the described 'protocol' does it?

Secret World - [link] is registered with the Charity Commission - [link] documents from which, show its income in 2014 as around £1.15m. Better than cattle farming then? 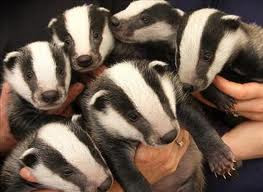 Now it seems pretty ironic to us, that having seen an increase - [link] in main setts of 103 per cent in England over the last few years, combined with a disease level of around 50 per cent (FERA figures) in the South West of England, (an area which is presently putting together population reduction strategies to control a grade 3 zoonotic pathogen) that such outfits as Secret World should be introducing more badgers into the area from Lord knows where.

Anyone want a badger or three? Just contact Secret World. We are sure they'll oblige. Possibly for a fee?

From their comforting blurb, for the dead badger with the tattoo 42 11 W, obviously the only way should have been Essex. But not so: he was adopted by a landowner in West Wales, and died there.

Credit: Facebook.com/BadgerCullPage
Posted by Matthew at 9:56 AM No comments:

You learn something new every day.

Long years ago when we were phrasing up Owen Paterson's Parliamentary Questions on zTB, most were crafted already knowing the answers. We just wanted the rest of you to know too.

But this week, we have learned that on one subject we did not probe far enough.

And that subject is the translocation, following the rescue - [link] and release of badgers.

So as this week saw the further ratcheting down on cattle and extra testing, we must update our readers on that omission.


Mr. Paterson:" To ask the Secretary of State for Environment, Food and Rural Affairs what the sensitivity of the test used on translocated badgers is in (a)positive response and (b)negative response. [150583]


Mr. Bradshaw: The test, which is generally used, for the detection of TB in translocated badgers is a test for antibodies (the Brock Test). This is generally accepted to have a low sensitivity (the ability to detect diseased animals). However it is difficult to give accurate values for the sensitivity because euthanased animals are not always subject to laboratory culture.


Where a badger translocation is carried out under licence (from Defra or English Nature) each individual badger is tested three times. If any of the three results are positive, the badger is euthanased. Any other badger that has been in contact with the positive testing badger is also euthanased, regardless of the results of its own tests


Where an orphaned or previously injured badger is translocated by an animal centre or similar body they follow a voluntary code of practise (drawn up by the RSPCA, National Federation of Badgers Groups and Secret World Wildlife Rescue).


Any animal to be relocated is tested three times and, if it tests positive, is euthanased.


This protocol does not advise in the destruction of badgers who have had contact with a test positive badger.


It should be emphasised that this voluntary protocol was not devised or approved by Defra. "

But that is only half the story, as TB Information - [link] has discovered. On the site there is a link to a document drawn up to facilitate the release of rescued badgers.

And from that little gem, we note that the guff contained in the answer to PQ 150583, (above) does not apply to ADULT badgers. They are not tested as to do so would mean a long period of captivity to accommodate the 3 tests plus weeks in between. And that would never do.TB Information also reports:


About 70 badgers each year were reported in 2007 to be released by the wildlife rescue centre called Secret World.


Although it recommends testing badger cubs, it says the following regarding the testing of adult badgers.


* An adult badger should not be blood tested for bovine TB for the following reasons:


* It will be released to its original location, so eliminating the opportunity for the spread of disease to new areas;


* It is unlikely to be held in captivity long enough to conduct three blood tests.

Marvellous isn't it? Cattle nailed to the floor, tested to extinction and the major UK wildlife reservoir of disease is rescued and released, translocated and fostered, 'accustomed to life in the wild', using, if it's used at all, a test with sensitivity of around 47 per cent. 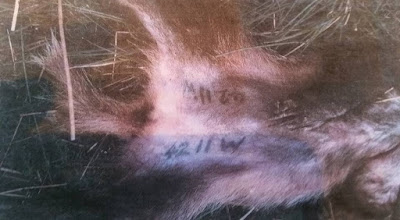 We're grateful to a member of The Farmers forum - [link] for the above screen shot of a badger found dead in Wales.
(Credit : TFF and Facebook)


As you can see it's sporting a handsome tattoo - 42 11 W - so from where did it originate, to end up squished on a  roadside in West Wales? And why is this crazy situation still going on at all?

This zoning has nothing to do with how you farm or the health status of your cattle. It is dependent on where you happen to keep your cattle. And in particular, the relation of that location to endemically infected wildlife.
Farmers Guardian - [link] has the details. 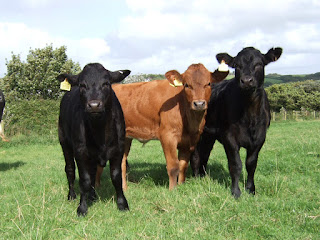 Posted by Matthew at 9:28 AM No comments: