Almost a year ago, we told the tale of the National Trust badger vaccination programme on its Killerton Estate - [link] in the Exe valley.

This area was a hot spot for cattle TB anyway, and the Trust decided to spend copious amounts of funds, and gain not a few brownie points by vaccinating some of its resident badgers. How many out of the total residing in Killerton's woods, it has no idea. And for results on cattle TB incidence, we have had to rely on farmers in the area, Defra flatly refusing to release stand alone figures for these latest playgrounds.

But this weeks, Farmers Weekly reports a pedigree beef herd - [link] on the estate, as going under herd restriction. From the notice on his gate, the farmer is less than happy. 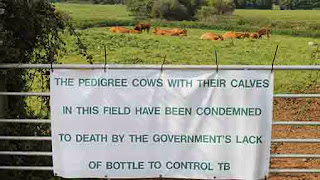 And tonight, BBC local television network interviewed a very unhappy dairy farmer in a similar position. In fact we hear of several new herd breakdowns on the estate after 4 years of playing in the woods, with infectious badgers.

But the reason for vaccinating badgers, Defra tells us,  has nothing to do with the incidence of TB in cattle. Thus to collate and publish cattle test results in those areas, would they say 'be quite wrong'.

In 2011, they produced a paper with this little gem (and have repeated the doctrine many times since):

To build farmer confidence? Not with the farmers on the Killerton Estate, that's for sure.

And as we have said before, what an extraordinary reason for promoting a vaccine which doesn't work, for a zoonotic disease which kills.

If you're as thick as two short planks, (or a May Queen badgerist) possibly you could be forgiven for getting things hopelessly wrong, but this site - [link] is said, quite proudly, to be 'managed by Defra', so in theory, anything it publishes should be correct.

So why is their September 5th post, flagging up Channel 4's "First Time Farmer's" problems with the disease whose full title is 'mycobacterium bovis' calling it a goddamn virus?
(Impolite note to Defra's apparatchiks - the clue is in that title.)

They describe the programme thus:


"The deadly Bovine TB hits the young farmers’ herds with a vengeance, and first to feel the full force of the disease is 24-year-old Charlie. The brutal virus is wrecking his investment in cattle, and now that the entire herd is quarantined, his livelihood is under threat. Robbie’s herd is smaller but just as vulnerable and is also quarantined. Robbie’s built-up a side-line in farm-reared pork, and turns to selling piglets to keep the cash flowing, but will it be enough?

No wonder this country is in such a mess with this disease.

On the other hand, this 'mistake' follows so many, that we really are not surprised at all.

(Actually, reading this through, we have been quite mild in our criticism. The grammar is crap too. The piece tells us that  "24 year old Charlie is the first to feel the full force of the disease"? That's a bit old for a bull isn't it? And we assume  that the First Time Farmer has not succumbed to zoonotic tuberculosis - yet. Sheesh.

But what we really think of these Jack and Jill 'mistakes' could not possibly have a place on a family blog.)
Posted by Matthew at 3:24 PM No comments:

It's ten long years since we started this site: mainly as a vehicle for information already collected about zoonotic tuberculosis, its effect on the wild maintenance reservoir in this country - badgers - and the epidemiological facts dragged out of Defra in the 538 Parliamentary questions which form the base.

We are now seeing projects come around again, wearing different clothes, and some extraordinary statements made which mean that current research projects have (in our humble opinions, of course) a very shaky base on which to stand. 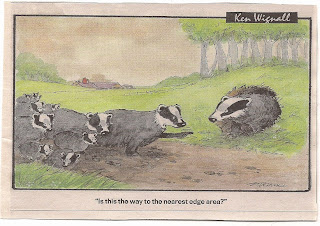 Last week, Defra announced the rolling out of  badger vaccination - [link] in the current 'Edge' areas of England. We say 'current', because as a moving feast, what was an 'Edge' last year, could quite easily be included in high incidence this year.

For example, road kill badgers examined in Cheshire are showing a 24 per cent infection rate with farms following suit at an alarming rate.

So wherever Ken Wignall's badgers were heading, may not be an 'Edge' any longer and infection in its badgers is likely to be, as in Cheshire, considerable. Defra's data, as usual, is way behind the curve.
(Grateful thanks for permission to use the cartoon, published in Farmers Guardian 05/09/2014)

Now you know very well our take on badger vaccination - [link] , doled out indiscriminately to an unscreened population, on a very ad hoc basis. And seeing the take up of matched funding, (£20K out of £250K is a figure we've seen quoted) for these projects, maybe Queen May's badgerists know they're on a hiding to nowhere too.

But our first contradiction comes in with Defra's outright refusal to publish results of ongoing vaccination areas - and there a few now - on the cattle who share these contaminated pastures. In fact the answer to that request earlier this year was an unambiguous 'No'. We quote it below:


"You asked that we consider adding data to our monthly bovine TB statistics to separately report on the Badger Vaccination Deployment Project (BVDP) area in Gloucestershire and the Intensive Action Area (IAA) in Wales. We have no plans to do this at present.


The purpose of the BVDP is to learn lessons about the practicalities of deploying an injectable vaccine; provide training for others who may wish to apply for a license to vaccinate badgers; and build farmer confidence in the use of badger vaccination.


So it would be wrong to use TB statistics for the area to assess the benefits of badger vaccination on TB in cattle." 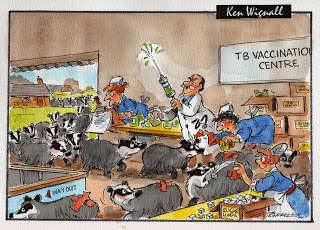 Well pardon us for pointing out the obvious, but if not to 'assess the benefits' on cattle reactors and farm breakdowns, what are you doing this for?
(Grateful thanks again to Ken Wignall and FG for use of the cartoon)


The second contradiction comes with a text book answer from the delectable Dr. Cheeseman, ex director of Woodchester Park badger heaven, where peanut fed pets continue to employ many of Cheeseman's successors.

'Thornbury' he snorted both on Radio 4 and Countryfile last week, when presented with the 100 per cent success that the badger clearance there had achieved in just 8 months, (not 25 years) was not a research project because it had no 'control' area.
Mmmm. And the IAA in Wales, undergoing everything but badger culling, has?

Not according to their latest report - [link] which describes on p.6 (of 56) how their Control area may not be comparable at all. In the same genre, they criticise SAM too as unable to identify 'different sorts of breakdowns'. They point out:


Limitations of the report and study design.


"In other words, the purposive selection of the IAA and the difficulty in finding a CA with equivalent bTB incidence reduces the soundness of evidence that any observed differences in bTB incidence are due to bTB control strategies, rather than other differences between the areas in the epidemiology of bTB....."

From what we can see in those long awaited (but out of date by a long mile) graphs, apart from Defra's continuing reluctance to see the difference between 'Incidence' of disease (new breakdowns) and 'Prevalence' (those which fail to clear with testing and slaughtering cattle, bio-garbage or anything other than clearing out infected badgers) the IAA has not made any headway at all.

And who's bright idea was it to lump a badger vaccination programme into the same area as intensive cattle measures? Not very sensible, but neither seem to have had the desired effect, in a realistic time scale which Thornbury most certainly did.

There is a more readable description of these IAA cattle measures and more, on this site - [link] And we will once again remind readers that these cattle measures have all been done before - [link] and ended in inevitable, ignominious and expensive failure.

Our final contradiction is the current obsession with shooting badgers, or rather the thorny question apparently irritating Defra,  'is it humane' to shoot badgers? In mainland Europe, no such sensitivities get in the way of dispatching these animals if they are causing damage to land or property, and 66,000 were shot -[link] last year, from August to October in Germany,  seemingly offending nobody at all.

So these contradictions can be dismissed as pure prevarication - a further excuse for doing nothing at all.
Posted by Matthew at 9:15 PM No comments: