Coming hard on the heels of this posting where we decided not to bash our collective heads into brick walls anymore, Defra have issued the following press release today:

Cattle testing positive for Bovine TB are to be DNA tagged to further strengthen controls preventing spread of the disease.

Evidence is emerging that some cattle farmers in the South West and Midlands may have been illegally swapping cattle ear tags. That means they may have been retaining TB-positive animals in their herds and sending less productive animals to slaughter in their place.

Retaining cattle that test positive for TB on a farm increases the risk of spread of TB to other herds and wildlife.

To strengthen deterrents, from mid-April cattle testing positive for TB will immediately be tagged and a sample of its DNA retained by Animal Health. These samples will then be cross-checked at random, or where fraud is suspected, against the DNA of animals sent to slaughter.

“I am absolutely appalled any farmer would deliberately break the law in this way. The vast majority of farmers with TB in their herds are doing the right thing, and it’s reprehensible that anyone should be trying to get around the tough measures that are helping to control TB in cattle. Anyone doing this sort of thing will be caught and have the book thrown at them.

“We are introducing this extra safeguard to minimise spread of this devastating disease to other herds and wildlife.”

The alleged evidence of fraud has emerged from an investigation instigated by Gloucestershire Trading Standards, which reviewed TB cattle sent to two slaughterhouses. Investigations are now ongoing there and at slaughterhouses in the South West and Midlands.

“We are appalled at this emerging evidence of TB reactor fraud, and we strongly condemn any such behaviour. We urge the farming industry and the veterinary profession to continue to work together with the Government on the swift and decisive action announced today.

“We have given clear advice on what measures should be put in place quickly to tackle the problem. This suspected fraudulent behaviour by a few farmers should not be allowed to unfairly damage the reputation of the responsible majority or to undermine the TB control regime.”

"This suspected fraudulent behaviour by a few farmers should not be allowed to unfairly damage the reputation of the responsible majority or to undermine the TB control regime.”

Quite so.
But it will.
Posted by Matthew at 7:55 PM No comments:

The FUW (Farmers union of Wales)today welcomed a decision by badger campaigners Pembrokeshire Against the Cull (PAC) not to repeat misleading claims in a leaflet distributed to homes in the county and published on the internet.

The decision comes after a complaint by the FUW triggered an eight-month investigation by the Advertising Standards Authority (ASA). PAC has since agreed not to repeat the advertisement and to amend problematic claims in line with the ASA’s Advertising Code.

FUW TB spokesman Brian Walters described the decision as a “welcome U-turn”. He added: “It is unfortunate that it took an eight-month investigation and the publication of a draft ruling by the ASA for PAC to finally cave in and admit that they published misleading claims, but we are glad they have finally conceded.

“PAC’s decision to accept they were wrong means the ASA has allowed the complaint to be closed informally, saving PAC the embarrassment of being ruled against in a formal adjudication.”

The original leaflet - which has now been removed from PAC’s website - claimed that "2 ½ years after the [badger] cull finishes, this benefit [the reduction of bTB] disappears"; that "WAG’s cattle measures are inadequate, and it has signally [sic] failed to address the most important route of infection, cattle-to-cattle"; that "there are no plans to control the movement of cattle within, into or out of the [north Pembrokeshire culling] area based on TB risk"; and that "Vaccination will help with TB eradication, culling will not".

“The ASA agreed with us, and PAC has now been forced to admit they were wrong. This gives out a clear message to politicians and the public that messages issued by single issue groups established to protect badgers need to be taken with a massive pinch of salt.

Pembrokeshire Against the Cull is a newly established organisation with only one objective, and as far as I am aware they were previously indifferent to the nightmare TB epidemic which has faced Pembrokeshire farmers for decades.

Conversely, the Farmers’ Union of Wales has been involved in the science of bTB for more than 50 years, and our views have been established following careful gathering and consideration of all the scientific evidence over a period of decades.

We don’t want to see either badgers or cattle being culled, but when you are faced with a massive disease epidemic in both animals you have to take action.”

Ends
Posted by Matthew at 7:55 AM No comments:

For some time now, we have been considering the time and effort which all of us put into this site.
It was built on the 500 Parliamentary Questions on bTB, badgers, badger welfare, bTB transmission and general epidemiology which were lobbed by our co-editor at the then Minister, Ben Bradshaw, in 2003/4. We wanted to collect as much information on our own experiences with herd restrictions, on TB transmission opportunities and on other country's efforts to clear this disease.

Support has come from a number of sources including farmers, veterinary professionals, scientists and wildlife operatives. We all had a single aim: that of healthy cattle and healthy badgers.

But over these six years, things have moved on and now alpaca owners are wringing their hands as 'environmental' TB rips through their herds. Similarly pig owners face TB restrictions which have no legal exit route except the skin test, which is not an option for many. Cats, dogs, bison, sheep, goats and deer have all made headlines which we have conveyed to you. While Defra have been noticeable by their absence in support for the true level of other species 'over spill'

Did we say bTB was a beneficial crisis? You bet we did.

In mid February, while a couple of us were busy preparing cattle for sale,(having dutifully pre movement tested them) a site comment late on Friday night had us reeling. No, not a scumbag dealer switching eartags, but one of the most high profile pedigree breeders in the country, drives a coach and horses through everything we have been trying to achieve over the last decade. No matter that none of this site's contributors have shifted restricted cattle, bounced them between holdings or presented unidentified cattle of unknown parentage for veterinary inspection. We're all tarred with the same brush, the damage is huge and the reaction, brutal.

Needless to say, the Badger Trust lumps us all together though.

And tonight another comment has found its way to our inbox. This describes how a Shropshire veterinary surgeon has been found guilty of not discharging his duty in respect of a TB test on a restricted farm.

No matter that we have yet to find our own vets wanting in this respect, and no matter that it is not the norm. Reports like this are seriously bad for our industry - and music to the ears of all those who do not want to face the fact that TB is endemic in badgers, and that over population has now exploded that disease into other mammals.

So, on balance, we have achieved nothing. And we have decided that enough is enough. 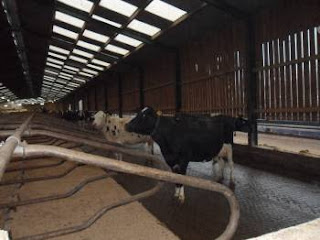 We will leave you with a link to a Farming Forum where a very dedicated and upset farmer is about to consign this lovely, healthy cow to the Defra killing machine.

By the time most of you read this, she will be dead.
Posted by Matthew at 6:35 PM No comments: