There's a hole in my bucket,

The rhyme goes around in a large circle and comes back to the very same start point. The hole in Lisa's bucket.

And unfortunately for cattle farmers, the Government appointed quango, Animal Health and Welfare Board for England (AHWBE) under the tutorship of Michael Seals, appears to be doing exactly the same thing.

It was in 2012 that Defra's bean counters - (link) decided that the TB budget must be reduced and reduced considerably. And true to form, the redoubtable Mr. Seals went to work.

Several bright ideas were floated, and although most were completely rejected by the industry, like Lisa's leaking bucket, they keep bouncing back. But as Mr. Seals points out, in true Defra speke:


"This is not a single issue. It is not just about wildlife or cattle movements. It has many different causes on many different farms and that is something some people find hard to admit or accept.”

Rubbish. Tuberculosis is the single issue. Not badgers and not cattle. And Parliamentary questions, so reluctantly answered by Ben Bradshaw MP a decade ago made it clear that it's eradication most definitely is a single issue.
Albeit one which Defra would rather not deal with.

When badgers were removed from a small area of Gloucestershire, the cattle remained clear of TB for at least ten years. So we asked why this should be.
The answer was recorded in Hansard for posterity - if not Defra staff:


The fundamental difference between the Thornbury area and other areas in the south west of England, where bovine tuberculosis was a problem, was the systematic removal of badgers from the Thornbury area. No other species was similarly removed. No other contemporaneous change was identified that could have accounted for the reduction in TB incidence within the area" Hansard 24th March 2004: Col 824W [157949]

And of course it would be churlish to point out to the AHWBE that many other countries using the same screening test for cattle, and slaughtering reactors, in the absence of a wildlife reservoir, are TB free.

Another bright idea this quango has thrown around is the 'Accreditation' of cattle herds - [link] , which is a way of tying herd health in with the usual bag of cattle diseases, about which cattle farmers can do something. What an insult! To lump a disease over which cattle farmers have little or no control, with BVD, IBR, Johnnes and leptospira - over which most can and do exercise much control.

But Mr. Seals is nothing if not a dogged follower of instructions: and cattle farmers are again urged to back the strategy - [link] - with all the rigmarole attached to bovines and their trading that this entails.

And sadly, the man is still talking about insurance, - [link] when at least ten years ago the loss adjusters described TB claims as a "haemorrhage on their farm business budgets", which were otherwise profitable. And once again, a Parliamentary question confirmed that Insurers no longer offer this cover. The full question and answer are below:


5th Dec 2003: Col 629W Mr. Paterson. To ask the Secretary of State for Environment, Food and Rural Affairs whether farmers are able to obtain insurance cover for TB infection in [dairy] cattle after a TB breakdown and subsequent claim. [141083]

And the quite explicit (if not for Mr. Seals, the AHWBE and the Treasury) answer was thus:

"It is government policy to pay compensation at 100 per cent of market value, with no upper limit, for cattle that are compulsorily slaughtered under TB control measures. Farmers therefore do not need to take out insurance on their animals. Theoretically, insurance can be bought to cover other consequential losses for which compensation is not paid, but that is a commercial matter between farmers and their insurers. Section 34 (5) of the animal Health Act 1981, explicitly allows insurers to deduct the amount of Government compensation from the value of any payout they may make. Insurance companies will make their own decisions on whether to insure, and about the size of the premiums, based on their assessment of risk.


Recent contact with the insurance industry in early 2003 indicated that, although companies were honouring existing policies, they are not offering new policies to cover TB in cattle herds, particularly in areas where TB is increasingly prevalent. This is because farmers do not wish to take cover in areas where the risk is low (such as Yorkshire) but do wish to purchase cover in areas of high incidence (such as the South West) However, the insurance companies consider that the financial risks in offering insurance policies in areas of high incidence are too high at present."

That's pretty explicit isn't it? Farmers need not take out insurance. Defra are contracted to pay 100% of valuation, but even if they wanted to insure, exposure to risk is likely to be too high for them to get cover.

In 2006, the year in which we wrote that piece, the cost of insured TB cover increased tenfold, and that cover halved. That's if you were lucky enough to still have a policy in place, and not been unlucky enough to have made a claim. Any farmer who has made a claim, is uninsurable.

But still the charade continues. In 2013, a series of facilitator led meetings - [link] were held to try and shoehorn these pesky cattle farmers into Mr. Seals' blueprint. After all, we're told often enough that without farmer co-operation, there can be no strategy.

But on February 7th Mr. Seals gave an interview to political editor of the Farmers Guardian, Alistair Driver. And guess what? Like the hole in Lisa's bucket, the same old, same old -[link] same old came around again.
The cost of this non strategy, who pays and some outrageous suggestions for plugging the financial gap, if not the disease one.
Mr.Seals explained:


For me it has always been about creating what I call the English solution; finding a structure which suits England in terms of our disease status and our needs on the ground, delivering services to farmers.”


It was also necessary to define areas which ‘only Government could deliver’, such as badger culling, he said.

Not expanding on the fact that successive Governments have absorbed into statute any semblance of control of this wildlife reservoir - and then, since 1997 have chosen not to exercise their responsibility, he concludes:


“There is one thing for certain about this particular disease - you cannot avoid politics of one form or another and Ministers are in charge".


Yes, I think we had finally got that message. With so many mentions of 'pump priming' us to accept the concept of vaccination and other prevarication gems, it is crystal clear.

And what is also clear, is that without a policy inclusive of meaningful control of the UK's wildlife reservoir of disease, Defra's TB strategy bucket is still as full of holes as the one in the old song.
Posted by Matthew at 8:52 PM No comments:

In this post, we highlight the 'indescribable frustration' - [link] of a small family run dairy farm trying to cope with politics; which at the moment seem hell bent on protecting badgers, grossly infected with Tuberculosis at the expense of their cattle.

For decades this farm had been clear of TB on annual testing, and ran a 'closed herd' using AI and breeding all their replacements, thus buying no stock in.

So in Badgerist mantra, their cattle should have been fine? Safe - in theory.

But in 2008 they had a brush with zTuberculosis, losing just a couple of cattle, before going clear and staying clear until April 2013. During this time, they invested £9400 in 'badger proofing ' their farm buildings, and also buying their own manure spreading equipment.

In fact doing everything they could to protect their cattle. 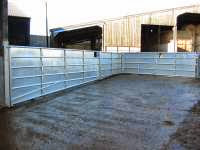 This is one of the entrances to their cattle yards, with newly erected shiny, sheeted gates which badgers are said not to be able to climb over, slither around or squeeze under..

They were erected in September 2008.

The herd remained clear until spring 2013. 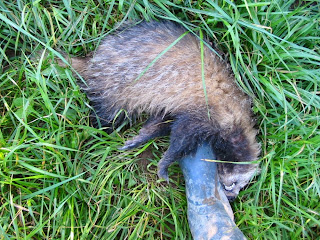 Unfortunately, cattle grazing ground is pretty well impossible to 'protect' and in the spring of 2014, dead badgers were found near the farm buildings. And at the TB test that summer, more cattle were lost.

This badger was photographed in March 2014 just before the herd was turned out to grass.

The 60 day tests rolled on for this herd and in September, 13 animals were disclosed as reactors.

These are two of  those thirteen. When she was slaughtered, the black heifer was 6 months in calf and carrying a heifer calf, having been inseminated with sexed semen. 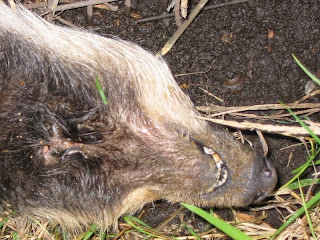 In early November 2014 a moribund (that means half dead) badger was found crawling around in broad daylight outside the cattle yards.

This was the badger a day later on November 9th.

Or it may have been a different one. This one is dead and has what appear to be open tuberculous abscesses in its throat..

But for this small farm, far worse to come. The legacy of the miserable specimen above, photographed on November 9th 2014, has, in their January test been the deaths of 25 more heavily in calf, homebred cattle.

So as our well publicised modelers, shunt their cattle assumptions - [link] into their electronic machines, believing and recycling their own guff, please humour us.
Why not put a few infected badgers into the mix as well?

Ones like those photographed dead in the fields of this biosecure family farm, with no bought in cattle and no cattle contacts, excellent biosecurity and no shared equipment. But which last week lost 25 cattle in one hit and has a running total of 47 dead cattle, revealed in TB tests since April 2013.

(With grateful thanks to TBInformation - [link] for allowing us to highlight this story, originally published on their site January 2015.)
Posted by Matthew at 7:27 PM No comments: