From the Conservative home webpage - [link] comes a rather spiteful  and loaded piece which implies that farmers want to kill badgers for fun. And because (allegedly) AHVLA's newly published partial statistics show an apparent drop in incidence, then there is really no need to as cattle controls (many yet to hit the farmers concerned) are obviously working.

Without going too deeply into the minutiae of SAM, the new computer system which is supposed to calculate these things, suffice to say his data are not comparable with the figures of old. Neither is it reliable.

New herd breakdowns are important and for sure, figures for those were the ones which Defra lobbed periodically into Brussels. But they hid the rump of registered herds stubbornly under restriction with zTB outbreaks, which testing cattle and killing reactors failed to clear. And that was far, far higher. In fact the last time those figures were available, over 10 per cent of GB's herds had experienced TB restriction in the reporting period.

Thus the difference between cleaning up an epidemic in a single species and eradicating it in more than one is quite simple.  If you shoot one and not the other, eradication will not happen.

That is the difference between 'incidence' and 'prevalence' of disease.

Figures for zTuberculosis can be argued ad infinitum, with each side wheeling out an 'expert' complete with his mathematical model and predictably  conflicting view. But published data, based on actual AHVLA risk assessments - [link] put TB outbreaks attributed to badgers in area of 'endemic' TB at around 80 per cent.

So read and learn Tory toddlers at ConHome. If every cow in GB was placed in a hermetically sealed box for the duration, the disease hosted by badgers would continue to upspill into other mammals, and from them to their owners -[link] and vets. As it has started to do already. - [link]

And no amount of 'managing' statistics - [link] rather than the disease, a Grade 3 zoonotic pathogen which governments have a statutory duty to eradicate, will alter that.
Posted by Matthew at 9:08 PM No comments:

As easy as ABC?

We have long held the view that any sort of zoning - [link] or 'risk based trading' of cattle would be bureaucratic, divisive and always running behind the problem - especially if you were unlucky enough to farm in a 'dirty' area.

That's 'dirty' as in rampant with infected wildlife, which Defra would rather not touch with a very long pole, rather than anything whatsoever to do with cattle. 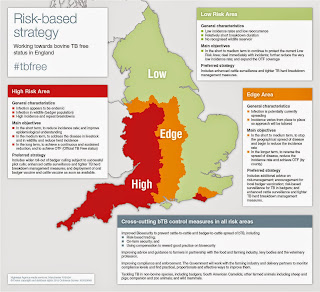 But having carved the country up into dirty, High risk, Edge and clean  Low risk areas - rather too late for some areas, it seems - [link] - we wondered if an animal based certification scheme for the whole country may not be a more workable idea.


In another life, and contributing greatly to MAFF staff pensions, many of us joined the voluntary EBL (Enzootic Bovine Leukosis) eradication scheme. The country eventually became EBL free so these schemes were no longer needed, but the way they worked was to issue the farm with a certificate of compliance which accompanied any cattle sold.

The certificate was an official State Veterinary Service document, having the farm name and holding number on the top and then a gap for animal details.. Any animal sold from the farm was accompanied by a copy of this document, and to keep its EBL status, wherever it was, it had to be retested by the date on the paperwork which is this case was three years from it's clear blood test. In effect an MOT for cattle.

So, would this work for TB?

The result of the last TB test is important, but the due date of the next one is crucial.

Rather than divide up historically affected areas, assuming but not really sure that 4 year testing areas are clear of the disease, why not issue an Animal Based Certification of TB testing after a clear test, with the date of the next due test on the paperwork?

This would not penalise or stigmatise any farm unlucky enough to have experienced a breakdown, but would ensure that cattle traded into 4 year testing areas were tested on the consigning farm's regime, at least once. It would also be a reminder to people buying from farms in these so called 'clean' areas, who may be  dispersing cattle just before a herd test is due.

The 'due date' could be flexible enough to include the animal at a routine test - within reason. But should farmers not comply with this requirement to test, then if the animal concerned was subsequently found to be a reactor, compensation could be affected.
(Steers due for slaughter could be exempt as abattoir surveillance would pick up any problems. )