Keeping them out of mischief...

We have mentioned many times on this blog, the sneaky - and we have to say very successful -ways government has prevaricated over the issue of bovine Tb.

The prime aim has been to massage individual industry egos, and then send them off to 'help' the minister to come to a decision. And they've done it. The NBA (National Beef Association), the TFA (Tenant Farmers Association) and now the CLA (Country Landowners Association) have all spent hours producing Tb strategies for our Ben. The NFU (National Farmers Union) had started to herd the cats together, under an 'Industry' banner, but like cats do - they scattered when the NFU logo took precedence over any other ego (sorry, title) .

Launched at the Dairy Event September 21st, the CLA document is comprehensive and detailed. We confidently expect the minister's minions to be combing through it with a fine tooth comb, to find the gaps between this and the others, thus ensuring that Mr. Bradshaw proceeds in his 'non-policy' with all the speed of an arthritic slug.

From Mark Hudson, Chairman of the CLA:

" Let us not forget that this is a battle against disease, not a vendetta against a single species. Control and eventual elimination of bovine Tb is essential for animal and human health. Our strategy is not an a la carte menu where preferable items can be chosen and the less palatable ones ignored ......"

The paper can be viewed on www.cla.org.uk
Posted by Matthew at 7:02 AM No comments:

The answer to Bovine TB? 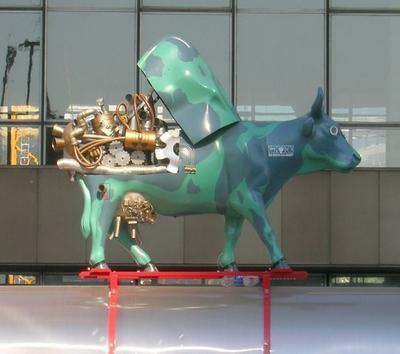 Courtesy of Polblog.
Posted by Richard at 7:30 PM No comments:

Defra's ability to spend YOUR money.

The 'project' ran for just 10 weeks, 16th August - 31st October 2004, and aimed to estimate the overall effect on bovine tb in cattle of two different control strategies. Trapping followed by shooting or gassing.

* "Important assumptions remain untested, and further data is available but has not been used in this project".

* The pilot was a short (understatement!) preliminary study involving significant levels of uncertainty.

*The results of the study are not robust enough to provide evidence to support or reject methods of culling badgers.

* Defra has funded an additional 2 year project, which seek to build on the findings of the original study, to refine the assumptions used and to validate the findings with independent models and existing data.


One might interpret the 2 year project as "validating significant uncertainties"and at a projected cost - based on the 'pilot study' which has given such un-robust results - of £443,000.


I think we get the picture.

S t r i n g i n g it out, not grasping the nettle, hiding behind the RBCT until another election?

One tiny comment snuck into Defra's abstract and guaranteed to be missed by most of the mainstream media recycling press releases, we shall reprint in full:

"An early assessment suggested that between 26 and 85% of the cattle herd breakdowns (CHBs) were not linked with new cattle being moved onto farms and thus might be associated with other reasons. e.g. badgers."

On the other hand, you may find something else lurking. Tuberculosis.

Over the past four years, the valleys of the Rhondda, and now Powys in South Wales have seen an 'amplifying situation' regarding Tb in human beings. That's 'expert-speak' for getting worse. Much worse, and in groups of people who are not usually associated with the disease but who nevertheless are vulnerable. Primary school children and teenagers.

We make no comment on this story, but offer the following comments and quotes with sources where appropriate.

* GPs are being asked to be vigilant after 40 cases of tuberculosis were found in the Rhondda and Taff-Ely areas of south Wales in just over a year.

* An oubreak control team has been set up after this alarming rise.

* To put it in perspective, experts say they would have expected about a dozen cases in this time.

* Doctors say they have at present no explanation for the dramatic increase in these specific areas, particularly as there has not been a corresponding rise neighbouring areas with similar social conditions etc.


* The growing problem of tuberculosis in young people has been highlighted by a south Wales health authority, which has detected 50 cases.

* Three people have died, including one child.

* Most of the cases in south Wales have developed in clusters and are among children who have never left the UK.

* One problem has been ensuring that diagnosed Tb sufferers took the full 6 month course of the various antibiotics to cure them. Without the full course, at least one-third of people with TB will die from the disease, and another third remain chronically ill.

* Another problem has been the development of resistance [of the Tb bacteria] to antibiotics.

* Two cases found in a school at Porth, Rhondda.

* A Cardiff scool child is 'no longer infectious' after prolonged antibiotic treatment.

From the area, various 'interested parties' including the FUW, health officials, vets and local people have updated us on this very serious situation.

* Two schools in Powys the latest to report problems amongst their pupils. They are small primary schools at Kerry and nearby Dolfor.

* The lesions in children from these schools are typical of m. bovis, i.e in the neck glands.

* Such lesions may be operable, but any postmortem material is usually dunked in formalin prior to basic slide examination. DNA for strain typing is then more difficult (expensive?) to extract. Some lesions may involve the pituitary gland. Treatment is with an antibiotic or cocktail of antibiotics, one of which has particularly nasty side effects.

* The strain or spoligotype of this particular tuberculosis is of 'non human origin'.

*The strain may be a mutation between an ethnic (non UK) m. tuberculosis bacteria, which is now hosted by badgers.

* It's original source could have been from raw or partially treated infected human sewage, to which badgers gained access.

* Many dead badgers have been seen in the area.

* Although there are no setts on the school playing fields, badgers have latrines there which are accessible to the children.

* Local councils fear exposure of the problems would lead to the closure of the schools, one of which has around 40 pupils.

As we said, we have deliberately not made any comments on this story, except to say short term sticking plaster politics is not going to protect the children or the badgers of S. Wales from what is a nasty, virulent and potentially fatal disease.

The Farmers union of Wales has warned that the over protection of badgers could lead to hedgehogs becoming as rare as red squirrels.

Referring to figures released by the Mammals Trust, which suggest that hedgehog numbers have fallen by more than 20 percent in the last four years, they say that ongoing research funded by Defra, and carried out by Richard Young also points to a massive rise in badger numbers as the source of the problem.

Mr. Young has suggested that high numbers of badgers would have "serious consequences for the persistance of hedgehogs in rural areas of the UK". He continued, "Surveys predict that badgers can achieve sufficiently high densities to exclude hedgehogs from rural habitats altogether".

Previous studies in the early nineties showed that badger predation may be influential in shaping hedghog populations, but the present study aims to investigate the effect of badgers on hedgehog abundance and distribution on a larger scale. Using 5 of the RBCT areas the study will examine in depth, the response to manipulation of the badger population density over a 3 year period.

The abstract can be viewed at :
www.ehrg.org/2004abstracts

The Effect of Badgers on Hedgehog Abundance and Distribution. Richard Young.