News this week from the Cattle Health Certification Standards (CHeCS) scheme, and reported in the Vet Times - [link] that Defra and the Welsh Assembly Government are seeking to add zTB (zoonotic Tuberculosis) to their list of non-statutory diseases screened for under the scheme.

"Farmers who take part in the Cattle Health Certification Standards (CHeCS) bTB Risk-Level Certification Programme – available through existing CHeCS cattle health schemes – will also be able to market their animals as being at lower risk of contracting or passing on the disease.

As well as reducing risk of infection, the initiative – which has the backing of Defra and the Welsh Government – could present risk-based trading opportunities for farmers selling cattle from regions with a high risk of the disease, or those wishing to minimise exposure from bought-in animals.
It also offers recognition for efforts to help Government and industry strategies aiming to control infection."

This idea of shafting a statutorily notifiable disease onto a voluntary body dealing with non-statutory cattle diseases was first mentioned by the Chief vet, Nigel Gibbens - [link] in Farmers Guardian earlier this year, where he said:


“Defra is currently working on a new scheme which will allocate a TB risk score to every herd in the country. The idea is to incorporate this into the Cattle Health Certification Standards scheme to give buyers more knowledge about the cattle they are buying.

“The two-tier market is already happening,” added Mr Gibbens.
“Risk-based trading will just make it better informed. Forty per cent of holdings in the HRA have never gone down with TB. If people engage in risk-based trading it allows those farmers to benefit from their good practice, although some people are just very unlucky because the environmental challenge is so high.”


Very unlucky?!
How on earth can Defra lump a disease over which farmers have had no legal control whatsoever, if it trundles in on a wildlife vector (as around 90 per cent of incidents do in the HRA) with diseases like BVD, IBR, Johnnes and Leptospirosis?

And where does Mr. Gibbens get his 'forty per cent of holdings' never had TB from??
Obviously not the same place from which this information came, or he would see that in the South West heartlands of his quaintly labelled 'environmental' zoonotic Tuberculosis, only a handful, some 2- 5 per cent of dairy herds have never had a breakdown since 1990.


With thanks to Bovine TB information - [link] for the AHVLA chart, dated 2013. 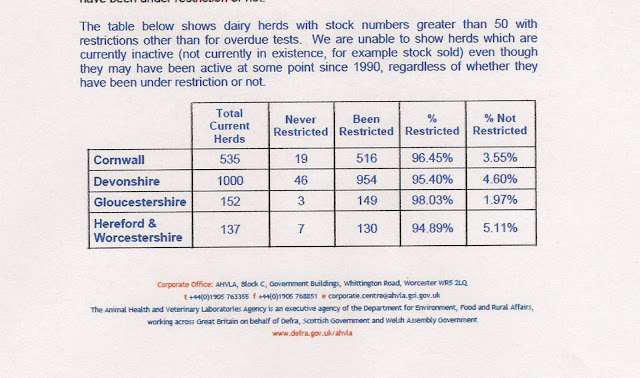 We would also point out, with the greatest of respect, of course, that:

It wasn't farmers who trousered £1m in 1997 and stopped all badger culling "to prevent the spread of disease", as licensed under the Protection of Badgers Act: Section 10 (2) a.

It wasn't farmers who then employed the most political of all scientists and allowed him free rein with a £74m so-called trial, which he was proud to say, had a predetermined conclusion.

And it wasn't farmers who oversaw a spread of this 'environmental challenge' as Gibbens so quaintly describes TB in badgers, from 6 or 7 hotspots in 1996 to the unholy mess we see today.

So ‘very unlucky’ doesn’t even begin to cover this complete abdication of responsibility by Government, which has overseen cattle slaughtered as reactors to TB rise from 3,881 in 1996 to 36,000 in 2015.

And that isn’t ‘very unlucky’ at all. It’s Governmental negligence on a grand scale."

So this summer, rather than address the spread of disease through wildlife reservoirs, Defra appear to have put a great deal of effort into passing the proverbial. Having shafted control of the badger population to disparate, widely scattered groups of farmers, they now attempt to foist fictional control of a statutorily Notifiable disease - a Grade 3 zoonotic pathogen - into  the hands of the voluntary Cattle Health schemes.

Putting us all on a scale of 1 to 10 won't solve the problem, or stop its spread through the wildlife.
Posted by Matthew at 8:44 AM No comments:

Yes, we know that sequence is the wrong way round, but in the case of APHA / Defra and anyone in charge of our exports, it is most definitely the way to go. Blindly firing. And putting international trade at risk.

Even though they are well aware that the skin test on some class of animals (alpacas) is about as rubbish as it gets, and even though they also know that a much more accurate - [link] test is available.

This time, following on from an international incident concerning the export of alpacas to Norway - [link] (with zTB), calves to Holland [link] (with zTB), we have now exported another infected alpaca (or more) to Belgium. Cultures from this animal, exported last year, were described thus:


The TB isolate obtained by the Belgian Government was of a spoligotype whose ‘homerange’ (geographical area in which it is most frequently recovered) in the UK includes the county of origin.

So made in the UK. In fact due to the 'regional accents' - [link]' carried in the DNA of strains of m.bovis, identified down to the county it originated from. 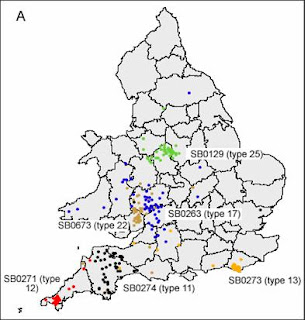 Are we stark, staring mad?

After Brexit - or even before that -[link] - our trading partners owe us no favours whatsoever. And will be looking for any chance to block our exports, without the department responsible for Animal Health offering this type of opportunity on a solid silver platter.

Posted by Matthew at 6:29 PM No comments:

Several papers this week have reported the ongoing problems of badger earthworks in an ancient churchyard. The details do not make for easy reading. But they do show quite clearly just how far these exalted animals have risen. Cult status has been awarded and with the Ancestral home given a grade 1 listing, they have a value way above that of mere mortals, it seems.Even in death. 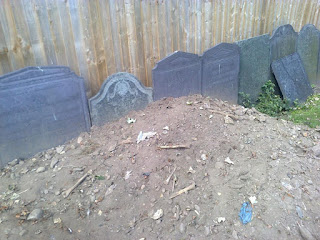 This desecration was reported by the local newspaper in May 2105 - [link] but obviously nothing was achieved by approaching Natural England to move the culprits on. And then there is the thorny question of where exactly to move them to?

This week, after a long, hot summer, the problem has re-emerged with a vengeance. The Huffington-Post -[link] reports that skulls, pelvic and leg bones have been unearthed, some belonging to children,  in a heap of excavated soil some 2.5m wide and 1m high.

was the accompanying strap line.

The Church is the 13th century All Saints Church, Loughborough, Leicestershire.The occupants of this sacred ground would have been from the surrounding area. Their remains now scattered and gnawed.
Posted by Matthew at 9:14 PM No comments:

This week and wonderful film was released, telling the story of one herd of beautiful Longhorn cattle, and their battle with so-called 'bovine' TB.

Instigated and partly narrated by their owner and breeder, the film tracks over thirty years of joy and success, ending in death for these cattle and heartbreak for their owner.

It also shows the indomitable spirit of many farmers, who try, and keep trying, against all the guff thrown around, to find a way through to a sensible solution for control of this zoonotic disease.

And finally it shows how many of our universities and civil service, while appearing to help, are actually in the grip of 'group conformity', a phenomenon explained here - [link]


"Within the group scenario, therefore, there is no premium in conveying accurate information. It is far more important not to diverge from a narrative supported by high-prestige persons. Personal prestige depends on conformity with the peer group view. It is conformity, not the truth, which fosters prestige.


Conformity is everything: facts are optional."

With grateful thanks to Mrs. Quinn and the film crew, for this wonderful but sad portrait of livestock farming in parts of Great Britain, today. From Stockyard of the world, to graveyard, in just three decades.
That is the legacy successive governments have left.
Posted by Matthew at 10:03 AM No comments: