A couple of points relative to our postings below, but more specifically for camelid owners, can be found here. (Click the 'NEWS' button on the top menu bar).

On the spread of TB from the colourful 'Maginot line' which they drew in 2009, for the 2010 map, Defra describe the spread thus:

There has been evidence that suggests there has been some further limited geographical spread and increased risk of TB in certain areas. As a result, for 2011 the core annual testing area has been expanded in some places, and the whole of the two year testing buffer has been widened, particularly in Cheshire and the East Midlands. In doing this the two year testing buffer and background four year testing areas have been brought in line with the requirements of EU legislation (Directive 64/432/EEC (as amended).

That statement - or understatement - on parish testing intervals (PTIs) is explained more fully:

The new PTIs came into effect on 1st January 2011 and are detailed below in the ‘England PTI List’. Animal Health has written to herd owners individually to confirm what their parish testing interval and herd testing interval will be.

But Animal Health will not have written to camelid herd owners, as by statute they have no control over identification, movement or disease control of these animals.

Thus the new regulations which began on January 1st, and which we looked into in that posting, do not apply to camelid herds. The alpaca TB website has more. They explain that they have been inundated with enquiries from camelid owners, following these changes in terminology and consequential action on TB breakdowns, which they assumed included camelids. They do not. For the simple reason that, as we pointed out, Defra still have no statute to cover TB in any other species than 'bovine animals and farmed deer'. During communications to confirm the position, senior Defra policy officials explain:

There are no ‘officially’ TB free herds of camelids in the UK for the simple reason that they are not routinely screened for TB with a validated ante-mortem test as most cattle herds are, plus there are no agreed criteria for designating camelid herds as ‘OTF’ (Officially TB free).

Those that are NOT currently subject to movement restrictions due to an infection confirmed by VLA should at best be regarded as ‘TB status unknown’.

The changes apply only to cattle, farmed buffalo and farmed bison herds, which (unlike camelids and other non-bovine farmed animals) are within the scope of EU Directive 64/432/EEC and, therefore, subject to mandatory routine TB surveillance by tuberculin skin testing at regular intervals.

Current TB policy relating to camelids, which was updated recently can be found on the Alpaca TB website on this link.

Meanwhile, tuberculosis continues to ravage camelid herds, (and cats, dogs, free range pigs and many other mammals) despite Defra's other species statistics indicating problem? - what problem ?
Posted by Matthew at 7:21 AM No comments: 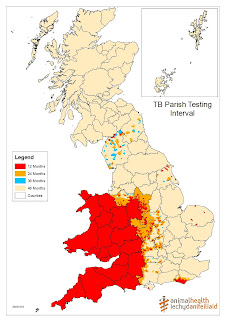 Last year Defra produced a new Parish Testing Map, with areas shaded red having annual testing and the buffer of orange on two year testing.
This was the 2010 map. 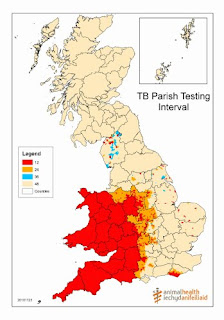 And this one (left) is their 2011 version, showing how the insidious spread of bTB is now creeping northwards, north eastwards and east of the original hotspots. 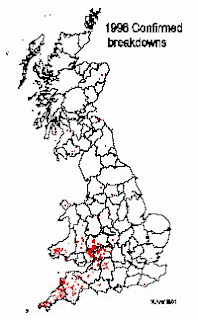 To illustrate how decades of ministerial prevarication have affected the spread of bTB, this is a map of confirmed breakdowns in 1996 (right). This is not quite comparable with the maps above, but every confirmed breakdown would instigate an annual parish testing interval. 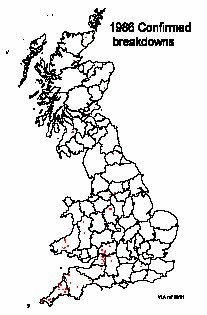 There are about eight major 'hotspots', (seen in the 1986 illustration (left)) which apart from expanding, had not changed in their geographic area or the spoligotype found there, in the time that TB breakdowns and badger postmortems had been logged by VLA.

We have been told that bTB tracks through the badger population, carried by 'dispersers' kicked out of their social groups and on the roam, at around 10 miles annually. So any guesses as to how long before Defra's map is solid red to the coastline of the North Sea and the Scottish borders?
Posted by Matthew at 6:19 PM 22 comments:

... to 'mislead', or 'cause to believe something incorrectly'. Or all of those, with a touch of duplicity and hubris thrown in. Details below.

On November 8th 2010, Defra released a bundle of papers on the vaccination of badgers with an accompanying press release which explained:


A key finding of the field study, conducted over four years in a naturally infected population of more than 800 wild badgers in Gloucestershire, was that vaccination resulted in a 74 per cent reduction in the proportion of wild badgers testing positive to the antibody blood test for TB in badgers.

With the help of our resident scientific team, we explored the background to this in various posts throughout November, and early December.

Meanwhile on December 1st, the the BBC launched their campaign, with the strapline:


In a four-year project, UK scientists found vaccination reduced the incidence of TB infection in wild badgers by 74%.

This was picked up by lazy media tarts journalists, and flipped around the world.

The 'consultation' on whether to cull badgers infected with tuberculosis, closed on December 8th 2010 in England and December 17th., in Wales.

The Badger Trust cite the BBC report in their submission.

But on December 14th., one week after the close of the English consultation, and with just hours before the close of the Welsh one, Defra issued a sort of retraction or plain English explanation of this bundle of research papers. And it says categorically that some media interpretation of this data, should not have been used to make the claim:


1. The findings in the paper were reported by some sectors of the media to mean that vaccination produced a 74% reduction in the proportion of badgers that had TB: e.g. "In a four-year project, UK scientists found vaccination reduced the incidence of TB infection in wild badgers by 74%."

The data should not be used to make this claim.

The results of the field study actually show that BCG vaccination of free-living badgers reduced the incidence of positive serological test results by 73.8% (a new incident being a badger that changed its test status from negative to positive during the study). This is not the same thing as saying that vaccination reduced the incidence of disease by 74% as a negative blood test is not an absolute indicator of protection from disease, so the field results cannot tell us the degree of vaccine efficacy.

Data from the laboratory and field studies do not lend themselves to giving a definitive figure for BadgerBCG vaccine efficacy, defined as the reduction in the incidence of disease (new cases) among badgers who have received vaccine compared to the incidence in unvaccinated badgers. A definitive figure for efficacy could only be determined by field-testing the vaccine on a large scale over a long period of time. Several thousand badgers would need to be killed to determine the presence and severity of TB at detailed post-mortem examination."

This paper was not released as a follow up press release to Defra's November 8th. offering, and neither was it released hard on the heels of the original misleading simplified BBC version which got the Badger Trust so excited. We are grateful for sight of it. As were Farmers Guardian who had the story on the FG online edition of January 4th.

So dear readers, what do we make of the time line on this?

* A bundle of papers and their million annexes on badger vaccination, released in a blaze of glory just a few weeks before the end of a consultation on whether (or not) to cull badgers infected with TB?
* The media scrum, led by the BBC and supported with quotes from Messrs. Cheeseman and Macdonald, offer their spin that 'Scientists have found that vaccination reduces TB in 800 wild badgers by 74%'.
* The consultation closes in England.
* With hours to go to the Welsh consultation deadline, Defra offer this little gem to their in-house group. "The data should not be used to make this claim."

Too bloody right it shouldn't. But it was, and it was not corrected until after the event - or at least the English event. And then only released within the magic circle of Defra's TB section.

And under those circumstances, we make no apology for the title of this post.

As we enter 2011, the UK will adopt new terminology for TB breakdowns, courtesy of our paymasters in the European Union (who coughed up 27 million euros last year to help test and slaughter more cattle.) It all sounds fairly innocuous, but the implications are far from that.

Back in early December, some English cattle farmers would have received a missive from Animal Health explaining that 'in Wales', things were changing. And?
As we are not in Wales at blogger HQ, we shredded it. Nothing has been sent to English farmers yet, but Farmers Guardian has details of the changes.

The main difference is not terminology at all, but the implications of a confirmed breakdown on future problems in a herd and more importantly on any breakdowns in the herds of 'contiguous' neighbours.

Herds not under TB restriction will be known as OTF or Officially TB free. If a breakdown occurs which cannot be confirmed by either lesions or culture, then that status is suspended (OTFS) but if TB is confirmed then status becomes withdrawn (OTFW).

In England and Wales, to regain OTF status herds designated as OTFS will require one clear short interval test and this was the testing situation prior to Jan 1st 2011.
But from now on things change:

However, if either of the following circumstances applies, two consecutive tests will generally be needed:

* The herd has had OTFW status in the three years prior to the current breakdown, or;

* The herd is contiguous to another which currently has OTFW status. This will not however be changed retrospectively if contiguous herds subsequently have their OTF status withdrawn

And it is those changes, but particularly the latter, which will have a far greater impact on testing regimes than has been realised. Like a ripple in a pond, any neighbour of a herd which has had TB confirmed and status withdrawn, will adopt that status (or the testing regime that accompanies it) if there is a breakdown in his herd - regardless of post mortem results. And that could involve several farms in a 'ripple' generated from a confirmed outbreak.

Meanwhile, Animal Health have just retrieved short interval TB testing from LVI vets, with herds between 100 and 250 animals having the benefit of a Defra vet to test cattle. Just how they are going to cope with Treasury budget cuts, extra paperwork and now extra short interval testing this will generate, is up for discussion.

Meanwhile we have a feeling of deja vu as this year begins.

In the 5 years since Defra's last 'consultation' on whether or not to remove badgers infected with tuberculosis, 250,000 cattle have been shot, not a single TB riddled badger apprehended but the industry face another raft of new cattle restrictions.

Update:
We are hearing from LVI vets up and down the country, that many have been hauled back into short interval TB testing due to injuries sustained by AHO desk jockeys. Some of these people are good with cattle, but many may be more used to handling a computer mouse, than a ton of angry cow.

And this change in TB 'terminology' - which is not that at all - is still generating much discussion as to how it may be implemented in practise. Will it be 'contiguous' as in neighbouring holdings on a parish map? Or 'contiguous' areas where cattle have grazed, and when they grazed? We understand that this is still very much work in progress. And we think this could generate quite a discussion at the coal face, as to exactly what herd restrictions may follow a new breakdown.

And English farmers have still to receive formal notification from Defra, of any changes to its policy at all.
Posted by Matthew at 8:42 AM 13 comments: