We have spoken many times of the inevitable overspill of 'bovine' TB from its tested, slaughtered sentinels into any other mammal which happens to cross its path.

We have given mileage and support to the owners of alpacas, reeling as their animals die from a dangerous zoonosis which many of them had never associated with their particular group. So seriously do they take the risk to their animals, that they have set up this new website (on the link and the sidebar) to inform and support owners.

However, we still get the age old comment it's "bovine" TB - so it's carried by cattle, spread by cattle and only affects cattle. The posting below, a gem of a comment from the Viva! organisation actually states just that. Stop cattle farming everything will be fine. Except that the environmental contamination from the primary wildlife host of m.bovis, has already affected several other species, and continues to do so. 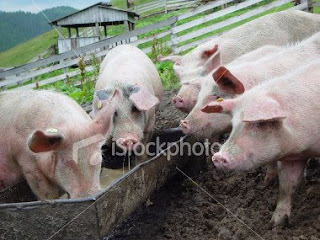 Last week, we were alerted to a new leaflet issued by BPEX, the pig industry support body. This describes bTB as in pigs as 'a spillover' problem, as opposed to maintenance host of the disease:

"bTB is a mycobacterial disease and its ability to infect many species, makes it a very problematic disease. As well as cattle, some of the species bTB can infect include camelids, horses, badgers, cats, sheep, humans, wild boar, pigs and deer. Pigs are classed as a spill-over host. This means when levels of bTB circulating among wildlife and cattle in the local environment become very high, it literally spills over into other species, which are not usually infected with bTB. This situation is most likely to occur in bTB hot spots such as the South West and the Midlands but it is essential that all producers are vigilant due to ‘off-site’ and contract growing and finishing, and also pigs being moved between regions for finishing.

To produce such a bulletin, which is fairly long and detailed, and to combine its launch with area meetings, one would assume that the numbers of pigs found with TB at slaughter are likely to be significantly more than the 13 shown on Defra's 'other species' TB statistics show? These figures relate to positive cultures only, and then only one or two of the beginning of an outbreak, and are many months out of date. But a BPEX a spokes-person has confirmed a figure of 40 pigs (in the last eighteen months)to Farmers Guardian, who have the story.

National Pig Association regions manager Zoe Davies said, while the increase might be partially down to an increase in reporting, it is also being driven by high levels of infection in the environment, with pigs picking it up from badgers.

No cattle mentioned then? No unpasteurised milk? At least someone has their brain cells in gear. Dr. Davies continued on the subject of free range, outdoor pigs:

Dr Davies said free range units were particularly susceptible. Owners of rare breed and pedigree pigs tended to be worse hit as these animals were generally kept for longer than commercial pigs.

The NPA and BPEX have put together an advice leaflet [link above] on how to minimise the risk of infection that has been distributed to most major pig keepers in the country.

Along with the British Pig Association they have also met with Defra’s TB policy team to seek to develop a proper policy to deal with the problem.

“Our big issue is that Defra don’t have a policy for how to deal with TB in pigs. It is vaguely based on what they have for cattle, which doesn’t really work [for pigs]." she said.

We have been told of pig TB cases in closed indoor units, carried in on badger-contaminated feed and also the more worrying instances of very rare breed pigs, particularly at risk in a hotspot area. More TB casualties are inevitable, as the scale of bacterial contamination in the environment rises. There will come a time when Tuberculosis infection in all these animals (and their in-contact owners ) cannot be excused by visits to foreign shores, or drinking unpasteurised milk.
Posted by Matthew at 8:08 AM No comments:

'We should stop farming cattle'

.. and then 'bovine' TB would disappear. So says a grammatically challenged, totally naive but absolutely priceless rant from a long term opponent of livestock farming, Viva!
The missive airily dismisses the badgers' role in transmission, pointing out that:

" ... other species will transport Tb to neighbouring herds of animals. These species may not necessarily be badgers. Minks, Deers, Foxes, Moles, Rats and Ferrets are examples of other species of wildlife that have been positively tested for bovine Tb."

"Minks" and "deers"? Sheesh. But we digress. Smaller species may contract m.bovis, as any mammal can. The important difference between them and badgers is the progression of disease (does it kill them quickly?) and the amount of bacteria they are able to share shed in that time. In badgers, the answer to the former is no, they are able to live for years while intermittently shedding the bacteria which causes bTB. But the amount shed, both in the confines of a badger sett, and plastered over grassland, corn/root/vegetable crops and cattle feed, is phenomenal, thus they are the most successful 'host' species of bTB in this country. The writer continues:

It is important to bear in mind that the main vector for bovine Tb are found in cattle, not badgers – hence the name bovine Tb ! If it weren’t for the farming of cattle, bovine Tb wouldn’t exist and other animals wouldn’t suffer – including wildlife.

Unfortunately this type of simplistic claptrap is spouted all too frequently, and is gobbled up by the young (and the not-so-young) idealists who do not so much 'lurve' badgers - as hate farmers. And especially livestock farmers.

But studiously ignoring the continuing and growing overspill into other group mammals, some of which we reported here and here, and the many
companion animals does not make it disappear. Despite the position being reinforced by Defra's strangely dumbed down accounting system for such 'other species' TB casualties, which only counts positive culture samples submitted to VLA - and nothing else. Of these, there may be only a single one to log in, but many deaths in a continuing tested or untested, outbreak. (We note with not a little amusement, that the table of exclusions from these statistics, is now longer than the table itself.)

The Viva! piece predictably refers to 'the science'. The ten year farce 'trial' between 1997 and 2006, which blots out all other 'science' from 1895 onwards; and from 2008 to the present day. This 'political' science which appears to have the added benefit of numbing the power of common sense in its groupies, and which Canute like, continues to haunt this country.

However, the Viva! spokes-person has the answer:

Therefore the answer is quite clear. If the objective really is to prevent the spreading of bovine Tb for future generations of humans and animals, we should stop farming cattle.

We have added a new link ( on the left hand bar) to a site dedicated to TB in alpacas.
From the press release:
"Dianne Summers, Dr Gina Bromage MA,Vet MB,DVM,MRVCS, and recently resigned B.A.S. Chair Mike Birch have developed a new website dedicated to the subject of bTB in Camelids.

The purpose of the website is two-fold – first and foremost is to help camelid herds who come down to Tb and secondly to educate camelid owners on the serious issue of bTB with the hope it will reduce the risk of it happening to them." 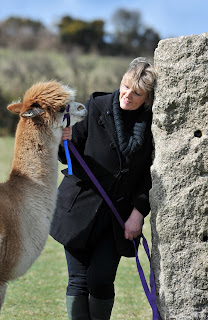 The pic is Dianne Summers with one of her alpacas. Dianne explains:

And for anyone still hooked on a badgers v. cattle polemic, and thinking b.tuberculosis doesn't affect them - please click on this link.
Should any pig, goat, sheep or any other groups decide to create their own support network we will be pleased to offer a similar link.
Posted by Matthew at 12:00 PM 8 comments:

Just as the Con-Dem coalition launch their 'consultation' document on possible ways out of the mire of their own making - bTB , further mileage is provided by farmers co-operative Mole Valley Farmers, who have sponsered distribution of Chris Chapman's beautifully made, sensitive film about bTB.

We spoke of this almost a year ago. In the October edition of Mole Valley's magazine a download of the film is available. Or a telephone contact number for a free copy of the DVD. This is available both to members or non members of the co operative.

The cost of 25 years of fluff.

The progressive sanitisation of TB policy by successive governments of both colours, which we described here combined with a £ multi billion (or is it trillion?) bale out to bankers, GB plc is broke. The cupboard is bare and the thought of stumping up more cash for continually testing and killing cattle, and now alpacas, sheep, goats and pigs is finally being questioned.
That's 'questioned' as in putting veterinary TB testing out to tender, and bringing more herds under former-desk-jockey AHO control. And 'questioned' as in shafting the ultimate cost of dealing with the problem in wildlife to farmers.

The Consultation Document produced by Defra, is high on rhetoric but lean on exactly what farmers will be expected to cough up and for what. But having explained in the Final Report of the ISG that culling badgers 'in the way it was done in the RBCT' was expensive and inefficient, a very similar scenario is proposed for a farmer controlled cull. Only this time, it will be the owners of cattle, alpacas, sheep, goats and outdoor pigs, who pick up the tab and not the taxpayer.

Farmers Guardian has the breakdown and further explanations can be found in the quaintly entitled Annex F - Impact Assessment, where farmers may have missed the mention of the £1.6 million they are expected to stump up for each 150 sq km, controlled under Defra's favoured Option 6.

That figure is made up with £.7 million for cage trapping and free shooting about half the badgers in 150 sq km patch.(70% of badgers in 75% of the land area) Numbers offered by Defra to support these cost estimates are less than 2 badgers culled per 1 sq/km. Further costs include surveying regularly and the use of fragmenting shot at £4 per bullet. Disposal will be at least £20 per carcase.
£.9 million is added to that for the vaccination in option 6, which Defra want to run parallel with any cull, both inside the area and on any exposed boundary.

This document does have one redeeming point. It categorically states that:

Badgers are known to harbour bTB and without addressing TB in badgers, it will not be possible to eliminate the disease in cattle.

And with that, our new Minister of State for the Department of Food, Environment and Rural Affairs the Right Honourable Caroline Spelmanperson, MP, becomes the only Minister in the world,( of whom we are aware ), to throw control of the zoonotic disease known as 'bovine' Tuberculosis back to farmers, with her department and her employees taking no active part whatsoever, other than monitoring cattle breakdowns.

For this reason, (and several others, not least a potential block vote by the RSPCA and the Badger Trust) we think it is important that everyone directly involved with this: cattle farmers, owners of other herd or flock mammals, owners of dogs and cats, many of which have succumbed to 'badger' TB, veterinarians and supporters of healthy British wildlife reply to this consultation paper in a sensible and coherent manner.

More on the reasons to complete this Consultation, from NFU president, Peter Kendall.