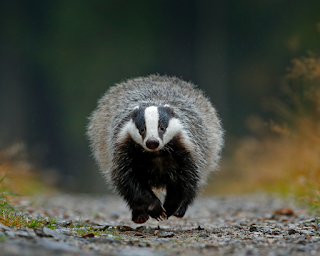 Published this week, a study on the movement patterns - [link] of badgers, conducted over seven years in Ireland.

Entitled 'Dispersal patterns in a medium‐density Irish badger population: Implications for understanding the dynamics of tuberculosis transmission' the paper gives an insight into population dynamics of groups of badgers and more importantly, how far they 'disperse' from home territory.


For example, one female disperser which eventually settled 1.5 km from her natal territory traveled 308 km and passed through 22 different territories during dispersal.

Now it isn't rocket science to conclude from all that is known of badger behaviour that within a finite area, with a finite food supply and unlimited population increase, something is going to have to give.

And old, sick individuals or young males are turfed out from the group to fend for themselves. The paper describes one collared female (F11) as having sustained bite wounds on her travels.

The implications for disease transmission are explained thus:


Our results illustrate that a single individual disperser may interact with over 20 social groups, often sleeping in their territory, providing abundant opportunities for disease transmission. Individuals such as this, who have extensive contact with other individuals, will affect the way in which disease is transmitted through a population, and particularly, a population structured into social groups.

As cattle farmers, what we picked up from this, and a quick scroll through a few of the 130 references given (yes that is correct - over 100 previous research papers are named) is that badger social groups are not stable, and when individuals leave the group - for whatever reason - they travel a lot further than was thought.

Up to 308 km (190 miles) for one collared individual, passing through (and fighting with) 22 other groups on its travels.

However, given the beneficial opportunity to trouser loads more 'research' cash, scientists have not yet homed in on the obvious solution to diseased wildlife roaming far and wide.

This paper discusses vaccinating prior to 'dispersal', but the simplest solutions are often the best.

Identify infected groups and euthanase all members? And then manage populations so that numbers do not stress out disease ridden 'dispersers' to shed and share the disease which is endemic in them?

Sadly, both farmer and veterinary knowledge is  still  bypassed - [link] as the gravy train rolls on.