... and definitely don't follow one. This cartoon reflects the position of our industry in 2016. 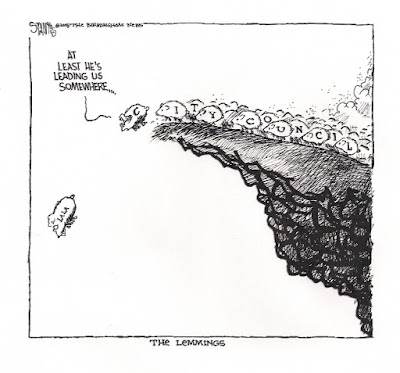 If we do not learn from history, then sadly for our cattle, our industry and the emotional and financial health of our livestock farmers, we are condemned to repeat it.

Over the last twenty years we have listened in disbelief and increasing anger, to the prattling of those inhabiting their setts in the Westminster bubble, hell bent on finding that huge hidden reservoir of cattle TB which is driving the epidemic in this country, while ignoring the blindingly obvious.

Having trousered £1m in 1997, they employed one of the most 'political' scientists - [link] on the planet to prevaricate for another decade. And have wrapped the UK's primary wildlife reservoir of zoonotic Tuberculosis up in its grade 1 listed Ancestral home with ultimate protection. So, as they busily skip towards their protected pensions,  what can we remind them of as another new year breaks?

Here's a few points for starters.
We are hearing some alarming 'factoids' about the universally applied intradermal skin test. But apparently only applicable in certain areas of England, Wales and Ireland it seems. In the rest of the world, it works just fine. Now if this internationally used skin test was missing X per cent of infected cattle in parts of Great Britain (take your pick on what figure is doing the rounds) but let's settle on 20 per cent, then eventually, all these disease riddled animals would end up in abattoirs. That's what happens. And they would go down the line past a Meat Hygiene operative, trained to look for evidence of - tuberculosis.
So how many do they find? Defra reported in 2014:


Between 2009 and 2013, over 11.1 million cattle were recorded as slaughtered in 313 slaughterhouses in GB. During this period 7,370 samples with lesions suspicious of bTB were submitted to AHVLA by meat inspection teams of the Food Standards Agency (FSA) leading to an overall rate of 0.66 submissions per 1,000 animals slaughtered.

And don't mention the Isle of Man - [link] a lump of rock in the Irish sea, from which you can see if not touch, parts of Ireland, Wales and England: enjoying the same weather, geology, cattle husbandry and testing. But no TB and no badgers. Maybe it is the TT races? But then correlation is not causation, is it?

So as more severe cattle measures rain down on herds unfortunate to live in the areas of England frequented by endemically infected badgers, will they work? Will testing all breakdown herds twice under severe interpretation, using more GammaIFN (with a specificity of around 65 per cent) and very little movements except direct to an abattoir, work?

So a message to all you bright young things, who think this is a new idea, it is not. -[link] It was done with bells on in Cornwall in the 1970s by a DVM called William Tait who operated  fierce and brutal cattle carnage. And repeated from 1988 - 1992 by Liam Downie - [link] in the Republic of Ireland.

Predictably, the results of both were a futile and expensive embarrassment. Except that our lot seem hell bent on repeating them. Why?

Which brings us around to the latest guff to hit the cattle industry. The Berlin wall which Defra have erected around the best piece of pure science to be available to us for a long while.
A screening test to find infected badgers - [link] something which we have always been assured wouldn't happen.

But having accepted this validated test in 2011, repeated it to find its best operational protocol in 2014, Defra then proceeded to ignore that protocol in a blinded trial commissioned in 2015.
And still one test passed 4 out of 5 strict criteria with flying colours, when offered genuinely positive (spiked) samples. So what was left? Professor Wellington's PCR test was said to be 'borderline' on group specificity.

And would thus leave a possible heap of falsely accused, but very dead badgers.

We could remind readers that gammaIFN has a specificity around 65 per cent when used on cattle, leading to many  false positives, but let that pass.

The blinded trial used single samples, so how did they arrive at a group figure? We suspect that they 'modeled' it back from a single sample / badger. But PCR is not a test which can be 'modeled'. It is DNA.

Think paternity tests and Forensic Science. No interpretation, just a yes or a no - but not the milkman.

Now being the cynical lot that we are at blogger headquarters, we see this as an evasion of responsibility.

Because if a Grade 3 zoonotic pathogen is found, then the responsibility for its removal and eradication is not that of farmers, running around the countryside within a mythical boundary, trying to shoot 70 per cent of the possible carriers. That responsibility is Defra's, and must be operated under strict bio hazard conditions.

And that is a responsibility they would rather not accept.

Our co-editor has succinctly offered a quote by Upton Sinclair which fits the bill quite neatly;


"It is difficult to get a man to understand something, when his salary depends upon him not understanding it."

Posted by Matthew at 8:40 PM No comments:

On January 12th 2016, Defra applied to the European Union for TB free status for the Isle of Man.

Apart from hosting races where motor bikes take over the island for a few days, the Isle of Man has many similarities with its geographic neighbours.
Sitting half way between Ireland and North Wales, with an amazing view of both those regions and Scotland, the island shares the same weather, geological features, cattle husbandry, cattle breeds, husbandry and veterinary TB testing regime. But there the similarity ends. 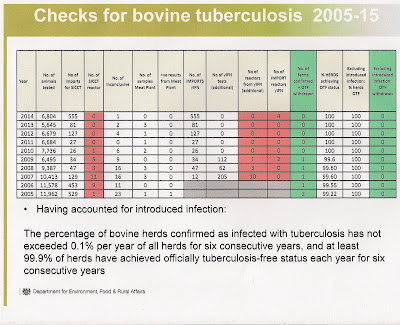 The Badger Trust have used the Isle of Man to make mischief before - [link] as we described in 2007.
In 2012, they announced that the Isle of Man was 'rife with TB'. Nothing has changed. The chart taken from the application, tells a different story.

Animals imported into the island are post movement tested, and any breakdown not associated with a bought in animals, is dealt with swiftly by action on wildlife in the location. In this case, feral ferrets, polecats and wallabies. This was statement from the Isle of Man authorities, given to us in 2007:


"We can clear up our outbreaks without further breakdown because we don’t have a large reservoir of infected badgers.


We think it may be circulating to a minor extent outside cattle and are looking for a wildlife reservoir – suspects at the moment are feral wallabies, feral cats, polecats and rats. If and when we find proof of an infected wildlife reservoir, we will take action to control/eradicate.


If any badgers were to be imported and released illegally, we would take immediate steps to eradicate on the grounds that they are non-indigenous species and a threat to our national herd.

So while we in England and Wales prattle on about vaccinating badgers (and in Brian May's case, cattle) while vets and breed societies take their collective eye off the ball by producing genetic indices, and our Ministry ducks out of its collective responsibility for eradication of zTB in wildlife, by using the same basic tools of test and slaughter, the Isle of Man has succeeded in becoming TB free. The difference is that they also eradicate TB from their wildlife.

We are reminded that annually, in order to receive the lion's share of the EU's TB budget, this country has to submit an eradication plan. And more importantly, the results of previous largesse. We reported the 2014 presentation in this post - [link] together with a screen grab of the twee back page which accompanied it. 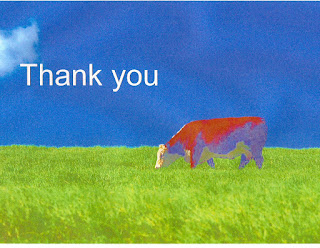 We also remarked that cattle domiciled in mainland Britain have nothing to thank our ministry for.
Nothing at all.

Posted by Matthew at 6:23 PM No comments:

For a couple of Devon farmers, the last few weeks have been anything but happy. A couple of weeks before Christmas, farmer Michael Ashton's lovely jersey herd - [link] was reduced by a quarter, after 45 cattle were revealed as reactors. The reports carried an extraordinary comment attributed to the NFU, that:


" ...a fox may have dragged a dead, infected badger across pasture land and passed on the disease."

Whaaaat? Why bring a bloody fox into the equation? A half dead badger crawling around can easily infect a herd of cattle with no help at all from anything else. He's a mobile WMD. (Weapon of Mass Destruction) 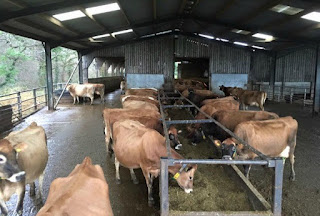 And the news this week is no better, with Crediton farmer, Malcolm Huxtable inviting Dr. Brian May to watch, as his cattle were condemned - [link] as reactors.

May's reaction was to once again push for cattle to vaccinated. That is the answer, he said, with all the confidence of the totally uninformed. And this posting, after his last foray into vaccination, explains why it won't work. Ever. [link]

And he forgets of course, the WHO's (World Health Organisation) rationing of BCG base vaccines to try and cover a 30 percent shortfall in supply. - [link]

He also chooses to ignore  the continuing upspill of badger TB into many mammals other than tested cattle, including domestic pets, their owners and vets. Or is Dr. May suggesting we vaccinate every mammal which may cross the path of a badger riddled with a Grade 3 zoonotic pathogen? And boost it annually, of course.

Come to think of it, what on earth are we doing even entertaining such obscure idealists?
The only people who should be dealing with the eradication of zoonotic Tuberculosis - where ever it is found - are Public Health, Defra and owners of animals which by International Statute have to be tested in an approved zTB eradication programme.

The opinions of anyone else, no matter how famous, are distractions. Fudge.

Posted by Matthew at 7:39 PM No comments: