Several items in the news this week. The first, picked up by the red tops, is the construction of an artificial badger sett - [link] in Lincolnshire, which, together with dyke repairs, is said to have cost £313,000. 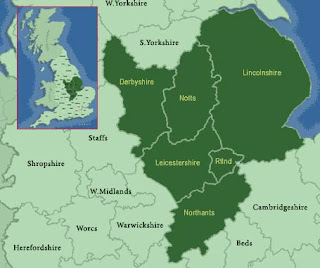 Sadly, it appears that the badgers didn't care for the decor, and began digging a few yards downstream of the new sett.

The agency is trying to combat a surge in badgers along the Steeping River near Wainfleet, which are eroding the land. But locals are shocked at the cost, which could buy a five-bedroom house in the area.


"There are a dozen other setts dug into the banks of the Steeping, so if each gets the same treatment it will cost £4 million. "It worries me dearly as a local county councillor that we've spent nearly £313,000.00 on this one badger set which is not guaranteed to solve the problem."

And not for the first time,  Councillor Pain explained:


I believe there were also costs up to £300,000.00 on the Burgh le Marsh bypass. We have serious issues in the Louth area with Badger sets affecting roads and in my own council ward issues to roads in Firsby has already cost roughly £15,000.00 and £10,000.00 on both occasions and the current issues at Toynton St Peters will cost another £40,000.00.


" The Environment Agency refused £800,000 plans to dredge the river, which has not been done in 35 years, in favour of the badger home."

Giles Trust, vice chairman of the local drainage board, said the animals have rejected the extravagant new home because it is too damp. Mr. Trust told a national newspaper:


"They have dug a new sett half a mile away — straight into the river bank."

So, along with acres of carrots, there appears to be a surplus of badgers in Lincolnshire, which is just one county and a very short hop, away from Defra's notorious and useless zTB Edge area. The area we call a Maginot line ( and about which APHA say very little) and which is bubbling up some nasty clusters of TB outbreaks in the east Midlands. Making so much of the Low Risk area of England, while abandoning any meaningful wildlife control in the High Risk area, was always going to be a risky strategy.

Combined with unfettered movement of badgers, either on foot or delivered to order - [link] and alpacas, the Edge area has been a movable feast since it was dreamt up.  And as it moves steadily east and north, carrying with it annual increases in zTB, a wild deer has given Defra a slight headache with their plans to get the Low Risk area TB free within the next two years. While abandoning the rest of us to ever more cattle controls, insults and bio-garbage advice. 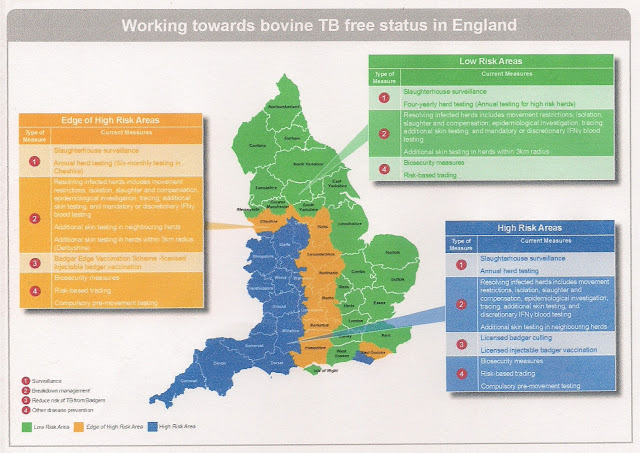 Just one county separates  the East Midlands Edge and the North Sea and now a dead roe deer, with zTB cultured as spoligotype 21 a (home range, Somerset / Avon) smack in the middle?

One laboratory-confirmed isolation of M. bovis in a wild roe deer, shot in College Wood near Wragby (estimated grid ref TF120756), by a XXXXXXXXXXXXXXX in March 2016.


Carcase presented VL in mesenteric LN only. Spoligotype 21:a, typical from Somerset/Avon.


[ snip ] This case is being investigated further, with no other evidence of indigenous reservoir of M. bovis infection in the local wildlife populations. Passive surveillance in the deer population has been strengthened through intensified liaison with local Forestry Commission and private Estates for increased awareness and reporting of suspect cases and improved collection of data.


Radial testing has not yet been instigated.


No voluntary badger BCG vaccination known to have taken place.

This roe deer was dispatched in March, and allowing 8 - 10 weeks for cultures, only now in areas near where it was shot, are farmers being contacted for radial testing. So APHA's assertions of  'no other evidence of m.bovis infection in local wildlife populations', maybe somewhat premature if they haven't looked. Or more likely, were in panic mode denial about this nasty red splodge, smack in the middle of a Low Risk area, which we are confidently told will go TB free in a couple of years.

The area concerned for radial testing is described by a farmer thus:


"The area it covers is quiet large. 7Km radius Mareham le Fen, 7Km radius of Langton by Wragby, 3Km radius 1 mile North of Woodhall Spa. The [ deer died] in March so it has taken them a long time to decide the course of action."

An early Christmas present indeed. And a wake up call.

Posted by Matthew at 4:32 PM No comments:

The latest chunk of zTB 'research' has been released by the ZSL (Zoological Society of London). Some of which can be viewed on this link - [link] That link deals with vaccination, and another leaked chunk deals with badgers visiting farm buildings. The direct link /to UCL is now unavailable, but we are grateful to Farming futures - [link] for posting the abstract. The project, part funded by Defra, was labelled SE3046, cost £1.4m and its aim is described thus:


Scientists’ poor understanding of the most important route(s) of interspecific M. bovis transmission compromises the control of cattle TB. Were it known how and where badgers transmit infection to cattle, specific management could be implemented to reduce transmission. Lacking such information, guidelines on keeping badgers and cattle apart are necessarily based on judgement rather than evidence of cost-effectiveness, potentially discouraging farmers from implementing effective methods, and perhaps wasting resources on ineffective techniques.

Scientists may have a 'poor understanding' of m.bovis transmission, but we would venture to suggest, with the greatest respect of course, that veterinary practitioners, pathologists and many farmers have ample knowledge, combined with decades of experience.

Some twenty farms volunteered their cattle to be collared, to see if badgers came within spitting distance - if you'll pardon the expression. Now that, when you think about it, would involve an awful lot of collars. And so it proved as a letter from one participant in this week's Farmers Weekly explained: 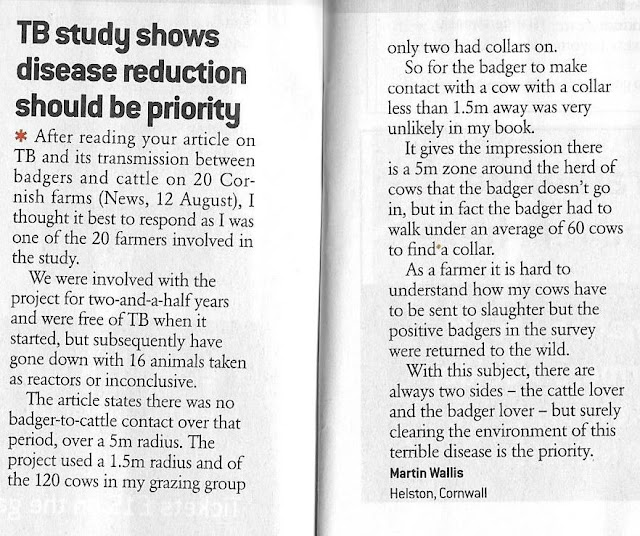 Not exactly what Mr. Wallis was expecting - two collars between 120 cattle?
And hardly the coverage described in the paper which was some 400 collars:  would they be virtual collars, and modeled? Who knows. Of  Mr. Wallis's 120 cattle, just two wore collars.

But the most galling to any cattle farmer, is his mention of the release of sick animals to up-cycle infection to any mammal crossing their paths.

He also mentioned the filming of these animals, playing with footballs.  Not sure how helps control a zoonotic grade 3 pathogen - but hey, it keeps the ball rolling. Mr. Wallis comments:

" They were very pro badger and had a line of students to do all sorts of surveys with the badgers including giving them footballs to play with. They are given government funding to research a project that has the conclusion all mapped out before it starts. This cartwheel of funding keeps them employed without sorting the problem or finding a permanent solution."


The LZS paper, also published as a letter to Veterinary Record was inevitably picked up by the BBC, - [link],  The Guardian - [link] and many other publications. But few mentioned that the contamination of that shared environment, was likely to be a continued source of infection to cattle herds under TB restriction, tested every 60 days, with reactors removed.

For that we have to rely of a veterinary and epidemiological view, offered in Vet. Record (Nov. 5th edition) by Stephen Davies BVetMed, MRCVS.

Mr Davies points out epidemiological facts (which we have reported on here - [link] and which our Parliamentary questions also confirmed)  that badgers infected with zoonotic tuberculosis are very adept at contaminating on a nightly basis, the environment in which they live. And that contamination is likely to remain long enough to infect cattle.

And Mr. Davies also points out that Woodroffe's paper reports a significant one liner, missed in the headlines:


".... transmission may typically occur through contamination of the two species' shared environment'.

This is concept many veterinary practitioners working in the field, have no problem with.
In fact as long ago as the early 1970s the results - [link] of the late William Tait's cattle carnage through west Cornwall, were mentioned in the annual report of the CVO.
Six monthly testing, severe interpretation of tests - all now coming to the High Risk Area, according to Defra's latest 'consultation' paper - and a total waste of time and taxpayer's money. The only thing the reports show, which reduced TB incidence in cattle in the 1970s was a clearance of badgers.


I have long advised farmers that if they are feeding concentrates to cattle at pasture, they should at least turn troughs over afterwards, to prevent badgers licking in the troughs for any leftovers. I also advise that salt licks and mineral licks (especially molassed formulations) should never be placed on the ground. An infected badger licking the surface, potentially leaves a dose of bacteria for the first bovine to ingest afterwards. 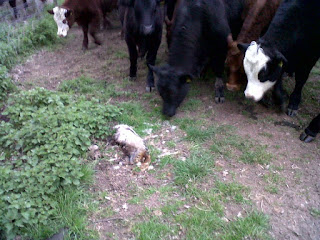 And the impact of dead or dying badgers on environment shared with curious cows is graphically illustrated by Adam Quinney.
He points out that after that picture of his heifers investigating that dying badger was taken, these cattle suffered a breakdown.

Stephen Davies finishes his letter with a word of support for practising veterinary surgeons and farmers, and a plea that their knowledge of experience of this disease (zoonotic Tuberculosis) which has been built up over many years, "and yet seems to be ignored or dismissed by policymakers."

By ignoring this pool of veterinary knowledge, Mr. Davies feels one tool has been left out of the box.

And we would add that by ignoring the epidemiology of the last 40 years concerning infectivity of both badgers and cattle, relying on mathematical models - [link] fed a raft of assumed data, coupled with incredible naivety of the 'scientist' of the day, this country faces the real possibility of further trade bans. And many, many more dead cattle.

The Parliamentary Questions tabled a decade ago, were unequivocal in their answers and this is arguably the most important one.
We asked what was the reason the Thornbury badger clearance had kept that area's cattle clear of TB for over a decade.

The answer needs to be inscribed over the door of every building occupied by this most political of government departments.:

As a postscript, we think that the area of the twenty farms (including that of Mr.Wallis and his two collared cows) may be subject to 'environmental screening' - [link] which could involve Warwick's qPCR, - amongst other things - in its £930,000 grant. How very odd then  that Defra reject out of hand this method of non invasive screening for badgers, and yet rely on its results for other species? But as Upton Sinclair remarked:


"It is difficult to get a man to understand something, when his salary depends on his not understanding it.”


We are grateful to both Mr. Wallis and Mr. Davies for their permission to use their letters and comments.
Posted by Matthew at 6:54 PM No comments: