This week a couple of complementary pieces have emerged from the mainstream media. No doubt a lot of 'twittering' will be caused but nevertheless, it's encouraging to see a spade being called, err, a spade.

The first is a two page spread in the Mail on Sunday - [link] with a strap line describing badger vaccination as a 'catastrophic failure'.


The Mail on Sunday can reveal that in key vaccination trials, the number of infected cows has not reduced at all but has in fact risen dramatically. Yet new Defra figures show that in the 12 months to the end of July 2016 the number of cattle culled in Wales as a result of TB was 7,380, an increase of 25 per cent on the same period to July 2015. West Wales is a bovine TB hot spot, but for the past four years badgers in the area have not been shot – they have instead been injected. It is a key experiment for the vaccination programme.

That is shocking, horrific and completely unacceptable. But the figures are incorrect. Defra statistics show that cattle slaughtered in Wales, during the year to July numbered 9492, an increase of 38 per cent, over the previous year's total of 6872. This despite vaccination of badgers, intensive action areas, annual testing and a whole load of biosecurity advice.

Indiscriminately vaccinating a group of animals of which up to 50 per cent are likely to be already infected, is tantamount to madness. But fortunately, that particular bandwagon  exercise has ground to a halt as supplies of BCG are very limited - [link] and needed for human beings.

As is often the case with media pieces on this subject, some fairly wild, headline grabbing adjectives have snuck into the Mail's story: badgergeddon' being one of the least offensive. The point missed of course, is that our ministry and its henchmen have placed livestock farmers on the front line against this disease, couched as a 'population reduction', but sold to the gullible as a farmer v. badger war.
Defra have offered little help in the form of PR.And made no mention at all of the massive increase in population of badgers since ultimate protection was offered, or of the seriousness of the Grade 3 zoonotic pathogen  which is now endemic in them.

For that we must go to the second article, which comes from Pro Med, via The BBC website - [link] and tells the story of a vet, working in Africa who contracted 'zoonotic Tuberculosis' from the animals with which he worked.

His story has familiar echoes of misdiagnosis and inadequate treatment in the early stages of the disease, as UK doctors and clinicians struggle to bring their 50 year old text books up to speed.
'Unpasteurised milk', 'foreign travel' and 'drug shelters in inner cities ' are still top of the list of risks offered by Public Health England. As are drugs tailored to the treatment of  m.tuberculosis but not to m.bovis.

There is of course little or no mention of the endemically infected wildlife which successive governments have allowed free travel permits over our land and gardens.

And finally, from the BBC website, an X ray of the infected lung of  vet, Jonathon Cranston. 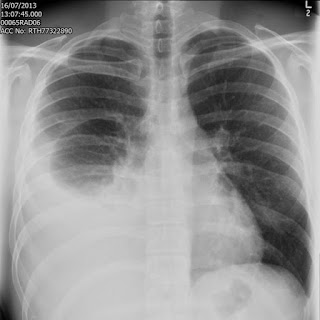 This is zoonotic or 'bovine' tuberculosis. And this is what it can do to a healthy young adult.

This country is playing Russian roulette, not only with our sentinel cattle, but with our population: offering them increasing chances of exposure to the biggest killer of human beings on the planet.

Posted by Matthew at 9:06 PM No comments:

Yet another consultation - link on whether they should test / kill more cattle is in Defra's melting pot, with a closing date of November 9th.

This one suggests gammaIfn to be used more widely in the High Risk Area, more severe interpretation situations and other niceties - all to do with cattle.

There is also a second document - [link] which calls for views on how to save Defra money, under the guise of a simplified testing regime. This document proposes to abandon trace testing, rationalise contiguous tests, extend 60 day Short Interval tests to 90 days, but test every herd every 6 months.

Now it may be stating the obvious, but during the last decade all this testing has produced sweet FA except an increasing pile of dead cattle. GB's reactor numbers are still nudging 40,000 per year and we are in serious danger of being a trade leper once again.

And, more importantly, as we have said so many times, synchronised cattle testing, brutal interpretations etc, etc, have been done before. In the 1970s by the late William Tait - [link] and repeated in Ireland in 1988, by Liam Downie - [link] And they failed. Because the reservoir of infection was not in cattle, but in badgers. And until that is treated with the respect it deserves, culling more cattle, more frequently will achieve nothing at all.

Already the NFU are challenging Defra, suggesting that one measure concerning Finishing Units has been imposed, without 'consultation'. They have yet to realise that the description is hollow. Defra have made up their minds what they would like to do, and will merely 'consult' before doing it anyway.

Nevertheless, the NFU overview is on this link.

This follows Defra's previous  tranche of carnage - [link] reported in April by Farmers Guardian, in a very readable format which includes those Finishing Unit restrictions.
Posted by Matthew at 8:05 PM No comments: