Merry Christmas to all our readers.


We wish you all a merry Christmas and a peaceful, prosperous New Year. And we hope that none of your plans are derailed by any small, black and white critters with a persistent cough and severe incontinence. 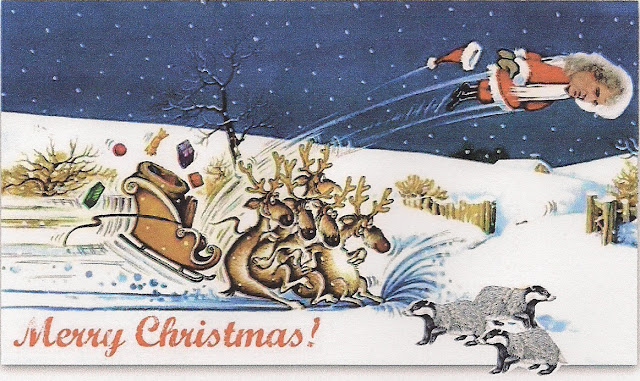 Posted by Matthew at 3:23 PM No comments:

The end of another year.

It's now 12 years since we posted most of the 538 Parliamentary questions, which formed the basis of this site in 2004. It is also over 100 years since Professor Koch did his experiments with m.bovis, and instigated the first postulates of disease transmission, which relied on a set of principles, rather than absolute proof.

In between then and now, this country had almost eradicated zTB from its cattle herds, only to see a resurgence in the mid 1980s from a wildlife reservoir it seems soooo reluctant to touch. And hasn't touched at all since a £1m bung to the Labour government in 1997.

Not unsurprisingly,  in the last couple of decades, main setts in England have increased by 103 per cent. How do we know? Because almost two years ago now, this article - [link] was published by Fera, which told us. Fera have also confirmed that in areas of endemic TB, about 50 per cent of the badgers are infected.

Apparently, we have a 25 year plan, but from where we stand, that seems long on cattle measures and short on anything to do with a wildlife reservoir of disease. But then, it's what Professor Bourne manipulated - [link] his team to deliver, almost 20 years ago. His idea was to let farmers knock off a few (a very few ) badgers to get them to accept cattle measures. Most of which, by next year, will be in place.

Meanwhile the Chinese whispers surrounding a DNA screening test for infected badgers get louder. Who has the megaphone we have yet to find out, but they are dead wrong. - [link]

Even when offered half the optimum number of samples, one tenth of the optimum number of bacteria and using a third of the background prevalence of disease, this test performed very well, meeting 4 out of 5 of Defra's criteria. The one on which it was 'borderline' was Specificity. That is the number of false positives any test gives;  which while not upsetting many people when it comes to tests used for cattle, appears to give Defra's mandarins indigestion when applied to badgers.

But how do they calculate DNA? Obviously the acronym PCR (Polymerase Chain Reaction) fuddles their collective brain, so we'll stick to Deoxyribonucleic Acid which is the long word for DNA. An acronym most people have heard of and trust.
Think paternity tests, forensic science, Silent Witness and TV murder mysteries.

And the only way a DNA sample (PCR is DNA fragments) can give a false positive is if the sample (or those playing with it?) is corrupt or contaminated. It's a straight 'Yes' or 'No'. But what you cannot do is 'model' it to give stupid results, if you want to trash the whole idea. Neither can you take specificity of one test on one badger and model it back to a group. Warwick's badger DNA test is a group test, relying on 20 samples taken from a group latrine - the one nearest the sett. And used as instructed and validated, it works.

So as this year draws to a close, what have we achieved? Just three small pilot cull areas with some dubious input data on existing herd breakdowns - [link] which are proving difficult to substantiate - one way or the other. Two of these pilots end next year, with nothing in place after that. Meanwhile, we have several mini cull areas awaiting Natural England's attention. They'll have to move quickly to catch up on Fera's 103 per cent increase in main sett populations.
And, we hear, possibly some mini T-Bags. Local discussion groups which are to feed 'information' - as yet unspecified - up to the big TBEAG and thus to government.Who can then file it.

Inevitably, we also have another raft of cattle measures to look forward to. Two tests at severe interpretation for any herd in the high risk area which has a breakdown, regardless of the cattle post mortem results. And a post movement test for cattle moving out of that area and not slaughtered within 120 days.

The one good thing which happened this year, is that the daft idea of vaccinating badgers - [link] has hit the buffers. But with cynicism born of years of practice, we expect some other inventive  prevarication to replace it - bio-garbage security being one possibility.

Meanwhile zoonotic Tuberculosis marches eastwards and north on four small paws, at a rate of knots. And there is nothing at all in the way of targeted wildlife management for these areas, only a nervous wait until they achieve High Risk status. And then they can try to comply with Natural England's mathematical carnage of a 70 percent cull on 90 per cent of land, in 6 short weeks. And pay for it..

Our grateful thanks to all our contributors around the world, and a very merry Christmas from us all at blogger headquarters.

Posted by Matthew at 8:31 PM No comments:

As the worldwide shortage of BCG vaccine for human beings hits the headlines, we hear that Wales has abandoned its trial of using the drug for badgers. Farmers guardian - [link] has the story of the Welsh Assembly Government's second U turn affecting the cattle farmers in this area.

Their first was to abandon plans for a cull of badgers, in favour of jabbing them.

There was no head count, no pre screening for existing health status and using a drug which had no efficacy data presented. Just trap and jab - as many as you can. And the cost? a staggering £2.8m in the first 3 years, and around 5,500 doses delivered in four years; with no certainty that they were given to the 'right' badger, or one who just put up with a needle in its bum, for the sake of a reward of peanuts.

We say this after hearing of a Devon badger which arrived on a local autopsy table, with numerous puncture wounds in its derriere. It appeared to have been 'vaccinated' numerous times.

Shortages of BCG first hit the headlines in 2012, when The Telegraph - [link] reported the closure of the plant operated by Canadian company, Sanofi Pasteur. This story was updated in 2014 by the Daily Mail - [link] which reported 'thousands of people' were left without the drug, which was now being used for bladder and bowel cancer.


Thousands of bladder cancer patients face an uncertain future because stocks of a drug that prevents the disease progressing are running perilously low.


The crisis means patients may be soon given a stark choice: surgical removal of the entire organ, or risk the cancer returning. Up to 12,000 people are to be left without the crucial medication, called BCG, as British hospitals run out of supplies.

And earlier this summer, the World Health Organisation (WHO) issued a rationing system for supplies of BCG. Their new recommendations are on this WHO paper [link] with their explanation for the rationing:

That is a 30 per cent shortfall.

Just one badger vaccination offered to a candidate of unknown health status and due to be repeated for at least 5 years - if the badger volunteered for his jab, is 10x the strength of a 'normal' dose for a adult human being and 20x that needed for a baby. 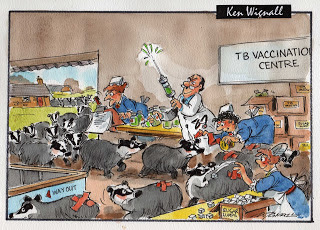 Excellent PR for the farming industry isn't it? Particularly as the drug itself, as predicted, seems to be having no effect on cattle TB in the area whatsoever.

But that was never the intention. What did Defra say in 2011? "Pump-prime farmers to accept the concept of vaccination"? We discussed it in this post - [link] And it gets no more palatable with re-reading it.

Patronising guff. And if Defra want to carry on vaccinating badgers, as one veterinary pathologist wryly commented, they could " use saline: it will have just the same effect".

* Grateful thanks to Ken Wignall for the use of his cartoon, first shown in Farmers Guardian.
Posted by Matthew at 6:00 PM No comments: