Flying under a flag of convenience?

This disease - zoonotic Tuberculosis - appears to attract the very worst in selective marketing.

From the notorious '74 per cent efficacy' - [link] attributed to BCG badger vaccine lobbed into an indiscriminately infected population, to the deliberate dumbing down - [ link] of statistics for 'other species' deaths from 'bovine' TB, we've seen many examples. 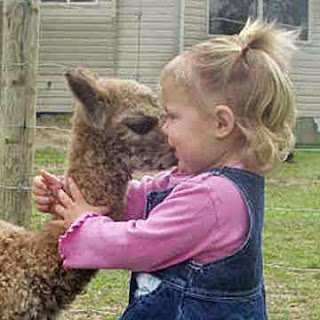 And it is to one of those 'other species' to which we return, with a very upbeat but totally misleading blurb about a a new blood test -[link] designed to seek out zTuberculosis in alpacas. And find it with 97 per cent accuaracy'.


"[] a single blood sample to be taken for testing from Camelids. The scheme also uses a statistical assessment to aid determination of herd infection status, pioneered by SureFarm’s Alastair Hayton. This has been approved by Defra.


The company said the scheme would enable herd level testing to confirm freedom from infection, testing of individual stock before movement or purchase and pre-export testing."

Sounds good? The National Beef Association magazine also covered the launch, which was attended by the NFU. The NBA splurge is expanded as follows:


"A £100,000K project, financed entirely by llama and alpaca owners in the UK has successfully developed a test, approved by government, which can prove at 97 per cent accuracy if an animal carries the disease [zTB] or not."


"It will give the owners of the UK's 30 - 40,000 llamas and alpacas peace of mind when exporting because it can demonstrate they are free of TB".

Well hallelujah to that. So what's wrong?

We would suggest a complete misunderstanding of the difference this test has exhibited in the trials between 'Sensitivity' - and 'Specificity'. The accuracy of any diagnostic test depends on a trade off between the two, and unfortunately, in the trials, Enferplex didn't fare too well as one of four assays trialled in terms of its ability to detect disease.

The full results are in charts prepared by AHVLA  on this link -[link] and although in one chart, the Speciticity of Enferplex is approaching 97 per cent, the Sensitivity or ability to detect to disease is only 66 percent. Meaning that 34 per cent of candidate animals, carrying zTB may be missed.

In the third chart, the sensitivity of Enferplex is very low at 55 per cent, meaning it may miss 45 per cent of infected animals.


The Specificity of a test is the proportion of truly uninfected animals that are correctly classified as test-negative. If a test has 99% specificity then 1% will be a false positive.


You can see that when used on their own, the Stat-Pak, IDEXX and Enferplex (2 antigen) have similar sensitivity and could miss around one third of infected camelids.


DPP and Enferplex 4 antigen could miss approaching half (45%) of infected animals."

More comment on this link - [link] and a button to direct readers to the actual paper.

Having looked at the tables, and in particular the Sensitivity or 'the ability to detect disease' in camelids, it would appear that IDEXX and STAT-PAK as a combined screen (after using a skin test primer)  give the best chance of not missing too many infected animals.

Conversely Enferplex, despite it's high profile launch, appears from these figures to be capable of missing anything from 33 - 45 percent of infected animals. As do the other blood assays as stand alone tests.

So one wonders - and not for the first time - what 'government' has to gain from its approval?

UPDATE: The following information is from AHVLA:


This ability of the skin test to boost specific antibody in camelids has been published in 3 separate research papers to date:

So sadly it would appear that Enferplex, particularly as promoted, i.e without mention of a priming tuberculin antigen skin test, follows several other blood assay screens for zTuberculosis into a black box of hope, rather than a useful tool for any zTB eradication programme.
Posted by Matthew at 9:18 PM No comments:

An epitaph to the demise of common sense.

From today's Sunday Telegraph - [link] a thoughtful piece from Owen Paterson, the former Secretary of State at Defra, whose 538 parliamentary questions on 'bovine' TB posed a decade ago, form the basis of this blog.


"I leave this post with great misgivings about the power and irresponsibility of – to coin a phrase – the Green Blob.

By this I mean the mutually supportive network of environmental pressure groups, renewable energy companies and some public officials who keep each other well supplied with lavish funds, scare stories and green tape.

This tangled triangle of unelected busybodies claims to have the interests of the planet and the countryside at heart, but it is increasingly clear that it is focusing on the wrong issues and doing real harm while profiting handsomely."

We described much the same situation, in this post - [link] and this one, earlier this year - [link] as Defra's various quangoes accompanied by Queen May's guitar, circled for the kill.

Thanks for trying Owen, we wish you well.

Sadly, the winner of this particular battle is not David Cameron, but zoonotic Tuberculosis. And in time, that pyrrhic 'victory' will affect us all. 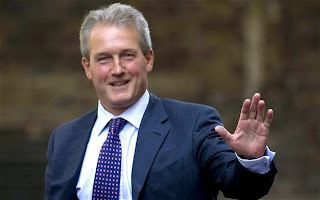 Photo from Sunday Telegraph article : origin AFP and The Farming Forum - [link]
Posted by Matthew at 7:54 PM No comments:

From Russia with love - the saga continues.

The saga of Russia's sabre rattling allegedly because of levels of TB in cattle, continued today as the Irish Independent - [link] reports a ban from Russia on imports of beef offal:


"Suspected traces of Tuberculosis (TB) prompted Russia to impose the highly damaging blanket ban on imports of beef offal from Ireland, the Irish Independent has learned.


The discovery of characteristics of the disease is understood to have alarmed Russian authorities who have cut off the supply of offal from Irish factories.


Officials from the Department of Agriculture are now involved in negotiations aimed at getting the ban lifted.


The sanction was imposed last month following a series of visits from Russian vets to 12 food processing facilities in Ireland."

This is not the first time that Russia has rattled Ireland's cage about high levels of the disease in its cattle population: in 2004 - [link] together with Poland and the UK, The Russian sabre was raised and threats issued. And so serious was this, that the European Commission drew up an inter-community Veterinary certificate - [link] which, if implemented, was another Beef Ban.
And just because that certificate has disappeared into the labyrinth of Defra's website archive, it doesn't mean it isn't lurking in a European drawer, just waiting to be signed. And we have it.

Other postings in 2004 described the process - [link] which led up to this situation, and the frantic diplomatic cartwheels -[link] executed to avoid it. Anything really, except control of the problem in the first place.

When we were reporting this in 2004, with around 5,200 herds under restriction during the reporting period, ( 5.6 percent of the 93,489 herds registered) the UK had half the levels of TB in its cattle, which we now enjoy. And still the mandarins were blissfully unaware of the possible cascade effect - [link] of a possible ban on UK beef products.

Roll forward ten long and, frustrating years and what have we achieved? The roll out of the new computer system (SAM) no longer gives the number of herds registered, together with the number of herds having TB problems, preferring to concentrate on new outbreaks - a substantially lower figure.

As the polemic deepens with an unhealthy concentration on cattle votes v. badger votes, and tuberculosis the disease is all but forgotten, just how long can GB keep shoving this particular problem under a diplomatic carpet?

Posted by Matthew at 6:27 PM No comments:

Figures can Lie and Liars can figure....

A swift response to the recent Cull the Cows - [link] computer generated guff, came on Thursday from farming Minister, George Eustice. Speaking at he Livestock Event, and interviewed for BBC's Farming Today - [link] programme, the Minister was pretty scathing about the modeler's efforts.

Co author, Dr. Ellen Brooks-Pollock of Cambridge University described how the team had entered data into their model of potential TB bacterial transmission of:

Which is pretty amazing when you realise that up to 52 per cent of badgers in areas of endemic zTuberculosis are carrying this disease. But we digress....

Dr. Brooks-Pollock went on to explain that her work centred around 'idealised control measures'. Not if you're a cow about going to be shot on the back of a University's half baked theory it isn't: that's not 'idealised' at all. It's terminal.

But George Eustice was having none of it. He pointed out that despite epidemiological evidence to the contrary, the model had ignored badgers completely, focusing on cattle and making many false assumptions. Including one that the disease dies out naturally in the environment in 34 days.
For the pedants, badgers can sustain this disease, maintain body weight, breed and rear cubs for up to 8 years. Reactor cattle are shot - which Dr. Brooks-Pollock had in fact noticed, pointing out that 90 per cent of 'infected farms' posed no risk whatsoever. Quite correct. They are locked down, facing daily [in some cases] visits from infected wildlife and tests every 60 days with anything reacting to such 'visits' slaughtered.

Mr. Eustice stressed that computer models were only as good as the assumptions entered into them, and if those assumptions were wrong (as in this case) then the results were flawed. He also pointed out that a team of experienced Defra vets, and the Chief Scientist - [link] were exposing these flaws and that although the aim of this model was laudable, its assumptions were wrong.

We can't take credit for the title of this posting: it appeared here - [link] with another succinct quote:


'correlation does not imply causation'.

Once again we can thank mathematical modelers for some hair raising conclusions - [link] obtained from the latest load of guff data entered, together with a generous sprinkling of mathematical symbols, into their new toy. The Guardian -[link] gleefully explores the story with the headline, Mass Cull of Cattle is required to control TB.

That sort of carnage was tried in 2001 for FMD, again using a rampant computer model if we remember correctly - but let that pass.

And we do not propose to remind readers of past efforts - [link] to control zTB with cattle controls alone. Or the effect on the incidence cattle disease if the maintenance reservoir -[link] of disease is removed. Or even the amount of bacterial contamination a single badger - [link] can generate, and how little of that 'contamination' is required to provoke a skin test reaction in cattle.

Having relied so much on the 'rough assumptions' contained in models developed by the ISG, we won't remind the authors of this work -[link] which cost an eye watering £2.8 million, but failed to get any samples from salami sliced reactor cattle to provide evidence of onwards transmission of zTB.

And we will we do no more with this paper than point to this paragraph which describes its data input - or lack of it.


The role of badgers in the maintenance and spread of bovine TB is a matter of considerable scientific, political and public interest5, 25, 26. Owing to the absence of necessary spatial and population level data on badgers, our model does not explicitly include their role in transmission. The environmental reservoirs play a comparable function, although the contribution of reservoir species and contaminated pasture cannot be separated. The environment is essential in maintaining local infection and may be implicated in up to 80% of all herd breakdowns (Fig. 2b, green hashed area).

We have no computer model set up to ignore badgers, so we will stick to the basics.  Not of mathematical models, but epidemiology and disease control.

No disease control program in a target species can be successful if a maintenance reservoir in an interacting species is left to re infect. That is indisputable. Just as the self sustaining nature of zTB in the badger is indisputable. And ignoring it does not make it disappear.

Posted by Matthew at 9:09 PM No comments: