It has always puzzled us that Natural England - or whatever they call themselves this week - have control over the wildlife reservoir of zoonotic Tuberculosis in Great Britain. In almost every other country in the world it is 'Animal Health' or its equivalent, which is the Government department responsible for clearing up Grade 3 zoonotic pathogens in animals. Our department is concentrating one hundred per cent on cattle, as we explained in the previous posting.

We spoke of our concerns as long ago as 2011, when this quango published its guidance - [link] for the proposed pilot badger culls. Natural England are also on record, off the record, as saying that the cull protocols would be as difficult as they could possibly make them.

This luke warm response to eradication of zTB in Great Britain, we discussed here - [link]

So apart from celebrating Easter, calving cattle, TB testing cattle and generally minding our own businesses, some of our contributors have also been wading through Natural England's new offers of cash for the preservation of the farmed Environment. Or their idea of what a farmed environment should look like.

Previously these grants have been in the form of hedge and bank management, buffer strips and beetle banks. But the new Mid Tier syllabus for 2017 - [link] , given NE's status as cull master, contains a rather contradictory option we thought. An add on option for capital grants, contains the intriguing title 'FG 14 - Badger Gate - [link] and a description of the hoops through which to jump to get £135 for constructing such a device within an agreed plan, and up to £200 annually thereafter to maintain each one. 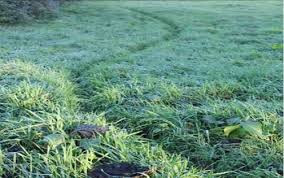 Badger tracks such as the one through grassland on the right, have to be studied, photographed and mapped. Then a specially designed gate flap installed in any new fence line, with no sharp edges on which they may hurt themselves.

Annual maintenance is carried out, together with detailed records of the event.


Sadly it cannot be used in an existing fence line, only in new fences supported by Countryside Stewardship, and curiously, not into areas where wetland birds nest. Which is strange as the published mantra is that badger's diets are made up of earthworms and grubs.

But a trail of peanuts and a trap the other side, could be a useful addition, could it not? And possibly take this element of 'contradiction' out of Natural England's role of badger guardian.

Following Consultations - [link] informing the cattle industry what it proposed to do, Defra introduced the first of its new proposals intended to kill more cattle, on All Fools Day 2017. We expect others will follow shortly.
As expected, more extreme cattle measures pile on to extra restrictions on licensed movements into already restricted herds. Inconclusive reactors in particular, come in for special attention. And the use of gamma Ifn, a blood test which offers broad spectrum sensitivity to many bacteria other than m.bovis, is to be more widespread in the High Risk Area, and in cull areas after their first two years.

Meanwhile incidence of zTuberculosis in the Edge area and the apparently Low risk area, increases.

Details can be found on the Defra operated Tb hub - [link]

Other than a few throw away mentions of 'bio-security' aimed at preventing cattle contact with infected badgers, we see no mention of any meaningful action on curbing the spread of zoonotic tuberculosis through this maintenance reservoir of disease whatsoever. This mind set of rubbish testing and a reservoir of disease in cattle, filters right down from the top end of Defra. And like their predecessors four decades, ago they are determined to stamp it out. But inevitably, as those predecessors found, - [link] unless the disease is eradicated in free ranging, over populated, super protected wildlife, an even bigger heap of dead cattle will make no difference to disease incidence at all.

But trust in and co operation with the Ministry responsible, already low, will disappear completely.

This current Defra mindset is also contradicted by scientists working for Defra. Following a conference in 2014, reported by author Richard Gard in Vet. Practice - [link] the following observations were made by Dr. Noel Smith, whose painstaking work compiling a zTB genotype database was discussed:


Today, the various genotypes have a specific home-range. Some 95% of bTB breakdowns are in the home-range or within 50km of it and 97% of genotypes have a home-range. Dr Smith indicated that the spoligotype identified from a bovine slaughtered for bTB indicates whether the animal has been transferred out of the M. bovis home-range.


“The observed geographical clustering of M. bovis genotypes is incompatible with a cattle-only transmission model for bTB in GB, or cattle-movement patterns. The geographical localisation of bTB home-range suggests a local, relatively static environmental (wildlife) reservoir of the bacterium”.

Perhaps Defra should talk to its own staff, or those of its more reliable agencies, more often.
Posted by Matthew at 8:34 AM No comments: