Wales - FUW reports a 37 per cent increase in TB in one year.

The Farmers Union of Wales (FUW) have issued a press release, urging the new Welsh Government to work with the farming industry to address the issue of TB in wildlife.

Speaking during the FUW’s Annual General Meeting, FUW President Glyn Roberts told members that an average of 36 cattle were culled every working day due to TB, representing an increase of 37 percent on the previous 12 month period, and an eight hundred percent rise since 1996.


“The pattern in the north Pembrokeshire Intensive Action Area, where millions have been spent on vaccinating badgers over the past four years, is no different”,Glyn Roberts told those present, referring to the latest scientific report into the impact of badger vaccination in the area, which found there was no improvement in TB rates in the area despite more than £3.7 million having been spent on vaccinating 5,192 badgers in the area since 2011.


We therefore look to this new government to finally grasp the nettle, and accept the basic facts which our Chief Vet has made clear to successive governments,” he said.

Glyn Roberts also highlighted the experience of other countries where cattle TB controls, which are less stringent than those applied in Wales, quickly eradicate the disease and restore TB-free status, citing the example of Germany. The badger population here is proactively managed, and numbers are reduced by around 65,000 a year.


“Their badger population [in Germany] is not endangered by any stretch of the imagination - and nor is it infected with TB.”

Glyn Roberts said such patterns are repeated around the world, and that scientific evidence gathered from across the EU and the globe showed that TB cannot be eradicated while the epidemic in wildlife is ignored.


“This truth, and the distressing figures in terms of the numbers of cattle being culled every day, is something we will be highlighting over the coming months, and we hope Welsh Government and those from across the political spectrum will work with us in helping educate the public about the severity of the situation, just as we have done in the past,” he added. 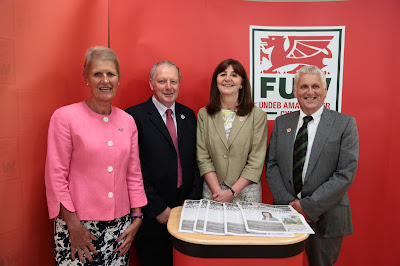 A (nother) new test for TB

Making the headlines this week, is another new screening test - [link] for zTB. This is a blood test, with results available in 6 hours, and aims to find TB bacteria circulating in blood, ahead of any lesions forming. 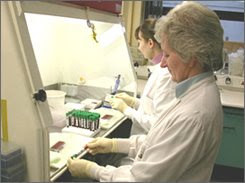 The test has been developed by a team at The University of Nottingham led by Dr Cath Rees, an expert in microbiology in the School of Biosciences and Dr Ben Swift from the School of Veterinary Medicine and Science.

The researchers have used this new method to show that cattle diagnosed with bovine tuberculosis (bTB) have detectable levels of the bacterium Mycobacterium bovis (M. bovis) - which causes this bTB - in their blood. The research: ‘Evidence of Mycobacterium tuberculosis complex bacteraemia in intradermal skin test positive cattle detected using phage-RPA' has been published online in the peer reviewed medical journal Virulence = [link]

The full paper is behind a paywall. More information is available from the authors.
Contact cath.rees@nottingham.ac.uk

In her introduction Dr Rees explains: “This test delivers results within 48 hours and the frequency in which viable mycobacteria were detected in the blood of skin test positive animals, changes the paradigm of this disease."


This new, simple and inexpensive blood test detects very low levels of mycobacteria in blood using a bacteriophage-based technique developed by The University of Nottingham. The group has patented an improved version of the method that delivers results in just six hours. More recently ‘proof of principal’ experiments have shown that this is even more sensitive. This is currently licenced to a spin out company, PBD Biotech Ltd.

This test uses amplified DNA, and is explained by the authors thus:

Any diagnostic test with a decent pedigree, is welcome, and having heard the guff circulating about the sensitivity of the internationally used skin test, many will latch on to these discoveries like the Holy Grail.
But tests such as this for cattle, would still be supplementary to the primary skin test. Just like Gamma ifn - [link] and Enferplex - [link] and even qPCR - [link]

But only a scientist on a mission could come up with the following two statements - and keep a straight face:


"Routine testing for Bovine TB uses the Single Intradermal Comparative Cervical Tuberculin (SICCT) skin test for M. bovis infection and all healthy cattle are regularly tested this way. However, it is known that this test is only 90 per cent sensitive at best and misses many infected animals."

and then in describing the test results:


"The data we are getting has taken the scientific community by surprise. In our paper we show that when blood samples from (45) skin test negative cattle were tested for M. bovis cells, all the samples proved negative."

Dr Rees then explains that the test showed:

So this test agreed 100 per cent with the 45 skin test negative animals and 'found' 66 per cent of the skin test positives? We're trying to get our collective heads around that one, but suggest the remaining skin test positives would be NVL at post mortem. That is, both the skin test and this blood screen, had, in some cattle, picked up mycobacterium bovis circulating ahead of lesions. Dr. Rees explains:


“More excitingly, using our new more sensitive six-hour method, this figure is even higher - all animals with visible lesions were MTC positive, and even 26 out of 28 animals where the lesions were not yet visible also were positive suggesting that M. bovis is commonly found in the circulating blood of infected animals. Using our bacteriophage-based test the hope is that we can help improve herd control by finding animals at the early stages of infection and helping farmers control outbreaks of bTB more rapidly. ”

The Nottingham team are working with the United States Department of Agriculture, Agricultural Research Service, National Animal Disease Center, to set up the first animal trial using the blood test to detect M. bovis in the blood of experimentally infected animals to determine exactly how soon this test can detect infection.

Dr Rees said: “The test also offers the potential for new, better tests for other farm animals. We are directly detecting the bacteria and so the method will work using blood samples from any animal species – so far we have detected mycobacteria in the blood of cattle, sheep and horses, but it could also be used for deer, goats or llamas. Not only that, we can detect any type of mycobacteria, we have use the same method to detect other diseases, such as Johne’s disease, not just bTB.”

Why only this suggested use on 'farm animals'? What about infected Badgers? Don't mention the 'B' word.

It could be useful. Just like non invasive qPCR on badger latrines and sputum could be useful. But it won't be used, as the responsibility for eradication of this Grade 3 zoonotic pathogen then becomes Defra's, not that of a farmer with a cage or a rifle trying to jump through Natural England's increasingly  convoluted hoops.

Finding cattle exposed to mycobacterium bovis, presently screened by the Intradermal skin test, and confirmed by this method is fine. As long as continuing  upspill from wildlife is then excluded. Otherwise, as now, we will shoot the messenger in ever increasing numbers, while gaining nothing at all.

Our take is that this test correlated very snugly with the results of the skin test, on the cattle which were examined. 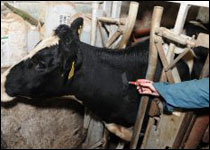 The paper is available to purchase on this link - [link]
For further information, please contact cath.rees@nottingham.ac.uk
Posted by Matthew at 10:10 AM No comments: