If there's one thing we've learned over the last two decades gathering information about the UK's epidemic of zTuberculosis, it is that salary and pensions are way ahead of any principles - scientific or otherwise.

We first came across this phenomenon with the diminutive professor, John Bourne. He headed the ISG (Independent Scientific Group, who were actually neither of those adjectives) and conducted the farce of the Randomised Badger Culling Trial (RBCT) 1997 - 2005. This was a debacle in which he was proud to explain to the EFRA committee that his trial's conclusion - [link] was predetermined before it started. Ker-ching.

Then we have Warwick University, happily trousering at least £1m to develop their qPCR test for use in non-invasive screening and identifying infectious badgers. Building on the validation in 2011, Liz Wellington's team - [link] were provided with a substantial sum of taxpayer's cash to bring this test into field use. Only to fly in the face of a farmer contributor, when asked to endorse the method for culling badgers. That, Warwick staff stated unequivocally, they would not do - [link]
We have yet to ascertain whether Warwick retain Intellectual Property Rights over a taxpayer funded test. But although they do not wish it used to identify infected badger groups, they seem very happy to play with it in the 'environment'. - Ker-ching.

And then there is the fragrant Rosie: Professor Bourne's sidekick on the RBCT, he taught her well.

Presently, together with a few political vets and Wellington's team, Rosie Woodroffe is playing around with a grossly infected group of badgers in West Cornwall.
Farmers involved are telling us that they wish they'd never agreed to let these people on to their farms. The drip feed of 'results' while making good copy, bear no relation to reality - [link] at farm level. Farmers who regularly lost just one of two cattle per test, now report lorry loads going, after Rosie's lot had cage trapped them.
But following TB infected badgers, the cash keeps rolling. Ker-ching. 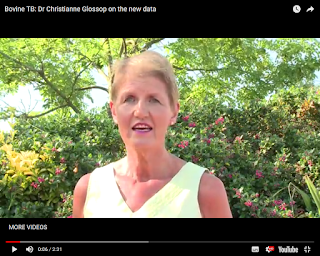 Wales too has its benficiaries of this crisis. In 2010, their chief veterinary officer, Christianne Glossop (picture above)  gave a stunning overview -[video link] of her plans to eradicate TB in Wales.
(Apologies - blogger didn't like the video link, so it's added as a URL link. Click to view)

What Glossop said in 2010 was spot on when she speaks of 'tackling all sources of infection' and that 'we must deal with infection in badgers'. And crucially, culling badgers 'makes a big difference to the level of infection in the countryside' and that 'directly reduces infection in cattle herds'. All correct.

But with a little arm twisting from an incoming Labour administration, seven years and heap of dead cattle later, Glossop now attempts to defend Wales's appalling record on eradicating TB without touching badgers. Record numbers of cattle slaughterings, the Welsh four year vaccination debacle, (much cash, but no effect on cattle TB at all) and the Intensive Action Area (where tried and failed cattle measures were repeated) leading to many cattle farmers giving up the struggle.
All this after the Welsh badger cull was cancelled.  Glossop is still in her position. Ker-ching.

As we have said many times, it is difficult to get someone to understand something, when his salary depends upon him not understanding. Ker-ching.
Posted by Matthew at 8:32 AM No comments: 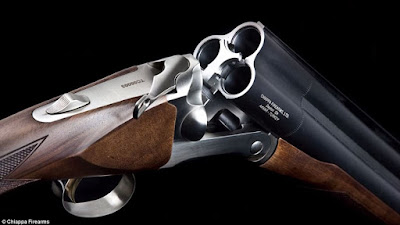 Operating for 42 nights, at a timing of the farmer led groups' choosing, the culls aim to reduce populations of badgers down to a level in which zoonotic tuberculosis (zTB) poses few problems to mammals these infected creatures (and the detritus they leave behind) encounter.

Aimed by instigators the NFU, more at winning a Judicial Review than a genuine attempt at disease control, these culls aim to control badger numbers. Thus very neatly passing the buck of  legal responsibility for control of a grade 3 pathogen. They operate using cage trapping and free shooting individual animals at night. That, rather than identifying infected social groups and culling the whole nocturnal social group underground in one hit during the day, which is now quite possible.

By the chosen cull method, any badger is encouraged to sup peanuts prior to being picked off one at a time. The background and government paperwork can be viewed here - [link]

Any benefit to local cattle (or sheep, goat, pig, alpaca or deer) populations will take longer by this method, as it did with the 8 night forays of the RBCT. But the results are said by the operators, if not by the statisticians, to be positive.

The statisticians, by playing with 'New breakdowns' instead of the more apt ' Herds under TB restriction ' appear to have juggled their input data - [link] to show - not a lot. But taken to its obvious conclusion, if ALL herds were under restriction at the beginning of a cull, but clear at the end, by this method of calculation there would be no benefit at all. And that's about as daft as it gets.

We are hearing of some very significant clearances of herd breakdowns, but if such herds were under TB2 at the beginning of their respective culls, that information would be ignored. Even two farms known to our contributors, which have been under restriction for some 17 years and after just one years' culling are now clear to trade.

But it's not all plain sailing. One superannuated star gazer, a pop star with a late degree in astrology, describes the culls as 'a tragedy and a disaster' - [link]
Dr. Brian May, believes that:


".... the real solution is in sight, through enhanced TB testing,”

“In years to come, I’m sure that badger culling will be seen as an enormous red herring that squandered time, effort and money, gave farmers frustration and false hope, and diverted attention away from finding the real solution.”

Perhaps when taking time out from his pop concerts, May should read a bit of history, rather than promoting its repetition. And to help him, there are several links in this posting - [link] which illustrate the futility of a one sided solution, to a problem which has at its heart, a wildlife reservoir of disease and a group of 'scientists' whose salaries and pensions depend on them not understanding that problem.

And then there are votes and / or subscription cash.
We have already encountered this road brock block from the National Trust - [link] and this week's Farmers Guardian reports a similar problem with East Cheshire County Council - [link] which has banned badger culling on any land directly controlled by the council. As tenants have to commit land for four years and more, that decision may also affect CC farms although at present, that scenario seems to be denied..

With an eye on voluntary contributions, the RSPCA have also taken up arms against culling badgers, while completely ignoring the endemic zoonotic disease which they host.

As readers will be aware, we have always promoted targeted badger culling, using state of the art technology to identify infected groups, based on tested cattle results.

But sadly the people who have trousered millions of pounds to get this test to the point of widespread use - [link] prefer not to use it for culling badgers.

So, in the next few months, a Dad's Army of farmers and contractors will pop off any badger which crosses their path, regardless of its health, and hope to lower the population level. And that's a bit like the vaccination supporters, led by the fragrant Rosie Woodroffe, who are doing exactly the same with BCG. Any badger will do, regardless of its health and how many times it rocks up for a peanut fest.

We suppose much time and effort could be saved if Rosie's lot trapped badgers and the farmers shot them. Job done.

Finally may we remind readers to fill in the latest consultation on more cattle measures, from Defra, links in the posting below.
Posted by Matthew at 12:10 PM No comments: