We have remarked before, that with TB non control, the more things appear to change, the more they remain the same. And so it seems with the introduction last August of a new farmer and veterinary package - [link] from APHA (Animal and Plant Health Agency) which includes a map of TB breakdowns surrounding the one to whom it was posted.

Introduced for new TB breakdowns in the High Risk and Edge area last August, this is far more detailed than the badger Activist's Road map - [link] produced a couple of years ago after a change in the Data Protection statutes. We showed it in the posting below, with an 'X' marks the spot on Mr. Durose's farm.
Today, Farmers Guardian - [link] have more on this story.

The building blocks of outbreaks in the area surrounding his farm over the last four years, were as shocking as they were indefensible. Mr. Durose's herd had been clear of TB and on annual testing for decades. 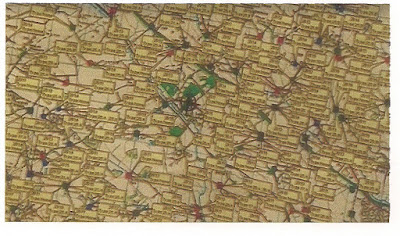 In the leaflet, the new mapping system is described thus:


d). TB breakdown map - included on the final page is a map showing the geographical location of the holding and geographical data that is held by RPA (i.e. an outline of owned and/or rented land that is registered against that CPH with RPA). [snip - explains helpfully, that short term grazing may not be included.]


This map also indicates the location of other recent breakdowns within the area surrounding the holding of interest, along with details of any genotype(s) isolated from them (if available). This information can give an indication of the incidence, weight of disease and identified M.bovis genotype(s) present within the localised area around the breakdown under consideration. This can help in considering the risk of locally acquired versus imported disease.

But how 'new' is this idea?

In 1972 a local vet at the Truro office began combining computer datasets with his curiosity into the origins of local TB outbreaks. All badger post mortems were logged, together with those from cattle as they became available. Spoligotypes and locations were painstakingly listed to show the depressingly familiar outwards spread we see today.

These maps are now part of a collection in the National Archive - [link]  who describe them thus:


I wonder how many farmers will be shocked to see how much ‘Big Brother’ knows about their activities?

and he also noted that:


We always used to ask questions to get this information. It occurs to me that they (Defra / APHA) must be very sure that their info is 100 per cent.


As we now live in a society thriving on litigation, we hope it is too.

Posted by Matthew at 8:29 AM No comments:

Four years on, and from the same area of the north Midlands comes another harrowing tale of carnage on our dairy farms.

This was the story we told then, of the 2013 'de-population' - [link] for Louis and Gillian Bothwell..

And the latest herd to feel the carnage of Defra's hammer are Guernsey cattle belonging to Mr. Durose who farmed  not a million miles from the Bothwells, and built a business producing A2 milk and cheese. - [link]

BBC Midlands Today has the story, on a short video which can be viewed here

Mr. Durose now has no milking cattle, no income and a wish list from our Ministry before he can be licensed to restock. Most of it dealing with keeping badgers out of the way of his stock.

By order of the Secretary of State. 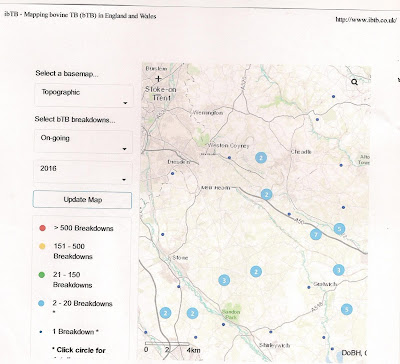 And this is a screen grab of the interactive TB map of the area around Mr. Durose's farm. more than 20 outbreaks surrounded his farm in 2016.


Below is a screen grab of the Defra map from the video clip.

Every yellow square  is a cattle farm which has been under restriction in the last four years.

His farm is surrounded. 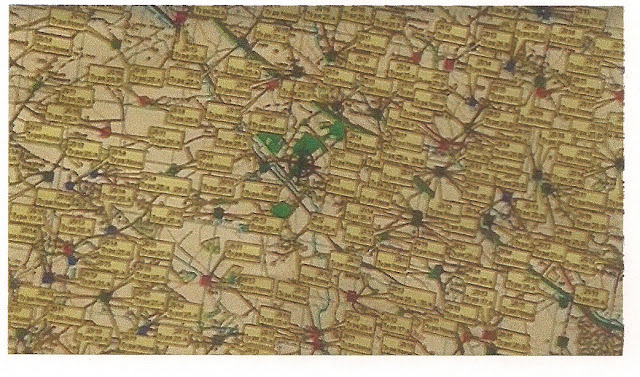 Twenty years of non-eradication of zoonotic tuberculosis from its wildlife maintenance reservoir has done really well, hasn't it?

Going to the dogs?

This week has seen another wake up call for the Ministry overseeing - or not - the eradication of zoonotic Tuberculosis, a Grade 3 pathogen affecting any mammal, from Great Britain. However, while Defra, APHA or whatever they call themselves today, continue to ignore the difference between a 'maintenance reservoir' of disease (badgers) and its spill over (other mammals), dead reactor cattle may build up, but the level of so called 'environmental' infection also increases.

We have mentioned many times the under reporting of zTB in alpacas, and our last posting - [link] seems to have woken up the British Alpaca Society, if not non-members of that particular clan.

This week the press has jumped on dogs as a 'carrier'. A pack of hounds belonging to the Kimblewick Hunt, and housed near Ayslebury - [link] have been badly infected with the disease, and as usual, media with large axes to grind are having a field day.
Leading the pack, is the Ecologist - [link] with a second swipe in that paper from the League Against Cruel Sports LACS - [link] written by Jordi Casamitjana who is Head of Policy and Research. Inevitably, the League  has decided that zTB is nothing to do with badgers at all, and it is hounds which are riddled with the disease, spreading it across our green and pleasant land.

The fact that the author is anti hunting has nothing to do with the slant of piece of course. And musing quietly here, if dogs (which, unlike cats, are pretty resilient to zTB) are to be put under the spotlight, what about footpaths, and dog walkers, often with multiple charges and some operating a business 'exercising' packs?

The story was apparently started by a group calling themselves Hounds Off - [link] and this piece is informative rather than over sensationalist. But most media outlets carry the paragraph below which we read with a degree of irony:


“The implications of this outbreak are huge. We already know that restricting the movement of animals in the countryside is the only effective way of controlling bTB .... []

Yup. We restrict cattle. Nail 'em to the floor, and shoot anything that has a sniff of mycobacterium bovis, while offering the maintenance reservoir of this disease the right to roam. Very sensible.

But we digress... This is a library picture from the Kimblewick hunt's website, on a happier occasion. 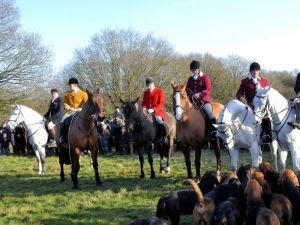 Meanwhile we too are interested in just how 25 - 40 hounds, depending on which website you look at, have contracted zTB. All at the same time. So we looked up the rules on 'passive surveillance' of the disease on the APHA website - [link] And it seems that any suspect lesions in fallen stock ending up in knackers' yards or hunt kennels must be notified to APHA - just as in abattoirs.

We also learned that only meat on the bone (flesh) from under thirty month old cattle should be fed to hounds, and any other bits of dubious provenance are stained and incinerated, with records kept of tag numbers, kg of waste and even ash from the incineration process.

So if the source of this sad outbreak, does turn out to be a break down in the fallen stock recovery, rather than any other source which can be established, the rules and regulations are already in place.

If however, the source remains unclear, then a moribund badger riddled with zTB has been the downfall of more than one canine investigator. - [link]

And then there was this case - [link] of an severely infected mum, her daughter and a euthanized dog. The dog and the adult both having been confirmed with the same spoligotype of zTB as is found 'locally'.

What is becoming more apparent with every passing year of prevarication by Defra / APHA on this subject, is that through their animals, zoonotic Tuberculosis is now affecting different groups of people. And they may not be as accepting, compliant or pragmatic about their losses and restrictions as cattle farmers appear to be.

Edit: If more information comes to light on the case of the hounds in Aylesbury, we will report in due course.
Posted by Matthew at 8:00 PM No comments:

We have been offered sight of a warning notice which has been circulated to BAS (British Alpaca Society ) members by email, but does not appear on their website. Yet.
Perhaps it ought to.

Entitled BAS Advisory Notice, we reproduce it in full:


As some of you may be aware, there has been a confirmed bTB breakdown at a large herd and is currently under investigation by APHA . We are unable to name the herd as we have not yet had their permission to do so.


Whilst there are breakdowns or suspected breakdowns in existence several times a year in the camelid community, this particular breakdown is significant due to the size of the herd.


While the BAS has no more rights than individuals to access ‘personal’ information from government agencies due to data protection, we are active in assisting where we can and where the affected farm(s) permit. After another herd confirmed disease from alpacas purchased from what is now believed to be the ‘source’ holding, all farms that were known to have had contact were informed back in December 2016 and some have already been tested clear.


Due to the time it takes for APHA to prove disease, there has been a delay in APHA tracing and contacting farms that have moved or purchased alpacas from the infected source holding. Earlier this week, the BAS were contacted by APHA to help with the tracings. The BAS were able to confirm the three farms that had purchased registered alpacas from this ‘source’ holding in the last year and those farms have all been contacted by BAS representatives and are being contacted by APHA now.


We would urge our members to re acquaint themselves with our guidance regarding biosecurity and contact us if they have any concerns.


Please note for the reasons already stated we are unable to give out details unless we have the express permission of the party/parties concerned.


Clearly the BAS only have records of animals which have been registered. If you have purchased, moved or have bred with males from a holding where you think there may be cause for concern and have not yet been contacted by APHA, then we urge you to please contact the BAS or APHA and we can help guide you on the most appropriate course of action. It is imperative that any alpacas that have had dangerous contact with a herd that is known to have bTB, are thoroughly tested in accordance with the 2016 Camelid bTB Testing Scenario Document and Flow Chart which can be found on the BAS website.


With regard to shows, and in particular the upcoming National Show, our bio-security measures at shows have been approved by the BVCS and APHA and shown to be robust over many years; bio security is of paramount importance and the last thing any of us want is to knowingly allow alpacas to shows that have come from dangerous contacts.


We have been closely monitoring the situation and will continue to do so.


If you have any questions at all please contact us either through welfare@bas-uk.com, secretary@bas-uk.com or libby@grassroots.co.uk


Thank you for your time and attention in this important matter. 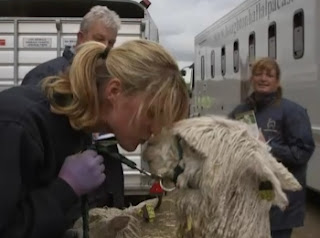 Now this outbreak must have been rumbling for some months (it takes APHA two months at least to confirm m.bovis by culture) and back tracing of pedigree animals is still ongoing. So the timing of this notice is startling, appearing just a couple of weeks before their National Show - [link] on 25th and 26th March.

NB. This picture was snapped at a previous 'National' alpaca show.
Posted by Matthew at 7:15 PM No comments: