Just occasionally - well more than that, if we're honest - we feel we inhabit a different world from some high profile 'naturalists'. For them reality and Beatrix Potter collide, particularly when it comes to badgers.

Last week, the Telegraph - [link] carried a piece on animal tracking described by Simon King. In extracts from his new book, the general public are encouraged to go out and seek signs of badgery behaviour.
Mr. King informs his readers that: 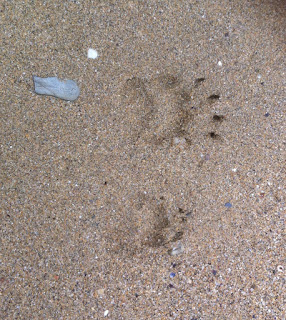 Badgers leave a characteristic footprint that has a “square” overall shape. On harder ground, they may leave nothing more than a few claw marks but even these, with their even spacing and fairly parallel alignment, are distinctive. In addition to individual prints, badgers create well-worn tracks or paths around their territory.

And then he goes on to tell his readers about this animal's ablutions, and in particular,  its toilet training:


Badgers are almost unique among European wild mammals in their habit of digging pits into which they deposit their dung. Because several animals from a badger clan use the dung pits communally, you frequently find several different textures and colours of fresh dung in the same shallow pit. The animals also have scent glands which they use to mark the ground (and each other).

Now not to put too fine a point on it, these piles of badgery droppings, parked conveniently in their shallow latrines, along with urine and scent marks, have proved useful to many scientists - [link] in tracking a Grade 3 zoonotic pathogen, known as mycobacterium bovis.

This bacterium ( the subject of this blog) is the cause of a lethal, slow burn disease called Tuberculosis.


And being a zoonosis, humans and indeed any mammal can contract it, particularly if they are in the habit of sniffing faeces or other material containing it. Such is the influence of this detritus on the cattle skin test, that cattle farmers are beaten over the head with bio security advice to fence off such latrines, this to prevent cattle coming into contact with them. To approach one and sniff, is all too often the equivalent of a bovine death warrant.

For human beings, handling anything near these latrines requires the wearing of protective clothing, masks and gloves. And testing such material requires that the laboratory concerned has Grade 4 clearance - [link] and bio security extending to years of screening tests, for its workers.

Mr. King however, thinks that this product, excreted by one of the most lethal weapons of cattle destruction on the planet, is rather nice. He explains that the smell of a latrine contents:


".. is easily detected by the human nose and is reminiscent of Marmite. I rather like it, but, like Marmite, it’s not to everyone’s taste."

After that description, if you've still got the stomach for it, there's more here - [link] including a picture of the charming interviewer, Boudicca Fox-Leonard, sniffing a chunk of otter poo.

This man's advice should come with more than one health warning.
Posted by Matthew at 7:25 PM No comments:

End of the Summer term.

It seems that around July and August every year, a raft of papers are produced, their authors gad off with buckets and spades, the BBC media very excited,  and Defra line up more cattle for the chop.

This year is no exception, with our old friend Ellen Prook-Bollocks Brooks-Pollock - link gearing up her computer to examine risk factors for TB transmission. A radio broadcast by the BBC last month, quoted her co author Prof. Matt Keeling of Warwick University who explained:


" New research suggests that the spread of TB in cattle can only be controlled if more radical measures are adopted. Culling of entire herds, more testing and cattle vaccination are needed to reverse the spread of the disease. The lead researcher told BBC News that the study also confirms research that shows culling badgers will at best slightly slow down rather than stop the epidemic. The results have been published in the journal Nature. Even if you could cull large numbers of badgers it is predicted to have a relatively small impact on the number of TB cases in cattle."

Prof Keeling's paper was published in Nature, and cited whole herd slaughter, an option rarely undertaken - link in the UK where a wildlife reservoir remains to infect.


"What this paper proposes would finish off the cattle and dairy industry in this country."

This view was echoed by the department's chief scientific adviser Prof Ian Boyd. He said that whole herd culling "would probably result in a rapid decline in the cattle industry in areas where TB occurs".

Prof Keeling and his co-author, Ellen Brooks-Pollock from Cambridge University, said that Mr Eustice and Prof Boyd had misunderstood the point of the study.


In a joint statement they said: "Whole herd culling was investigated as one extreme but was never put forward as a viable policy option."


Err, right. I think we understand that. If all the cattle are dead, there's nothing to test, and thus no TB reactors? Is that about right? Forget the infected badgers, now upspilling a grade 3 zoonotic pathogen into alpacas, sheep, goats, cats, dogs and in some cases, their owners - link

But we think this quote from Professor Keeling, is a classic:


The model was not able to specifically look at the impact of culling badgers, because there is not enough information about their location, infection and movement.


However, the team included an all-encompassing factor to represent infection from environmental effects which includes wildlife.


"Even if you could cull humanely and effectively large numbers of badgers, it is predicted to have a relatively small impact on controlling the number of TB cases in cattle,"

Do you understand that? First Prof Keeling says their model cannot look specifically at the impact of culling badgers, and then promptly and in the same sentence, reaches a negative conclusion for so doing?

Only a scientist with an electronic abacus towing a hefty research grant, could come to such a conclusion. How much better to look back at the effect - link brutal cattle measures, slaughter and movement restrictions had in the past. Zilch. Just shed loads of cash wasted.
And a heap of dead cattle.

The second paper was published in the Ecologist, but widely reported. It tracked badgers with radio collars, and the conclusion was that they do not kiss cattle.
This is a repeat of 'research' - link done over a decade ago, but still the gravy train rolls on.

An extract from the Telegraph - link to the latest Ecologist paper explains that transmission must therefore be 'environmental'.
Well, yes. As an infected badger can produce up to 300,000 cfu (colony forming units) of m.bovis, the bacteria which may cause zTuberculosis, in just 1ml of infected urine, that is no doubt 'possible'. (That's scientific speke for - it happens)

Add to that their charming habit of scent marking territory, including our cattle feed and grazing ground, as well as general incontinence, dribbling up to 30ml of the stuff around our farms, and yes, we have a problem. And that's from only one end. Sputum from lung lesions and pus from suppurating bite wound abscesses add to that 'environmental' burden. As does the fright / flight spitting and spraying this animal indulges in - when not anesthetized to be fitted with a GPS collar..

And other research on record - much more useful in this case, confirms that just 1cfu is enough to infect a calf, and 70 cfu an adult bovine. More on that in this post - link

But there is now more on that 'environmental' burden involving the the lowly earthworm - link
A group of scientists, plastered Lumbricus terrestris (that's a fancy name for an earthworm) with cattle faeces spiked with the M. bovis BCG strain Pasteur to carry out two separate experiments. They explain;


The dissemination, the gut carriage and the excretion of M. bovis were all monitored using a specific qPCR-based assay.

Leaving aside the screening was using qPCR, which Defra insist will not work to identify m.bovis, the bacterium was found to be  carried through into soil for up to four days.

Now, here's thought. TB bacteria is rarely, if ever, found in cattle faeces. Any lesions are usually safely walled up in lymph nodes. But that paragraph and link in our post above details the amount of the euphemistically named 'environmental' burden heaped into grassland by infected badger detritus.

And what are badgers preferred food? Our old friend, Lumbricus terrestris.
Or earthworms to you and me. 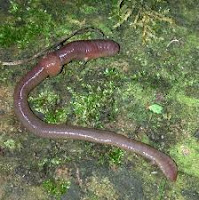