First off the post, is Dr. Brian May's March 2017  Symposium - [link] where the magic circle cogitate and invent new ways of trousering taxpayer cash, attempting to prove the earth is flat or in their communal cases, badgers infected with zoonotic Tuberculosis do not infect anything else at all.

There is a phenomenon which encompasses such groups. It is loosely described as 'Group Conformity', but it is also now recognised in the journal, Nature - [link] which offers a scientific perspective on such stupidity and intransigence in the face of bare facts. The paper deals with political conformity, but may just as easily describe the attitude of most of the high profile badgerists 'networking' under Dr. May's banner, 'Save Me'..

Some snippets from the paper:


"... resistance to evidence may entail disengagement from external reality and increased inward focus."


"Defending one’s beliefs against challenging evidence is a form of internally directed cognition, involving both disconnection from the externally presented evidence and a search through memory for relevant counterarguments."


".... when people are confronted with challenges to their deeply held beliefs, they preferentially engage brain structures known to support stimulus-independent, internally directed cognition".

In other words, when people have settled on their particular beliefs, they shut off external stimuli and rely on an internal stock of arguments to validate them. They create their own bubble and dwell within it.

Having witnessed this over two long decades, (twenty years in which GB slaughtered half a million sentinel reactor cattle) we'll go with that explanation from our co-editor..

And then there is, as we have pointed out before. the 'gold standard' of disease transmission, familiar to epidemiologists if not to many others with obscure degrees, or no scientific background at all. These are a short list of 'postulates' which, if fulfilled, it may be assumed disease transmission will occur to any vulnerable species. A 'scientist' does not need to observe such transmission happening or have recorded such an event.

First described by Professor Koch in 1884, updated several times since, most notably by Evans in 1977 and then again by our co-editor a century after the initial finding.

This is pure epidemiology, where if certain events happen, (causality) then how transmission occurs does not need further investigation. Such transmission can be assumed. And searching Parliamentary questions aimed at just that conclusion, formed the anchor of this website in 2004. The answers we received showed that the postulates of zoonotic Tuberculosis transmission from badgers were fulfilled. There was no need for the £squillions spent on spurious research, which sadly still goes on. The recipients of this largesse are not any sort of solution, but the main part of the problem.

These early postulates from Koch upgraded by Evans include:

* Experimental reproduction of the disease possible

• Measurable host response following exposure to the cause

• Elimination of putative cause reduces incidence

• Prevention of the host‘s response eliminates the disease

• The whole thing should make biologic and epidemiological sense.

But as we pointed out in 2014 - [link] , how this Grade 3 zoonotic, bacteriological killer has been handled in this country over the last three decades make no sense whatsoever; biological, epidemiological or any other descriptive term Defra can dream up.

And from the past history of the listed attendees at Brian May's Symposium, we do not expect any more sense to emerge. Only Oliver Twist's  begging bowl, for more research. 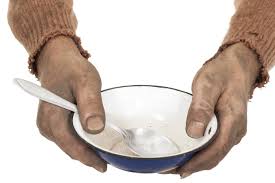 As one of our more acerbic contributors pointed out, the most helpful thing anyone could do to eradicate zoonotic Tuberculosis from our country's cattle, goats, sheep, pigs, alpacas, cats and their owners -  and its maintenance host, badgers - was when Dr. May's badgerists were all safely in one place,  lock the door.
And throw away the key.

Christmas thoughts 2016 - and a turkey to chew on.

As Christmas draws nearer, Defra has launched another Consultation - [link] document to stuff into your Christmas stocking. This is a proposal to continue a 'management' strategy for badger numbers in cull areas, after the initial four year blast.The document explains thus:


1:3 Licences have been issued under section 10 of the Protection of Badgers Act 1992 and section 16 of the Wildlife and Countryside Act 1981 to enable the culling or vaccination of badgers for the purpose of controlling the spread of TB in endemic TB areas. When successfully completed, these licensed intensive culls can be expected to reduce cattle TB breakdowns (see paragraph 3.2) in an area for around seven and a half years. To prolong the disease control benefits it is necessary to maintain a steady badger population at the level achieved at the end of the licensed culls.

Now that would seem to indicate that the moratorium on section 10 (2) a of the Protection of Badgers Act 1992, bought and paid for with £1m bung in 1997, has been quietly lifted?
But we digress. The consultation document continues:


1:4 Natural England (NE) would need to licence a supplementary form of culling to achieve this.[ Ed- the disease control benefits of a smaller number of badgers] Continuing with badger control in this way is consistent with the TB Strategy’s adaptive, evidence-based, long-term approach to disease control and would complement the other measures within the Strategy.

The paper explains that two such farmer-led operations have now completed successfully their fourth and final year, eight areas have two or three years to run and more than 30 other areas have expressed interest in starting operations.

And then possibly the most sensible thing that the CVO has said in a long time:


The UK Chief Veterinary Officer (CVO) advises that preserving over the long term the benefits achieved through these operations is important to sustain the good progress being made on the strategy.

In other words, a few disparate patches shooting badgers for 42 nights, just doesn't cut it, given the scale of government neglect of zoonotic tuberculosis in wildlife, over the past two decades.
The document explains more:


4.12 Licensed supplementary badger control must start in the year following the conclusion of a prior cull, as allowing the badger population to recover and then undertaking badger population control risks causing a perturbation effect in cattle TB incidence and undermining the disease control benefits achieved.

What we glean from this, is that further culls may be licensed on a 5 year rolling timescale, and certainly before giving the badger population time to recover and reinfect sentinel cattle. But to qualify for this, farmers must also comply with a shed load of thought-to-be-important sops to the badgerists, in the form of cattle controls, biosecurity and they must continue to jump through ever increasing NE hoops.
None of which will have the slightest effect whatsoever.

Meanwhile, badger expert Rosie Woodroffe (who explains helpfully that she is a ' disease ecologist ' ?? Que? Is there such an animal?) has posted an abstract - [link] explaining that the vaccinated collared badgers playing in west Cornwall showed no different behaviour patterns from their un-vaccinated sett mates.

With respect, the ranges and rambles that vaccinated badgers take, are of less importance to a cattle farmer, than the detritus they may leave behind. And caging, jabbing and then releasing a badger already infected (but possibly not infectious at the time he is jabbed) is perhaps not the wisest of activities, especially when even a clean badger can succumb to a dose of m.bovis, after vaccination.

Remember poor old D313? - [link] We do. And in that posting is the disgraceful preamble of Woodroffe's old boss at the ISG, explaining to the EFRA committee that at its inception, their £74m trial, from which Woodroffe is so keen to quote, had a predetermined conclusion.
He taught her well.

In a recent visit to the Welsh Assembly, using ten words where one would suffice, our Rosie had this to say:


Professor Woodroffe: Yes, I should preface what I say, that, whilst I’m a disease ecologist, I am primarily a wildlife ecologist, so, you know, I’m not the biggest and best expert on cattle TB, except as it applies to badgers; badgers are particularly my expertise.

Nope Rosie; badgers are your bread and butter. And you'd like to keep it that way.

Read the whole ramble on this link - [link]

And you're gonna love this one, from 'disease ecologist' Rosie;


[81] Professor Woodroffe: In terms of other hosts, evidence suggests that the principle host, or the overwhelmingly most important host of TB in this country, is cattle.

That 'evidence' would be the modelling from the RBCT would it? Where two parts cattle to one part badger was the rough assumption fed into Christl Donnelly's magic box? She continues:


The evidence strongly suggests that badgers are involved.


Badgers can and do give TB to cattle in those places where that’s a serious problem. The best estimate of badgers’ contribution is that they’re responsible for about — in England, this is; in the high TB risk areas of England — 6 per cent of newly affected herds.

Whaaaat!!!
Rosie then rambles into the range of 'confidence levels' for that wild assumption of just 6 percent badger related cattle breakdowns - presumably leaving 94 per cent of outbreaks down to cattle? 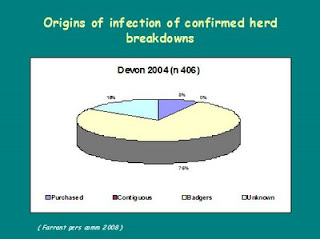 Actually she estimates 75 per cent - but let that pass. She's got an 'ology, after all.
But please look carefully at the pi chart above.  We have more 'confidence' in the actual figures complied in Devon by veterinary professionals, who having excluded cattle contact and bought in cattle, attributed some 86 per cent of new breakdowns to - badgers.

So this year ends with another consultation, inviting farmers to mop up government negligence in disease control - and pay for the privilege;  and more wild statements from people who make their living by keeping this gravy train going. As Bryan Hill - [link] says in his newly published book, "20 per cent of scientists say one thing, 20 per cent will contradict that and 60 per cent ask for more funding".

Merry Christmas from us all.
Posted by Matthew at 7:47 PM No comments: