Goldilocks - When to kill a Cull. 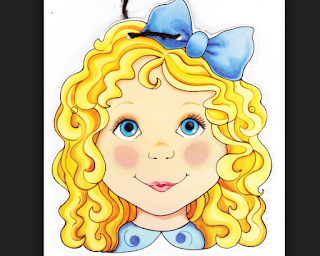 Not the fairy tale girlie, with three bears, Goldilocks is also the description of the principle of getting the outcome of a scientific process  'just right'. Described in Science Daily, -[link] the Goldilocks principle is one of balance to achieve the desired outcome.

So how does this relate to badgers, cattle and zoonotic Tuberculosis?

Published on March 6th, The Royal Society - [link] described a paper entitled 'When to kill a Cull'. Apart from a title which gave us pause for thought, that does relate to badgers, cattle and the control or eradication of zoonotic tuberculosis. The paper explains:


Culling wildlife to control disease can lead to both decreases and increases in disease levels, with apparently conflicting responses observed, even for the same wildlife–disease system.     There is therefore a pressing need to understand how culling design and implementation influence culling's potential to achieve disease control.


We address this gap in understanding using a spatial metapopulation model representing wildlife living in distinct groups with density-dependent dispersal and framed on the badger–bovine tuberculosis (bTB) system.


We show that if population reduction is too low, or too few groups are targeted, a ‘perturbation effect’ is observed, whereby culling leads to increased movement and disease spread. We also demonstrate the importance of culling across appropriate time scales, with otherwise successful control strategies leading to increased disease if they are not implemented for long enough.

The paper is modelled - and some of the hieroglyphics, although pretty, are beyond our editors, but in a nutshell we glean that if you do a rubbish cull on a grossly infected population, you spread disease through perturbation, whereas if you cull all infected individuals - wipe out, then zoonotic tuberculosis disappears. But so do badgers.

The Goldilocks banding in bright yellow is the modelled ideal.


Below some of the modellers calculation  tools, and their Goldilocks charts. 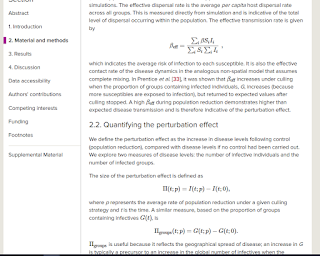 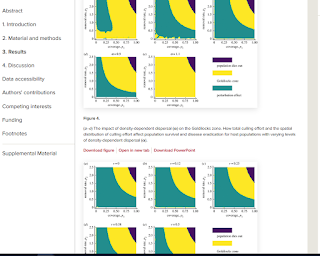 Now going back to 1997, when the notorious RBCT Badger Dispersal Trial began, launching into an infected population for 8 nights only, annually if you were lucky, all this was known.

Especially to the chief bear, who led the group, the diminutive Professor John Bourne, who delighted in informing politicians - [link] on the EFRA committee that the outcome of his trial was known before it started, and that it was designed in such a way to protect badgers.


'When to kill a Cull' indeed. That charade was Goldilocks in action.

And we also know from the answers to Parliamentary Questions that the Thornbury trial which culled for 8 months, and removed most of the badgers in that area using underground group euthansia, kept cattle clear of zTB for at least ten years. And that the reason it was so successful was:

So back to Goldilocks, and one could say, another wodge of money spent stating the obvious.

This is a chart of various badger culling exercises, and their effect on cattle TB over the last four decades. 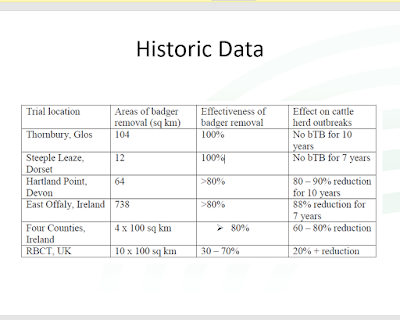 So basically, if you are going to cull an infected group of animals, do it thoroughly, for long enough and over an appropriate area .. or you end up making things worse. Simples isn't it?

Approaching the 6th year of badger culling in the two pilot areas of Somerset and Glos., and with over 40 per cent of the High Risk Area signed up to manage infected populations, how are things going for Great Britain’s 25 year TB eradication strategy?

In August 2017, after two years of culling, the Brunton report - [link] gave the figure of a 58 per cent drop in herds with TB trading status Withdrawn in Gloucestershire. More recently the North Cornwall cull area - [link] noted a similar drop after three years. And where herds have been placed under restriction, that is often for an inconclusive reactor or a bought in animal - a detail missing from the TB Interactive map.

Compare this to New Zealand, which undertook a similar population reduction of their infected wildlife, (the brush-tailed possum) and the country achieved a respectable drop in TB incidence in cattle. But then NZ stopped culling - with no management follow up. The result of this ‘one off’ control, was a time limited reduction in TB in cattle of 3-5 years, only for it to increase as possum numbers recovered, together with the infection they carried.

After a sporadic, inefficient farmer led culling programme which followed, an Animal Health Board, independent of government (but set up by them) and including cattle farmers, took over managing TB operations. Clear and regular targets were agreed, with staff performance reviewed annually by an independent company.

Thus in New Zealand, those with responsibility for eradication of TB in cattle, are accountable to those who wanted to see TB in cattle reduced.

New Zealand culls 90 per cent of possums over all affected land.

Compared with Great Britain, that is a long way from our progress, impeded by a drag anchor of guff, obfuscation and noise. Put simply - lies. .

In 2011 Defra produced a paper describing how they wanted to "pump prime" - link farmers to accept the concept of vaccinating badgers, as opposed to culling any at all.

The Badger Vaccinne Deployment Project (SE3131) - [link] was probably the first wide spread trial of badger BCG in the field. Its secondary aim was " to test the hypothesis that vaccination deployment had an effect on the incidence of bTB in cattle in the BVDP area and its buffer through comparing trends in incidence in these areas to trends in matched comparison areas where no vaccination had occurred."

Running from 2010 - 2014, the effect of vaccination of local badgers on the incidence of cattle TB, the BVDP concluded:


"The results of this analysis suggest that badger vaccination had no effect on cattle bTB incidence, as demonstrated by the decrease in OTF-W incidence rate in both the BVDP area and the comparison areas since the start of the BVDP."

Having cancelled a plan cull, another area to trial badger BCG was part of Wales, along with areas in the south west England: we report their conclusions below. But the myth lie still continues, with the Wildlife Trusts, National Trust and Badger Trust all offering vaccination of any old badger, infected or not, as having a beneficial effect on cattle TB - and as an alternative to a cull.

So in Great Britain, we have scattered areas, culling 70 per cent of badgers, with patches, some large others small, within them, offering vaccination and keeping residual infection alive.

This phenomenon has become more apparent with reports from the latest state sponsored vaccinations. In Wales this was along with 6 monthly testing and bio security, overseen by veterinarians, produced by the Intensive Action Area . (IAA) This area reported its six year results in 2016, and concluded - [link] that:


"Overall the long-term trends in the IAA [Intensive Action (vaccination) Area] and CA [Comparison Area]are similar." "Notable differences in indicators of TB incidence have not yet been seen...".

And a year later, in October 2017, UC Dublin and the Quantitative Epidemiology Group in the Netherlands published a point study - [link] on a field trial of badger vaccination. The result?


“.. a complete lack of effect from BCG vaccination on the infectivity of vaccinated badgers was observed, i.e. vaccine efficacy for infectiousness (VEI) was 0%. “

The only project which post mortemed badgers after vaccination, the Lesellier trial - [link] in 2011, found all had lesions and all were shedding. One individual (D 313) was so badly infected he was euthanized. We remember him well.

“ Each animal was deemed to be TB-free on the basis of three consecutive negative results to both tests, spanning a total period of 24–25weeks.”

This is very different scenario from cage trapping into an infected population, and vaccinating any old badger, regardless of its health status, often more than once.

The BCG vaccine used is limited in its licensing, having achieved LMA status only in that ‘it does no harm’, to pre screened badgers’. As far as we are aware, no efficacy data has been produced to lift that status.

But continuing the 'honour the lie', last month, Cornwall Wildlife Trust - [link] announced their own ‘trail blazing trial’ of badger vaccination in part of Cornwall. An area ringed by cull areas and the sea. They are seeking donations to help farmers fund it.

This was not trail blazing at all. It perpetuates and honours all the lies told about vaccinating badgers, and ignores published results of  trials conducted years before. Thus despite these long term vaccination results published above, the ‘pump priming’ continues, with Wildlife Trusts encouraging hard pressed farmers to vaccinate - and pay for it. 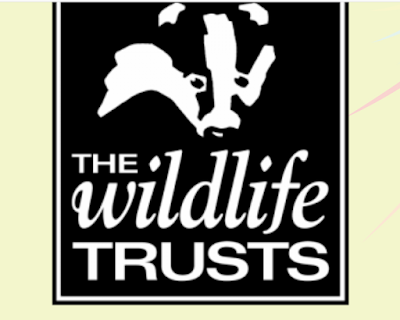 So compared with New Zealand's policy of TB eradication, it appears that in Great Britain, those with responsibility for TB reduction are accountable to those who are most vocal about badger culling and who are largely disinterested in TB reduction in our cattle and other mammals, large and small.

And they and their paymasters continue to ‘pump prime’ farmers and general public about the efficacy of badger vaccines as they rattle their aptly decorated collection tins..
Posted by Matthew at 11:21 AM No comments: