Pasteurization was brought in for milk, as one of the very few processes which will zap that tough bacteria, m.bovis and cooking offal and other parts of meat animals gives the same protection.

But we hear from the Sunday Times (paywall) that vets are reporting infection in indoor cats -[link] which have been fed a 'fad' diet of raw meat / meat products.

A letter has gone to veterinary publications to make vets aware of the risk to their  client's pets. 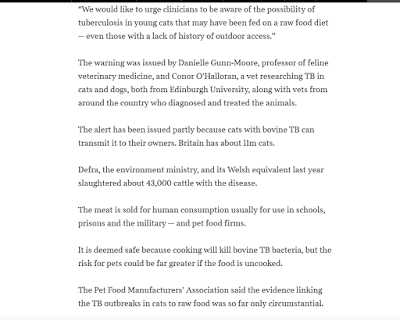 This warning was issued by a lady we have heard from before, Danielle Gunn-Moore from Edinburgh.

It was this lady who with tech firm Bio-Best, developed a blood test - [link] for zTB in cats. At a cost of £200 per moggie.

Ms. Gunn-Moore was requesting more research back in 2013 which we reported here - [link] And we mentioned - [link] cases of cat to owner transmission in 2014.

The meat and offal from cattle sold into the food chain as 'reactors' to the skin test - some 43,000 last year - is perfectly safe when cooked. But apparently, some pet owners are being persuaded to go au naturelle with their pets' feeding habits, and offered a commercial raw cat food diet.

The cats involved thus far have all been fed this product.

The Times described this method of feeding as a 'fashionable diet' based on the concept that uncooked meat and bones was natural and thus healthier.

We would aver that offering raw meat and offal of unknown provenance was playing Russian Roulette with any mammal's health.

The Pet Food Manufacturers' Association say that evidence linking the TB oubreaks in cats to raw food, is so far, only circumstantial.

Posted by Matthew at 7:54 PM No comments: