As MPs pack their buckets and spades and head off for the summer recess, we re-examine the posting which we did in April - [link] In that, we asked a somewhat rhetorical question:


"As Defra and its agencies are the only people who have the power to control zoonotic Tuberculosis in wildlife, but choose to exercise their right not to do that, why should cattle farmers suffer the consequences?"

And it seems those 'consequences' in the form of ever more punitive cattle measures are on their way, courtesy of AHVLA's new boss, Chris Hadkiss. The man obviously hasn't researched - [link] his new department very well at all, but we digress.

Farmers Guardian - [link] has the story of his plans for us this autumn. But it is the comments below the article which are well worth a read. As is this little gem from career civil servant Mr. H, who after commenting on farmers 'becoming reliant on government support' made the staggering observation that:


“It does concern me – we don’t know it happens but it is quite possible – compensation is repeatedly paid with no improvement on farms."

Well hallelujah! Wake up and smell the coffee Mr. H. That is what happens with a one sided policy, as your predecessors found. Take out the cattle, even or especially those from farms with no bought in animals and no neighbouring cattle contact, but leave the source of the problem behind and you (or your department) end up shooting even more cattle.

On internet forum - TFF - [link] responding to the FG article, many comments echo those in Farmers Guardian.

And this thread on British Farmers Forum - [link] suggested that if farmers paid to control  zTuberculosis, they would have more say in policy implementation. Again, the comments are worth a read.

Unusually for farmers, the theme through most of these comments is united.

Government introduced statutory protection for badgers, elected not to use that statute to control the disease endemic within them and now wants livestock farmers to 'take responsibility' for the inevitable mess - as in pay for two decades of political intransigence.

But until government loosens its vice- like grip on the statutory protection which surrounds this animal, and treats zoonotic Tuberculosis with the respect a grade 3 pathogen deserves, no matter how much money is poured at the problem, or by whom, it's a hiding to nowhere. 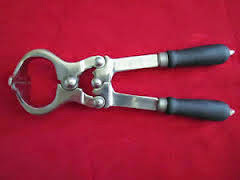 Cattle farmers and vets will recognise the pictures which illustrate this post, and many will have a pretty good idea what they'd like to do with the equipment.


And on whose anatomy.


But for those readers who do not recognise this particular 'vice', a description of its capabilities is here. - [link]
Posted by Matthew at 7:02 PM No comments: