In 2005 we posted on the newly emerged threat of bTB to Michigan's cattle herds. Politicians and veterinarians had a dilemma with the needs of hunters and livelihoods of cattle farmers with tuberculosis the bone between two dogs.

Supplementary feeding of deer to encourage bigger horns, also had the effect of bringing them out of the woods to eat from molassed corn buckets, which could be shared by cattle. A voluntary ban on this practise was in place when the then Defra shadow MP Owen Paterson visited the state in 2005, to see for himself how such disease dynamics were handled.

In an update to this story, we learn that Michigan has made supplementary feeding illegal, and has also introduced a bounty on deer found to have bTB. The Michigan Department of Agriculture & Rural Development has announced an incentives program to encourage more Michigan hunters to have their deer tested for bovine tuberculosis.

"Under this new program, if a wild free-ranging, white-tailed deer harvested during the 2011 hunt is turned in for bovine TB testing, and it cultures positive, the hunter may apply for a $200 incentive," said MDARD Director Keith Creagh.

Bovine TB is a contagious bacterial disease of cattle that can affect other mammals, including humans. In 1994, a unique strain of bovine TB was identified in Michigan's free-ranging deer.

"MDARD recently announced 57 counties in Michigan's Lower Peninsula achieved bovine TB-free status; but there is still a pocket of bovine TB in deer that can be transmitted to cattle," Creagh said. "This new incentive program is one tool in our toolbox to help refine the footprint of the disease and protect Michigan's $9.2 billion beef and dairy industries."

"Some of the best hunting in the state is in Northeastern Lower Michigan," said State Sen. John Moolenaar (R-Midland). "Our wildlife enthusiasts can show they care about TB eradication, and at the same time, Michigan's Department of Agriculture and Rural Development will reward them for removing disease from the landscape."

Under the Incentives Program:

Hunters must take the deer to a DNR check station.
They can have the antlers removed, but the head is submitted for testing.
DNR collects the heads from all the check stations and transports them to the Wildlife Disease Laboratory at Michigan State University's (MSU) Diagnostic Center for Population and Animal Health.
If the deer is confirmed to be TB infected, the hunter will receive routine test notification from the DNR laboratory which will include an Incentives Program contact number.
Notified hunters should contact MDARD with their confirmation code. A form will be mailed to the hunter's address for them to fill out and mail back for payment.

Upon receipt of the completed form, hunters will be mailed $200 for each TB-positive deer harvested.

Visit the Emerging Diseases web site for an all-positives map and additional information, including an advertisement about the incentives program; or to join the Michigan Animal Health LISTSERV: www.michigan.gov/emergingdiseases.

Link to more information on bTB in Michigan's white tailed deer is on this site.
The picture (from the site) shows tuberculous abscesses on the lungs of a deer.
Posted by Matthew at 8:05 AM No comments:

Although the operatives of the Badger Dispersal Trial RBCT ended their 8 night forays (if they arrived at all) and chopped up the cage traps in 2005/06, data collection from this exercise in prevarication, continues.

We posted the first offerings from Prof. Donnelly's mathematical abacus in 2008. This was followed by a further tranche of number crunched advantages (and cost disadvantages) in 2010 which we posted here.

Exploratory analyses stratified by 6-month periods (Table 1) are consistent with an ongoing, but diminishing (test for temporal trend p=0.008), benefit of proactive culling continuing through the latest 6-month period analysed (55 to 60 months post-trial).

The paper also observes that "the effects observed outside trial areas remained consistent with no ongoing effects of proactive culling in these areas."

..... we can at least see where the current 'benefit' of culling modelled at a modest 16 per cent only, has come from.

But in the real world, well away from the square root of stupid, one would assume that the response to culling an infected GROUP of badgers would be somewhat different from picking off the scent markers one at a time during 8 nights annually, with time out for FMD and during hibernation periods, over six years. Thus the resulting drop in cattle TB would be more marked, as in Thornbury where a 100 percent drop in cattle TB was observed over a decade later, and more recently the RoI strategy where a more thorough and ongoing clearance is having marked and beneficial effect on cattle TB incidence.

A full analysis with graphs, of all this modelling post Badger Dispersal Trial RBCT can be seen here.
Posted by Matthew at 7:16 AM No comments: 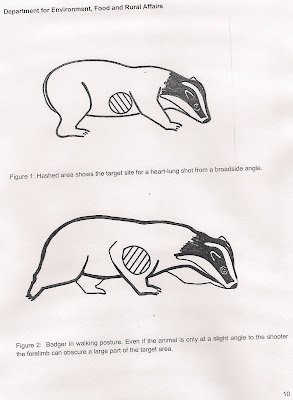 After a pep talk to the troops in Exeter this week, NFU leader Peter Kendall was in 'head teacher' mode - we're told.

You get the picture ?

But when challenged Mr. Kendall said no, he had not read Natural England's proposals.

Unlike the NFU president, if any farmer wants to understand the commitment being asked for, and if you read nothing else from the Natural England library on 'how we don't want to cull badgers' then have a look at their costings in Annex C.

The bio security obligations intended to form part of the package, but are said to be 'not stand alone' are in in Annex D. and Annex E.

A working draft of the NE Management Agreement in Annex F.

How to shoot a badger (with illustrations -above) in Annex G.

And how to prevent impact on non-participants in
Annex H

The farming organisations who are invited to answer the consultation on these proposals have until September 20th to respond on their members' behalf.
Posted by Matthew at 7:56 AM No comments:

We have explored PCR (Polymerase Chain Reaction) technology in many previous postings. But it appears that some readers and the wider industry are falling behind in just how far these diagnostics have advanced in a few short years.

In 2003, the most usual 'primer' used for PCR was m.tuberculosis complex, an overall grouping of many bacteria, sharing some of the same genetic material. Thus the results were similar to putting lawn mower petrol in a Ferrari. It coughed and spluttered and only achieved an 86 per cent sensitivity. Compared to gammaIFN, that could be considered good - but let that pass.

Move on a few years and last week the International Society for Infectious Diseases, ProMed, reported the findings based on pathology and histology of another dead alpaca. First published in the Veterinary Record, ProMed describes the methodology of 'spoligotyping' to establish strain types of m.bovis, using PCR thus:

Spoligotyping (spacer oligonucleotide typing), a polymerase chain
reaction-based amplification of a region of the mycobacterial genome, is recognised as a rapid and reliable test for the differentiation between _M. bovis_ and other mycobacteria.

".. recognised as a rapid and reliable test, for the differentiation between m.bovis and other mycobacteria. So by amplifying part of the genome, unique to m.bovis it would appear that the Ferrari may function to expectations ?

Thus we offer our continued support to the Alpaca TB Support group for commissioning their Proof of Concept project. If this study can demonstrate that PCR technology, already widely used in VLA for other diseases including Johnnes (m.avium paratuberculosis), is useful in the diagnosis of bTB, then there is every likelihood of its being used for other species, especially cattle. For instance, PCR could avoid the long wait, sometimes of weeks, while bacterial culture is carried out to confirm that a suspected abattoir case showing visible lesions is, in fact bTB.

PCR technology detects m.bovis the bacteria: it is not fussy as to its host. So other species which vets are finding difficult to diagnose with the intradermal skin test (such as pigs), may also benefit. And ultimately, operating in 'real time' and not laboratory based, the technique may prove a vital tool in locating 'environmental' TB spilling back into domesticated species.

As an additional tool in the eradication of bTB, PCR could be extremely useful, plugging a gap in our current tests. Although commissioned and paid for by a small group of camelid owners and others, bTB (m.bovis) in camelids should not be seen in isolation from the disease in cattle or any other mammal, since the same bacteria is responsible.

Please note that any donations to this project should be made direct to the AlpacaTB Support Group who can be found on this link. For more information, see the PCR tab on the top bar, and how to contribute on the 'Donate' button.

This is bTB in an alpaca. And it is not pretty. This animal's lymphatic systemic was bursting with solid cheesy abscesses of bTB, his liver is spotted with abscesses and he was infectious with every breath he took, due to open lesions along his trachea, right up to his throat. 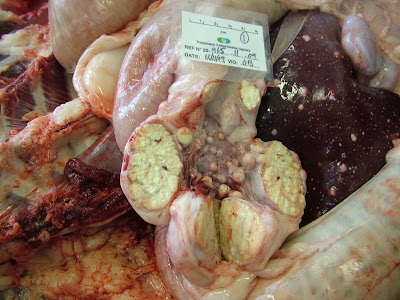 Now whether they are still regurgitating out of date research into PCR technology, or whether it is not in the interests of the wider alpaca sellers to confront the problem of bTB is debatable. But thus far we see no reference to this project on their websites, and certainly no information as to how camelid owners may support it, should they choose to do so.
And we are puzzled as to why this should be so.

But being a magnanimous lot at blogger HQ, we expect the main Societies representing camelid owners are waiting to contribute to some further validation projects for PCR, which could bear their unique names and affiliations.
Posted by Matthew at 7:50 PM No comments: