Published in September was a string of mathematically modeled figures from the original pilot culls in Gloucestershre and Somerset. Or at least the first two years of them.

Pinned out, dissected and calculated into figures that a laymen can understand, Roger Blowey MRCVS has explained to the Veterinary Record, that when the modeled figures are closely examined, the drop in cattle incidents in the two pilot areas is quite startling. 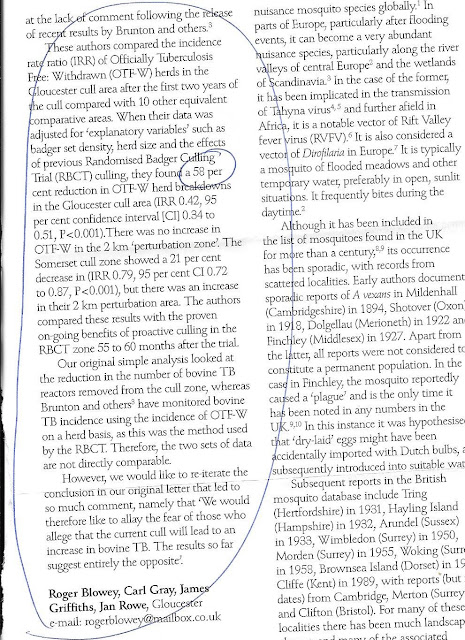 Published by the Wiley Online Library, the paper is headed "Assessing the first 2 years of industry led badger culling in England on the incidence of bovine tuberculosis in cattle 2013 - 15"

It can be viewed on this link. - [link] The modelers compared several non cull areas of both counties, as similar in size and cattle density as was possible, and then extruded the results.
Screen grab from the paper. 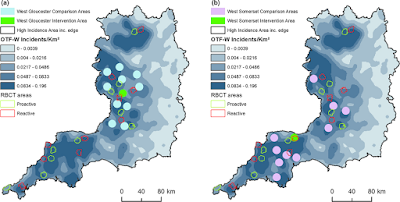 What was probably more amusing, was the that bastion of Badger Protection, the BBC gave this story a whirl on their flagship Countryfile -[link] programme.

But as the figures in Lucy Brunton's paper contain no mention of a 58 per cent drop in cattle incidence of zTB in Gloucestershre after two years with a Gatling gun, one may assume that in some quarters, their  results may prove a tad embarrassing.

Nevertheless, with a new battery in his calculator, Mr. Blowey has done the donkey work, and there it is. A good result. Hidden in plain sight.
Posted by Matthew at 7:37 PM No comments:

A new test or 'dangerous nonsense'?

Bacteriophage technology has been around for almost 100 years - [link]

It is well understood and in simple terms is a bacterial virus which attacks bacteria and replicates within the cells. Work has been done over decades to see if this could replace drugs in the treatment of antibiotic resistant strains of TB.

From 1999, a paper which explains the background to phage exploration and despite high hopes, how it failed to act as a 'cure' for Tuberculosis - [link]

And from 2004, the Journal of Clinical Microbiology - [link] concluded that:


"The small increase in sensitivity over that of direct microscopy does not justify the introduction of this technique for routine diagnosis of pulmonary tuberculosis at this time."

Meanwhile Biotec Laboratories in the UK were also investigating the use of phage technology to diagnose human Tuberculosis - [link] with their FASTPlaque TB tm screen.

The results of this project were not outstanding, with many false positives and also false negatives leading us to question whether the test is species or type specific?

So the results were described as 'inconsistent' with specificity (false positives ) under 90%..

So what has this to do with m.bovis (a close cousin of m.tuberculosis) in our cattle?

A great deal when the company pioneering it offers opportunist interviews - [link] while guesstimating its sensitivity / specificity. The Times covered the story with an attention grabbing headline earlier this month, and this was picked up by the farming press.:


"When the veterinary surgeon arrived at a dairy farm in Devon yesterday, he already knew at least 30 cows were infected with tuberculosis. Their blood had tested positive using a new kind of TB test that is being pioneered by researchers at Nottingham University."

A skin test followed, and the cattle tested clear. The herd owner is quoted:


"He also knows that the 30 cows that tested positive using the blood test, known as phage, could infect the rest of his herd but he can’t afford to slaughter them."


The government only compensates farmers for animals that have failed their standard, approved tests. Those 30 cows have passed more than 30 skin tests each."


“If we knew getting rid of them would clear the TB immediately we would do it,” the farmer said. “But if it didn’t, I would go bust.”

There is also a big risk that the phage test misdiagnosed those positives. In other words, a bundle of hopeful certainty, from a test not validated as a diagnostic test at all and with dubious specificity.

And then this cruncher:


Dick Sibley, a vet who is leading the farm trial, said a survey of badger setts in the fields around the farm had shown 30 per cent of the animals had TB.


Young cows share the fields with those badgers before they are brought inside to calve. “Even if we slaughtered 50 cows out of 500 there might be an infection remaining in the herd that we hadn’t found,” he said. “We can’t ask the farmer to do all this to get rid of the disease, only to let the animals get reinfected from the environment.”

So, using a test not cleared for diagnostics, and with a dubious pedigree, Sibley has decided that in spite of his remarks about the infectivity of local badgers, that the Biotec phage test is the next Big Thing. And more cattle must be killed?

Our microbiologist co-editor has the following comments:


"Phages are well understood,  old technology. They cannot be used as a diagnostic tool.  End of.


To use bacteriophages thus is an abuse of the test and dangerous nonsense". 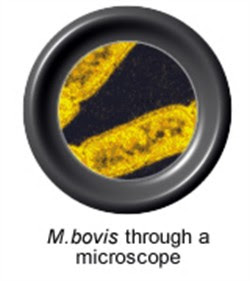 Posted by Matthew at 7:09 PM No comments: