We told you the background of a very expensive New Zealand alpaca, imported in 2017 in this posting - [link]

After twice testing clear of zTB in his country of origin, this animal tested positive in the UK, and thus began his owner's fight against authority.

But after a High Court hearing, Devon Live reports that Geronimo - [link] has lost the battle.

Another casualty of Defra's non policy of the eradication of zoonotic Tuberculosis. 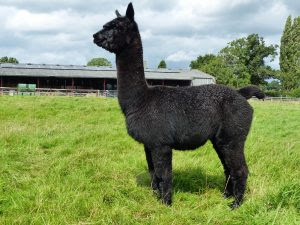 Posted by Matthew at 8:35 AM No comments:

I don't know about you (our readers) but your editors are seething after reading the headline of Farmers Guardian - [link] this week.  In our posting below, we explained that after fifteen long years of banging our collective heads against the proverbial, we had decided to call it a day, leaving this website up as a monument to stupidity. And then we read the headlines of the FG.

In 2007, we reported  the 'Trojan Horse' - [link] factor of zTB control, proposed by John Bourne, when he explained that he would allow farmers to shoot a few badgers, if that went hand in hand with extensive and increasingly brutal cattle controls which he said, would bring the epidemic under control.

And this is exactly what is happening now, a decade after it was proposed. But we digress - the Farmers Guardian this week, reporting on yet another conference on zoonotic Tuberculosis explains:


"Farmers have been urged to ‘take ownership’ of bovine TB control after a survey revealed 70 per cent of those in the high risk area (HRA) have not undertaken any activity to improve their biosecurity on-farm."

(By that, the author of that remark means keeping grossly infected wildlife away from grazing cattle.) 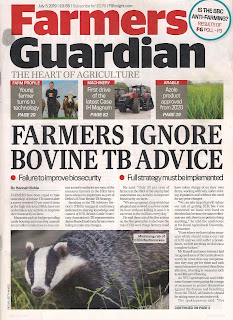 And that headline is some statement. And in many cases - especially those of our contributors - wildly inaccurate.

So take the situation on one of your editors' farms. A closed herd with no bought in cattle, no neighbouring cattle farms touching boundaries and good bio security, but it suffered a 5 year breakdown.

Roll forward to this year, and the cattle measures imposed after the signing of cull contracts, - [link] continue to rain down 365 days / year, while farmers are allowed under very strict circumstances to chase 70 per cent of badgers in a small, well defined area around for just  42 nights and trap / shoot what they can, while paying up front for that privilege.

How is that 'farmers taking ownership' of zoonotic Tuberculosis? And where is Defra's responsibility in all this fiasco which began in 1997 with that moratorium on the culling badgers 'to stop the spread of disease'?  (Protection of Badgers Act. Section 10 (2 a) ) 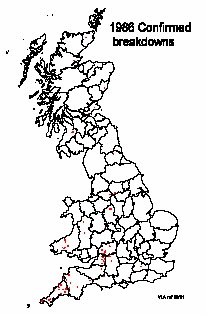 These were parish breakdowns in 1986 - when we were almost clear of TB as a country. The 'Clean Ring' system operated and badger groups were destroyed within a 7km radius of a confirmed outbreak in cattle.

Around 1982, underground euthansia was replaced by cage traps and the land available to the MAFF operatives reduced from 7km to just 1km, and then only on land which cattle had grazed. 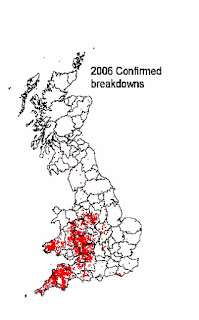 Cattle controls and testing increased, and in 1997 a moratorium was placed on the section of the Protection of Badgers Act which allowed for culling 'to prevent the spread of disease'.

Thus no badgers were culled for this reason at all. None.

And after two decades of prevarication this was the result.


Fast forward to current non-policy, and Zoning the country hasn't worked either, with wildlife spreading disease beyond the ever moving 'Edge area' into so called Low risk counties.


Where badger culls are in progress, incidence is dropping, but slowly. And last year,  GB shot 44,000 cattle. That is appalling. Absolutely appalling and bloody disgrace to all involved in keeping this fiasco going.

The architect of this latest rubbish reported in the Farmers Guardian, is one James Russell, a BCVA representative, who while no doubt trousering a considerable largesse for increased testing of our sentinel cattle, would do well to look back at the impact these brutal, - [link] extortionately expensive and futile cattle measures had on disease incidence in the past.

Mr Russell may also benefit from taking a glance at our parliamentary Questions, lobbied 15 long years ago now, and see the unequivocal reply to the success of the Thornbury badger cull.

It's that simple. And any amount of keeping cattle in hermetically sealed boxes does not solve the problem of grossly infected badgers, piddling over grassland, maize crops and anything else cattle are asked to consume either directly or ensiled.

And neither will chasing them around on just 42 nights out of 365, scattering social groups while not knowing if those destroyed are infected, infectious or not.

Mr. Russell got one thing correct when he is reported to have said:


"We are up against a bug which has adapted and evolved to survive inside its host without killing it, and it is excreted in the millions every day."

But what Mr. Russell did not say is that the most successful host of this bug, which can maintain its body weight, rear cubs annually (and infect them) and live for up to 8 years, is the badger. Not cattle, tested and shot, which are a spillover host.

In fact £2.8 million - [link] was thrown at trying to prove that cattle were a maintenance host of zTuberculosis. And after thousands of samples taken, even from cattle with lung lesions, not one was capable of onwards transmission. Not a single one.

So yet another another straw man - [link] rears its head, and once again it's down to cattle farmers. All our fault.

Or are we seeing, as John Bourne suggested, and so eagerly grabbed by the industry leaders, a largely untargeted and disparate badger cull, while accepting on our behalf, the cattle measures and culling which have failed so spectacularly in the past? A Trojan Horse indeed.

Farmers cannot 'own' the problem of z Tuberculosis while those who have most to say, have not a single thing to lose.

So we are minded to repeat the words of the fragrant Dr. Chris Cheeseman, late of Badger Heaven Woodchester Park, who, on several occasions when addressing farmers about biosecurity in the proximity of his chosen species, was asked how to keep cattle healthy, safe and secure.

His answer which drew gasps from his audience, was pretty straightforward. He said: 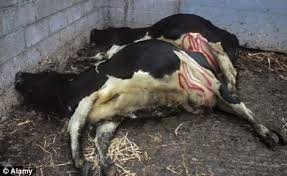 Posted by Matthew at 8:39 PM No comments: