We are grateful for any insight into the strange world of zoonotic Tuberculosis control and eradication in this country, and from time to time a new bit of news (to us) pops up.
As cattle farmers we are used to regular TB tests, usually carried out by the farmer's own vet and with the exception of pre Movement tests, paid for by AHVLA / Defra.
But TB control in other farmed mammals is substantially different and with no control on wildlife vectors, is an increasing problem..

In 2010, we explored TB in pigs - [link] and like pigs, zTuberculosis in farmed deer is usually found at slaughter. But what happens then is substantially different from the regime for cattle.

Testing is not mandatory in the UK for any farmed mammal other than cattle:  thus sheep, pigs, alpacas and farmed deer rely on a post mortem diagnosis. The exception is breeding animals destined for export which need a skin test.

If zTuberculosis is found, then herd restrictions are applied and the intradermal bovine skin test is used as the primary diagnostic test. Whether it is sensitive or specific enough for mammals other than bovines is another story. - [link]

But for farmed deer, there, the similarity to cattle outbreaks takes a significant twist. If zTB is found, a herd of farmed deer faces the same restrictions as a cattle herd and skin tests are demanded by AHVLA. But owners pay. Furthermore only veterinary personnel trained in handling deer can conduct testing, and they are few and far between, belonging to specialist testing 'panel'.

Tests are at 120 day intervals, and two clear herd tests are needed to lift movement restrictions - which in practice is almost impossible as it interferes with the breeding seasons of these animals and apparently may still not pick up the source of the outbreak.

Compensation is 50% of current market value or a maximum figure of £650, whichever is the lower. But this is paid only if the animals are compulsory slaughtered as test failures. No compensation is paid for any animals which owners may choose to slaughter in an effort 'to clean up their own herd' - even if zTB is found at any subsequent post mortem.

Current legislation - [link] is culled from European directives and gives AHVLA power to test for TB in certain circumstances but does not appear to specify by which test. So if a serological test were to be used as a replacement or in addition to the skin test,  would a change in legislation be needed to allow that?

That is a question currently posed by some UK deer farmers to Defra, so that they may trial other diagnostic tests. Some blood assays  used in other EU countries appear to be giving a tad more confidence to the testing regime with farmed deer, and yet Defra appear to be dragging their collective feet over their use, even when owners are paying.

We seem to have heard this scenario before...

Different tests may also work better with the current 120 interval of skin testing for deer, which we hear can be very difficult to accommodate due to the seasonality of the deer breeding cycle.

Many of these problems with  current TB diagnostics will be discussed on March 12th / 13th in Edinburgh when the Veterinary Deer Society - [link] holds its Spring meeting.

Posted by Matthew at 8:49 AM No comments:

The long awaited alpaca PCR Proof of Concept study has now been published in the Irish Veterinary Journal. - [link]

Commissioned by the Alpaca TB Support group, the study was seeking a more accurate test for screening alpacas and llamas for zTuberculosis. And as some fairly hefty sums were bandied about regarding the cost of collecting suitable ante mortem samples, it was suggested that as AHVLA had no shortage of alpaca carcases coming through their doors, that these could provide the relevant material to kick start the project. 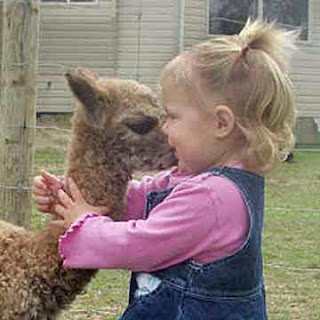 There is a  difference between how the screening tests in use for zTuberculosis work.
The intradermal bovine skin test seeks an immune response from the candidate, to exposure to the bacteria which may go on to cause zTB. Various blood assays seek antibodies which the candidate may have thrown up to fight infection from z TB but PCR (Polymerase Chain Reaction) seeks the bacteria itself.
The skin test has proved extremely inconsistent when used on alpacas. And by that we mean, it's rubbish.

Blood assays, as applied to camelids in a confirmed TB breakdown herd, can throw up some false positives (3-4%), which is upsetting for the owners. Thus a different ante mortem test was sought - with dead alpacas, already in the AHVLA system  providing the raw material.

The first tranche of samples were taken from animals which at post mortem showed advanced gross pathology. (Large and extensive lesions) The Interim report into this part of the study, we explained in this posting. - [link]  And as expected, the more m.bovis bacteria available in the sample, the better the result using PCR. Disease had already been confirmed in the animals used in this project by postmortem, gross pathology and cultures.

A second tranche of samples were taken from animals with much less advanced disease and some may have been from lesions which were not shedding bacteria into the locations from which the two PCR samples (sputum and faeces) were collected. Nevertheless, with no false positives, if m.bovis was present in the samples offered, PCR appeared to be able to find it.

A combination of sputum and faecal samples gave even better results. The paper's authors suggest pooled samples (as with m.avium paratuberculosis) could be offered as a herd screen and they describe as 'highly significant' the increasing trend of positive PCR results in line with an increasing pathology score.


"While more SACs (South American Camelids) were positive in the faecal PCR, problems associated with collection of the nasal swabs post mortem may have compromised the test on this sample type. A combination of the nasal swab PCR and faecal PCR appeared to have a marginally greater sensitivity than either of the tests alone.


Testing of both sample types may increase sensitivity but at increased cost. Nasal swabs and faeces samples are relatively easy for owners to collect though there needs to be consideration of the possible exposure of owners to M. bovis when collecting nasal swabs.


Pooling of samples from multiple SACs may potentially be a useful screening test.


There is a highly significant increasing trend in the proportion of positive results in the nasal swab and faecal PCR tests with increasing pathology score. This confirms, as expected, that a PCR test on clinical samples will have greatest sensitivity in SACs with more extensive pathology.


The number of SACs where culture results were available was small but the results were in agreement with the PCR results apart from three which were culture positive and PCR negative. This finding is not unexpected as post mortem and culture will be more sensitive than a PCR test on clinic samples."

This is a huge leap forward in validating this technology for use ante mortem in alpacas, but also in other species -[link] where gross pathology indicates a huge bacterial spread.

The paper and more background to the project can be found on the Alpaca TB Support Group website - [link] and our grateful thanks for their piloting and funding of this study.
Posted by Matthew at 7:10 PM No comments:

Following on from our posting below which describes a 103 per cent increase in badger 'dens' and as our fellow farmers in flooded Somerset - (link) struggle with the effects of a couple of decades of computer modelled environmental hogwash, we ponder on the fate of all the subterranean mammals, caught up in these 'designer floods - (link).

For centuries, the Somerset Levels were kept dry in summer (the clue is in the name: Summer - settlers?) by the judicious clearing and management of the 'rhynes' or ditches which fed the tidal rivers.  And 'tidal' rivers inevitably empty into the sea, twice a day.

The result was a fertile and bio-diverse habitat, supporting loads of different species - including our stripey friends.  But as our co-editor points out, if your aim is to create a wetland habitat, take a low lying area, and just add water. - (link)

The result of the Environment Agency's valiant efforts over a couple of decades, is a stinking lake of stagnant, polluted water in which nothing can live.
It's a pity they didn't inform any of the inhabitants of the Levels of their long term plans.

It is not the badgers who have 'moved the goalposts'. By deliberately flooding 30 sq. miles of their habitat, the Environment Agency has destroyed the playing field and everything around it. 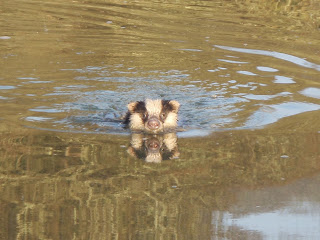 Isn't it against some other Directive or the Bern Convention to drown badgers, because this is exactly what the Environment Agency, in pursuit of a different agenda, has done so spectacularly well?
In fact it could be yet another 'pilot cull'.
Posted by Matthew at 7:03 PM No comments: