It is 'apocryphal evidence' - ignore it.

Just occasionally something comes under our radar which lifts the spirits. And before our readers think that from this post's title, we have ventured into the realms of Greek mythology, we will explain.

Last week's Farmers Guardian carried a scathing, sarcastic but totally delicious letter from David Williams, chairman of the Badger Trust, attacking Lord Rooker. There is no web-link, so we will quote in full:

"The Badger Trust was astonished to read Lord Rooker's claim that the RBCT results could have just as easily been used to show badger culling worked'. (FG December 4th)

We had no idea Lord Rooker was so adept at analysing complex epidemiological data. We trust he will now publish his own analysis in a peer-reviewed journal, just to show how easy such an interpretation is. We doubt that he will do so however.

Lord Rooker appears to select evidence which best suits his view, rather than evidence that is most robust. Only last year, for example, he told the EFRA Select committee '70 per cent of the breakdowns are attributable to badger to cattle transmission'.

This was a divisive claim which totally contradicted the evidence gathered by the ISG.

Using the Freedom of Information Act , we obtained the 'evidence' Animal Health used to produce the 70 per cent figure. It is a painfully simple spreadsheet, adding up how often state vets blamed badgers for an outbreak.

We have spoken of this 'robust evidence' , many times, indeed many of us contributed long hours, completing under veterinary supervision, the TB99 forms which dealt with the reasons which could be responsible for our TB breakdowns. Completion of the forms for the ISG took about four hours, as they were more detailed than the usual epidemiological assessment which has been completed at every breakdown, for decades. This has a tick box list of possibilities, with bought in cattle, common boundaries and cattle contact, shared mechanical equipment etc. among the table together with badgers, other wildlife and residual infection. The possibilities are 'High', 'Low' or 'Nil'.

The personnel completing these forms, and the TB99s for the RBCT, are highly trained veterinary practitioners, with back up support for the data from government agencies such at the British Cattle Movement Service (BCMS), Cattle Tracing Service (CTS), Ordnance Survey office and Veterinary Laboratories Agency (VLA).

So it was a wasteful, arrogant, disgrace disappointing to realise that far from actually using the 'robust, complex, epidemiological data', described by David Williams as having been 'gathered by the ISG', they chose to ignore it.

Within the section concerning the spread of tuberculosis in cattle, the ISG describe their epidemiological base, stating that they included:

"........ local infection across farm borders, infection from animals bought, in particular but not only, from high incidence areas and infection from wildlife, especially badgers. [] In the following calculations, we assume all three sources to be roughly equally important." (ISG 7.24 p148)

So, far from using that robust, complex epidemiological data contained in the TB99 forms to actually see what was going on, the ISG 'roughly assumed' two parts cattle, one part badger, pumped that into a mathematical abacus and switched on.

We understand that Professor Bourne went so far as to describe such epidemiological evidence, so confidently described by David Williams as 'robust' and 'complex', as 'apocryphal' - e.g of dubious provenance, not considered genuine, or of dubious authenticity. We're sure that the government agencies who took part in its 'gathering', are going to love that.

The ISG preferred it would appear, to assume and 'roughly estimate' disease transmission opportunity, and base their calculations of its spread and control on that.

The 'Disease Investigation Reports', about which the diminutive professor was so derisory, but which David Williams assumes were the basis for the ISG report and its conclusions, are analysed by the Epidemiology Unit at VLA Weybridge. But if ploughing through many words is too onerous, the following pictures (charts) are worth a thousand of them. 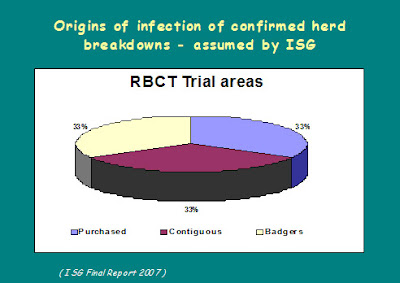 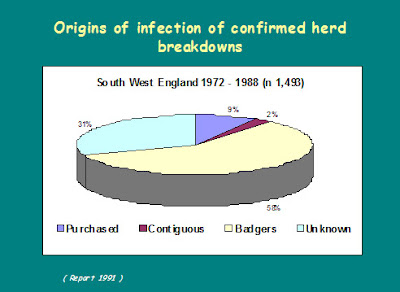 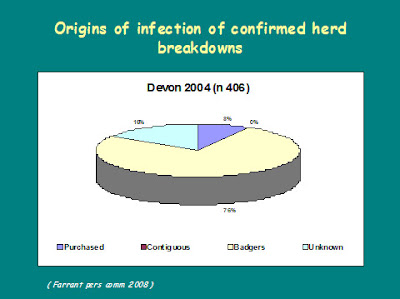 They are taken from a paper presented to the BCVA Congress held in Killarney last month, whose authors describe the basis of the RBCT and compare its mathematical modelling input with the actual 'complex epidemiological data' gathered over decades and held by VLA and some Animal Health offices in the SW.

This shows that from 1986 - 1995 analyses of data held by the Epidemiology Unit, Weybridge, approximately 90% of new herd incidents were considered to be of badger origin. (MAFF 1995, Clifton-Hadley 1995), so Lord Rooker's evidence was if anything, understated.

"The apparently arbitrary assumption of origins in the ISG model, are likely to have resulted in a serious distortion of the disease model. Giving equal weighting to cattle to cattle transmission, contiguous spread, and diseased badgers as sources of outbreaks seems a remarkable and disturbing assumption which was based only on concern that the ISG was unable to determine which proportions of the outbreaks were due to which source.

We are grateful for permission to publish the charts ahead of publication of this paper.
Posted by Matthew at 3:31 PM

Perhaps the ISG should be invited to re-run their mathematical model with the more accurate proportions given above in place of their "roughly equal" assumption.

Incidentally, I couldn't help noticing that the style of Mr Williams' letter is rather similar to that of comments posted by one of the regular Anonymice. Is there something we should be told?

This must be the 'scientific breakthrough' Mr Benn is awaiting.

Merry Christmas to all

Jim's idea is very novel. Use the correct data input instead of 'rough assumptions'? Now that is a very good idea !

Happy Christmas to all.

(Just noticed the pics are doubled up - will attempt to get the boss to fix. They were very difficult to slot in. Apologies. But hey, two the same are better than none at all.)

When and where is this paper being published?

If you mean the paper which produced the charts using correct evidence and not the RBCT's 'rough assumption', it was presented to the BVA conference in Killarney, mid November.
Wider publication will usually follow, in various veterinary / scientific journals.