On Saturday morning, BBC's early morning Farming Today programme covered bTB; in particular they concentrated on the FCN (Farm Crisis Network) report which we covered last month here. This listed comments in harrowing detail of the emotional impact on farmers caught up in the relentless grind of Defra's cattle killing machine which they euthemistically call 'a TB eradication programme'.

The programme interviewed both farmers and vets, who spoke of the 'huge emotional impact', 'fury and frustration' in pretty equal measures and the 'years of frustration' endured with no end in sight as long as the source of the problem remained at large. The veterinary practitioner interviewed described losing good young vets from the industry, who had become totally demoralised by lining up cattle to be shot and of his 'expectation that herds he was testing would fail'. He found the whole thing 'incredibly depressing.'

For a short time the programme can be heard on this link.

But wheeled out at the end of what was (for the BBC) a pretty good coverage, was the inevitible Badger Trust spokesperson. Gone is the bruising spin Dr. Lawson, who, if you remember - and we do - delighted his audience with the comment, also on Farming Today in June 2007, that 'cattle get killed anyway.' His equally crass replacement is Jack Reedy, vice-chairman of the BT.

Asked to comment (why, one cannot imagine) on the huge emotional impact, that continual TB restrictions and slaughter of cattle bring to farmers and their families, Reedy squidged and referred to ISG report. He was quick to dodge the responsibility of 'solutions to the problem', replying that any such were those of the ISG, "not ours".

But then the bit that had us reaching for the 'off' button. The problem [of badgerTB] he implied was not 'emotional' at all, but 'economic'. Thus when Reedy was asked what the BT's solution was to the present problems he regurgitated the ISG solution of 'living with it'. This was to "bear down" on the level of herd breakdowns, and to allow farms to continue trading "even if not definitively clear of infection". And the level of infection in GB will attain, what? We have almost 10 percent of herds having had a TB restriction or 'incident' now. What does this organisation think will happen to the level of environmental contamination should it not be curtailed in their 'chosen' species?

Reedy then explained the TB problems of farms by saying that the "shoe pinches" because of the "economic penalty" which a breakdown entails, and not because of its impact on the animals or farmers. He went on to say that it is "very unusual for farmers to get fond of their cows" and that they are "usually very careful not to". Cattle are not pets (he helpfully pointed out) So pay them enough, and they'll roll over and the TB problem will just disappear? We think not.

At the end of his crass and condescending little speech Reedy reminded his listeners [re a cull of infected badgers], of how this was to be done, who was going to do it, and then rhetorically, "If we cull badgers, who is going to pay?" 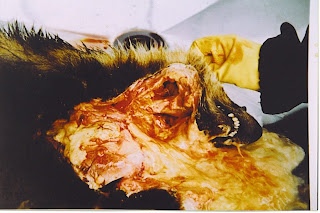 Maybe he should ask himself who is paying at the moment because we are not culling infected badgers. And in that equation, he should include pet owners and farmers of minority species equally tangled up in the infective swamp left behind by his cult status money spinners icons, who inevitably end up like this.
Posted by Matthew at 8:00 AM

It is utterly disgraceful of Mr Reedy to presume to tell farmers what they do or do not feel for their cattle. What on earth does he know? As anyone who has actually read the Farm Crisis Network Report would immediately realise, the feelings of loss experienced by farmers who have had cattle slaughtered as a result of TB are all too real. How dare Reedy try to pretend they are simply crocodile tears which stem from thoughts of the (inevitable) economic consequences.

I had occasion to ponder what he said at 3.00am on Monday morning as I went out to see to a cow who was calving. Was I doing so out of a sense of duty to an animal for which I was responsible, or for fear of the economic loss which would result from the death of cow and/or calf if not given assistance when needed, or from feelings of fondness towards a 15-year old cow who has been on this farm since a heifer and has served us well. I would have to answer, yes, to all three, but I know which reason predominates - and it's certainly not Reedy's "economic" one.

I have long thought that the Badger Trust lives in cloud-cuckoo-land, but have now come to the conclusion that they inhabit another planet altogether.