We never underestimate the amount of cash spent re-inventing wheels, and repeating previous studies. Especially not where badgers are concerned. Two years ago Defra released a study paper upon which our Trevor, late of the Badger Trust, attempted a spot of verbal gymnastics.
It concluded that too many badgers = no hedgehogs.

And now another paper, from another University has concluded exactly the same. And for any badgers who read the Daily Mail there is even a recipe for the dispatching of hedgehogs. Badgers, the paper says: 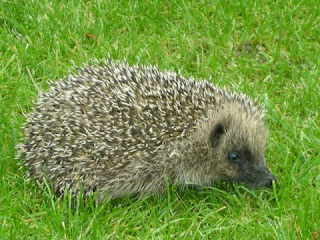 " ..... have learned to use their long claws to prize them [hedgehogs] open - even when they are curled up tight. Once the badger has the hedgehog pinned down tight, it swipes its victim with 1.5 inch claws, pulls it open and bites it to kill it before pulling the flesh from the prickles. The prickles and skin are discarded.."

The paper points out that "badgers have an exceptionally strong bite for their size and will bite each other on the rump during serious disagreements." The report may also have been a tad optimistic about that "bite to kill" statement, quoted above and implying a human death. We have heard that a hedgehog pinned down by his paws, will be peeled like an orange while still very much alive. His screams are not pleasant, and are prolonged.

The ecological effect of an uncontrolled badger population was first brought to our attention by Dr. Willie Stanton who tracked an increase in badgers on his patch for several years, and noted a corresponding decrease in virtually every other small mammal, reptile, insect or ground nesting bird. This latest paper merely reinforces previous work.

The findings come in a study which shows a close geographical link between the decline of hedgehogs and the presence of badgers.
Researcher Dr Anouschka Hof, of Royal Holloway University of London, estimates there are about a million hedgehogs in Britain.
'However, they have been declining over the last decade, especially in areas where there are a lot of badgers,' she said.

Read more: http://www.dailymail.co.uk/news/article-1215178/Hedgehog-lunch-Booming-badgers-developed-taste-spiky-little-rivals.html#ixzz0RpZ35VQa
Posted by Matthew at 11:39 AM

Well we have both, badgers and hedgehogs, I have seen hedge hogs using badger holes as shelter, and in my garden, they feed together.

Opening a a hedgehog is not inherent behaviour in the badger, it is learned behaviour.
I have studied the same group of badgers for almost thirty years.
I have only through the generations, seen two badgers manage to open a rolled hog.
The one quite recent event, was a young sow, who once watched her father, do the same.
As then she sat, hunched over the hog, then she rolled it over, to find the join, where head and feet tuck in.
She then thrust her claws, right paw, down into the join, effectively pinning the hog to the ground, she then thrust in the other paw, and unrolled the hog like a carpet, head down she then proceeded to eat the unfortunate urchin.
However this in my observations is a rare event, and I am out all night, at least 3 nights a week, it used to be more, but health prevents it now.

Most of the badgers I have observed, just roll the hog around, and get bored with it.
Badgers don't hunt their food, like foxes do, so they have to stumble across a hog, by accident, rather than design.
More hogs are killed on the road, I think.
They say that fox numbers are less when badgers are present, again not so here, the foxes and badgers have stayed level here in my area.Not sure why that should be the case, and not else where, don't know how extensive these surveys were.

So what they say is true

A rolled hog butters no parsnips !!!

Where badgers have been filmed in cattle buildings all notion of 'territory' seems to disappear as they gather at 'badger Macdonalds'. But in the real world, too many badgers in an area fighting for a finite food source, will hoover up all small mammals and ground nesting bird's eggs etc.

Over 25 years our badger setts increased from 2 to 7/8, and I've yet to see a hedgehog. When we had just two setts, we also had lapwings, skylarks and grey partridge. Haven't seen any of those for several years either.