As we have pointed out, Defra's policy of dealing with bTB in non-bovine species is non-statutory. But with the urgency of a dormouse on vallium, Defra offer a few explanatory guidelines, which for alpaca owners and veterinary staff involved with these creatures, may have avoided some confusion.

Defra have no 'right of entry' into camelid premises so unless bTB has been confirmed, are admitted by invitation only. Movement restrictions may then be served, but protocol appears to vary depending on which civil service 'ROD', (Regional Operations Director) is reading which Defra bible and from which area. Some RODs are more equal than others, handing out instructions to highly trained veterinary staff in a fairly arbitary manner, and not necessarily agreeing with 'ROD' in the next patch. Why would they? They have territories jobs to defend. An example of this mish-mash of non-policy, is the use of the blood test on alpacas. While some RODs apparently allow just visibly unwell animals to be tested, others insist on whole herd screening. This test will never be 'validated' and its correct sensitivety / specificity established if it is directed at animals likely to be positive for bTB on ante mortem observations. Conversely, to expect alpaca owners, who regard their animals as pets, to slaughter all positives immediately is optimistic. Isolation and monitoring, combined with other antemortem screens may give a more solid picture of disease status. 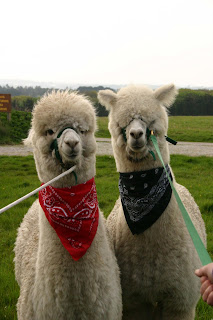 Nobody wants animals with rampant tuberculosis left to fester, (except the badger groups) However the slaughter of three alpaca last week, which had been in isolation for four months found just one positive for TB on post mortem. For the other two extremely healthy animals, their cause of death could have been logged as 'gunshot wound to the head'.

Brief Defra guidelines for 'non-bovine species', have been available since early summer - at least. However they will not help the two alpaca in the photo.

Both are now dead.

Defra documents are written in civil service-ese which is neither easy to navigate, understand or interpret. Here is a taste:

10.2 As with other non-bovine species, there is at present little legislation underpinning the control of TB incidents in camelids in Great Britain, apart from the general power in the TB Orders to isolate and restrict movements of any affected and in-contact animals. There is no requirement to identify camelids or record their movements. DVMs or Local Authorities have no legal powers to enforce tuberculin testing of camelids and slaughter any reactors. Similarly, there are no provisions to compensate owners for the loss of such animals. Therefore, any testing of camelids for TB has to be voluntary, but if the owner does agree to test at the Department’s expense (see below), then this needs to be linked to a voluntary prior agreement to release for slaughter any animals identified as reactors.

Losing animals to TB is bad enough without this cat's cradle of jargon to plough through. Plain English would be good. The links for the two documents are buried contained within the AHO 'Operators Manual', and can be accessed here for Defra's Disease Reporting Procedures in non-bovine species, and the here for tuberculin testing of camelids. We note that the latter advises a 'severe interpretation' of reaction >2mm rather than the standard >4mm used for cattle, until disease is confirmed. And as with much protocol developed 'on the hoof', we understand that this too is not widely adhered to.
Or perhaps the vets doing the tests haven't read the manual either.
Posted by Matthew at 6:10 PM

You left out the fact that these guidelines/protocols are not on the DEFRA Website and are not given to those herds under restriction. So we cannot question DEFRA/AHO's if they are not following their own guidelines. I got a copy 14 months after I was put under restriction and only because I had been on the radio saying DEFRA had no written policy on camelids. Sadly BAS and BLS had been given these in June this year but didn;t feel it was important to pass it onto the likes of me/us going through it. I wonder why that was !!!!