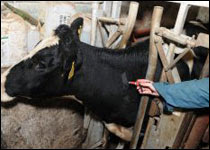 Slowly but surely the UK system of TB testing and cattle controls (if not wildlife control) is coming from that elephant in the room - the EU. We reported a year ago how many herds would need two tests before herd movement restrictions could be lifted. And that situation has now caught up with the Treasury bean-counters. Coupled with an insidious rise in incidence, purely anecdotal and unable to be officially tracked after August due to the inability of Defra's new toy to add up, it seems that the costs of testing for bTB is causing not a little indigestion.

We referred to the February 1st. EFRA committee report in the previous posting on the SAM computer problems, but after discussing closing some AHVLA regional investigation centres, much of its content centred around TB testing and how much veterinary practices were paid for this. It was revealed that although an agreement 'memorandum' signed by both the Ministry and the veterinary profession was in place, Defra now find that they need to alter the basis for this. Although they seemed more than a little reluctant to say why.

The gist of the committee's dialogue centred around a 4/5 year 'discussion' with the main veterinary organisations and their contractual obligations for the work of testing our cattle. Chief executive of Defra, Catherine Brown explained that she had been meeting the BVA very regularly.

"In fact, for a period of time I was meeting with them every month for discussions about how we could move on from a very unsatisfactory situation with a memorandum of agreement that was signed with them and MAFF 15 years previously, which did not have any quality standards in it. They were unhappy because they thought that they should have been being paid more. I was unhappy because I thought that we could not demonstrate we were getting value for money. "

... and then there was that elephant - the word 'illegal' in much the same sentence as 'competition'. Ms. Brown explained that she had talked to the BVA 'intensely over a long period of time':

We were unable to come up with a mutually agreeable solution, and it turns out that it is probably just as well. It would have been illegal, because we are spending so much money and you have to offer the opportunity for competition for more than £113,000 of Government expenditure. We are spending about £20 million a year across the country on TB testing.


(And with the 2011 EU regs requiring double the amount of testing now kicking in, plus increased incidence, that figure can only increase no matter how much Government tweaks it in the short term - ed.)

Thus a rigmarole of jargon spattered dialogue follows as Ms. Brown explains that tendering for the testing of our cattle must comply with 'quality standards', have 'delivery partners', comply with 'legal advice', be 'anti-competitive', not 'against European rules' (she did say the word - once) and following Minister Jim Paice's point that 'legal advice was the trigger'. Ms. Brown replied ;

Devon MP Neil Parrish pointed out that he would like to explore this 'tendering process' and asked how small veterinary practises could compete on a 'tendering' basis:

"What they are worried about is the fact that we are going to get a meat hygiene-type system, where we are going to have one or two companies bidding for the whole country, and vets from all over the world coming in, and there is no personal relationship whatsoever between the farmers and those vets coming in to do the testing.

Jim Paice then blustered waded in with the prophetic observation that;

... having lived through the development of the Meat Hygiene Service, to which you referred, that I have no intention of replicating that experience, I assure you.

That would be replicating this particular 'experience' then would it? And thus we can ignore all the European tweaks previously referred to? No we cannot.

As Ms. Brown pointed in answer to a question from George Eustice:

. Useless Eustice pressed his point again, all the while tiptoeing around that elephant.

" I am intrigued by this idea that you have to negotiate with the BVA. It is almost as if they are a trade union; it is like having a discussion with tube drivers or something. Why are you in that position? If you are paying too much, why can you not just top-slice the fee and, if you have poor performers, stop using them as suppliers? Surely individual practices would not be being paid more than the £113,000 threshold in total, or are they ?"

Although Useless Eustice forgot to mention it, £113,000 p.a is the current European Union threshold for procurement tendering and Ms. Brown confirmed that some practises did indeed receive in excess of that figure. So why not side step them, suggested Useless Eustice?

"I am just curious as to why you subjected yourself to this ludicrous EU procurement process when maybe you could have just side-stepped the BVA and dealt with the issue directly?"


Because she can't?
Procurement is an EU competence which cannot be side stepped. Just like Mr. Paice's MHS 'experience' which he is minded not to repeat. But that option has been signed away, Mr. Useless. Had you missed it in various Treaties?

" I made every possible attempt to check that we definitely had to go through the procurement process, and we definitely do. [] The legal advice could not be clearer: we do not have a choice on tendering."

So it would appear that courtesy of the EU, the LVI vets are for the high jump as well as TB restricted farms.

By restricting TB restocking options considerably and effectively cutting the legs from potential buyers into approved units, the EU have left hundreds of England's TB restricted farms with little income and no outlet for their surplus stock at all. And with their TB testing potentially to be carried out by foreign vets. Excellent.

But back to that elephant. It does occasionally have something to say which makes sense. We covered one such trumpet in this posting quoting DG SANCO on the thorny problem of wildlife reservoirs of bTB.

The elimination or reduction of the risk posed by an infected wildlife reservoir enables the other measures contained in the programme to yield the expected results, whereas the persistence of TB in these wildlife populations impedes the effective elimination of the disease.

And as the posting below, which covers the 'immediate effect' ban of movements of some TB restricted stock shows, the elusive European beast can move swiftly when it suits. On the procurement directive and the cats cradle the BVA have made for themselves on testing charges we await developments with interest, but on the DG SANCO recommendations - don't hold your breath.

That particular elephant's trunk is in a definite knot.
Posted by Matthew at 5:34 PM