Today we post the story of a closed dairy herd in Cheshire which has bought in no cattle for 16 years, has no neighbours with cattle directly contiguous but has suffered a devastatingly serious 70 cow loss at the latest TB test. Dairy farmer Philip Latham told his story in the Crewe Chronicle .


After doing the usual 'risk assessment', his AHVLA support officer has supported his assertion that badgers are to blame for the breakdown.. Having inspected Mr. Latham's livestock and maps of his farm she commented:


“He doesn’t buy in and has no contact with animals from farms around him, so the disease has to have come from wildlife and that tends to be badgers. Deer can carry TB but there aren’t deer in that area. In my opinion the information available points to badgers being the source of TB on this farm.

As a further indication of how her workload had changed over time the officer, Mrs. May (no relation, we are assured,  to the rock star leader of Team Badger) explained that :


When she first started working for the Government agency [AHVLA] only a small part of her two-day workload involved working with TB – now that is all she deals with.

What an miserable job for an AHVLA person to do, Condemning cattle to Defra's mincer on daily basis and dealing with stressed out frustrated farmers, when her own carefully crafted risk assessments show that the primary cause is wildlife, with a name most dare not speak. And they are ignored, as are her reports. This is a chart of badger related breakdowns in Devon in 2004 as produced from those AHVLA mapped risk assessments.
The source of 76 per cent of breakdowns were logged as 'Badgers', 16 per cent as 'Unknown origin' and just 8 per cent to purchased cattle. 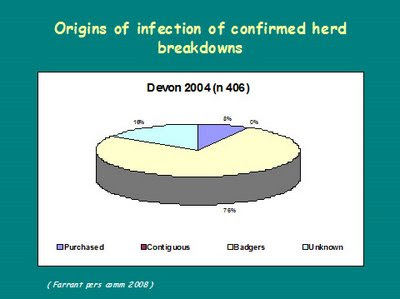 Mr Latham is also quoted in the Farmers Weekly asking the NFU to consider an alternative to blanket and indiscriminate culling of badgers as planned in the pilot culls. Rather than culling both healthy and diseased badgers in a given area, Mr Latham said farm leaders should also consider a targeted cull involving the identification and culling of diseased badgers. A targeted cull would be more acceptable to the public, he said.


"As dairy farmers, we might be indignant that we have been badly done to this year. But we didn't manage to mobilise a fraction of the support mobilised by the 'Team Badger' brigade. We need a strategy that gets people behind us. We need to show we are willing to compromise. Many people think we want to kill badgers. But people are our consumers and we need them on side. Getting them on side would help them help us deliver what we want - which is not actually a cull of badgers but control of the disease. That is what we are after."

We are grateful to Mr. Latham for permission to tell his all too familiar story, and once again to the authors of the paper, first shown at the Killarney Conference on Epidemiology, for the use of their charts.

These risk assessments, so carefully prepared by Mrs. May and other AHVLA staff lie gathering dust, when what they should be doing is forming the first rung of data, for a management strategy to identify the location of all TB reactors. Take your pick: there are enough of them. Cattle for sure, but alpacas, pigs, sheep, deer, bison and goats are all logged now with AHVLA as are the poor old badgers. And we hear that VLA's spoligotype maps, so valuable in establishing spread (or not) of TB are now being built with the locations of several domestic cats. All the cattle have gone.
Posted by Matthew at 8:27 PM