This week the front page of the Farmers Guardian carries the heart wrenching story of one couples' loss of their lifetime's work. Their whole dairy herd. 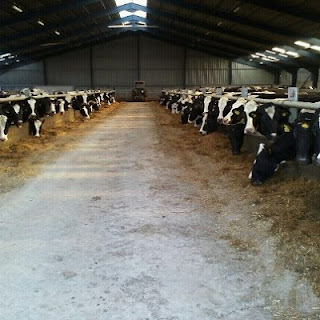 These are some of the 97 dairy cattle, pictured the day before they were slaughtered.  Most were heavily in calf. The calves die too.

This herd is on annual testing, with clear tests prior to this January. So the test's reading day was a shock. So much so that Mrs. Bothwell was asked to return from work, to support her family as the test had revealed almost 100 reactors out of 150 milkers.

Occupying a newly built dairy complex, the Bothwells had invested heavily for their long term future in milk production to the highest standards. But it is situated next to the Football Association flagship, St. Georges Park.  which has also invested. Occupying more land than that which supports the Bothwells' cattle, the Park boasts 13 football pitches, 2 hotels and a conference centre - amongst other amenities. 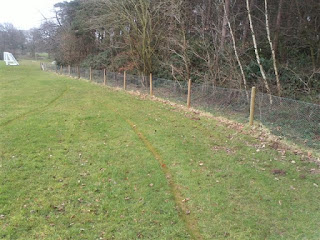 It was built over the last couple of years and fenced last May, prior to the official opening by the Duke and Duchess of Cambridge.
The Bothwell's dairy cattle would have been turned out to graze at about that time. 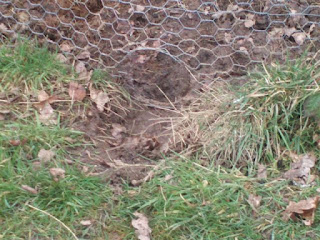 However, the previous occupants of the 330 acre site, seemed unhappy with this arrangement, and have repeatedly broken through the perimeter fence.
Were they trying to get in - or out?
This is just one of several breaches and tunnels.


Sadly, some have not made it, leaving their remains on the pristine pitches, where children (and adults) learn to kick balls around.

We've mentioned the effect that any change in habitat has on infectious badgers before. In an animal where tuberculosis is endemic, it  provokes the disease to 'infectious' status very quickly. AHVLA vets confirm that they have seen herds going under TB restriction  as pipelines, housing and motorways fracture badger territories, provoking the infamous 'perturbation' effect and fighting. And we saw it after FMD (Foot and Mouth Disease) in 2001, where around 11 million grazing animals were removed from the countryside in a very short space of time. No ecological survey was done prior to that carnage, but some incredible assumptions were made after it.

Having seen the photographs of the frantic attempts by badgers to enter (or leave?)  St. Georges Park after its development and the resulting carnage inflicted on this neighbouring herd of dairy cattle, we can only offer sympathy and support to the Bothwells. They are not alone.
After a vintage year for cattle slaughterings in 2012, we have heard of three more complete herd clearances this week and some horrendous losses too.

Badgers don't appreciate floods any more than we do: and if they can't swim and don't drown, they move. And then they fight. And then infected status becomes infectious and bingo, another herd bites the dust.


"Losing the animals - to see dairy cows that have lived here all their lives loaded on to a trailer - was more than heartbreaking. I can’t get over that we lost all those calves as well. I can’t bear to think of the calves going to the slaughterhouse. That really upset me. Louis has taken it very badly – he spent more time with his cows than me. In the first two weeks, I was quite scared. Farmers don’t talk, they keep everything inside.”

As they survey their empty sheds, this is all the Bothwells have left of their lovely herd of dairy cattle.... 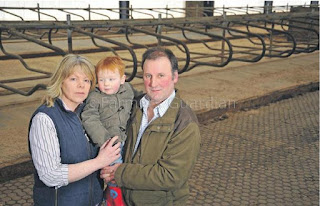 ... and a view of 330 acres of a fenced, football play area with hotels, car parks - and no badgers.