We have been gathering comments from attendees at the NFU Conference last Monday, which offered presentations from the great and the good, mainly involved with keeping this disgraceful charade going.

The speeches opened with Chief Scientist Ian Boyd, ignoring all the myriad of SVS /AHVLA / APHA's risk assessments on the cause of TB breakdowns, and announcing that the reason for TB problems was in the 'too difficult file', but he'd have a guess.


To the exasperation of many in the room, he [Prof. Boyd] said there was ‘overwhelming evidence’ most of the risk to farms ‘lies from cattle-to-cattle infection’ within herds and from the wider cattle population. He said the proportion varies significantly between areas where badgers are present and quoted a previous speaker’s assertion that the overall estimated proportion of badger transmission lies ‘between 6 and 100 per cent with 50 per cent in the middle’,


“We do not know in any specific circumstance. What we do know is there is a big range of possibilities"

No wonder his audience were left gasping. They know, as do we from bitter experience, that each and every breakdown is back traced by Animal Health officers. And has been for decades.

The results were painstakingly tabulated a decade ago, for presentation to the Killarney Epidemiological Conference - a gathering involving real vets, real scientists and using real data. Not modeled assumptions.

And the result, for a county with one of the highest breakdown rates in the country? 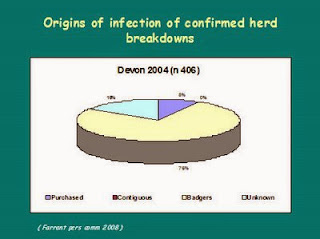 Purchased cattle accounted for just 8 per cent of breakdowns, leaving 76 per cent definitely badgers and 16 per cent probably badgers. So no need for guesses. Just dust off the correct data and read it.

And it is under those circumstances (no bought in cattle and no cattle contact) that we remind our readers of a salient quote:


"the onus must be on those disputing the role of the badger as a significant reservoir of infection to hypothesise other sources of infection for such herds, especially where when investigated, the majority of badger populations in the area have been found to be infected".

So we find it quite bizarre that Professor Boyd can make such generalised and factually incorrect statements which are gathered and recycled unquestioningly, ignoring the (many) herds which do not fit his hypothesis or computer model, and still call it 'science'.

Little discussion followed Boyd's presentation, which opened with the caveat that only pre screened questions would be allowed. Blood pressure was thus raised a tad among his audience.

As Nigel Gibbens was duck watching in Yorkshire, his colleague Malla Hovi took his slot, with the announcement that 'after consultation, 6 monthly testing would be introduced in Cheshire'.


Ms Hovi said the change, which would help pick up infection more clearly, was being made because the radial system of testing farms around breakdowns was ‘proving too difficult to do’.


She said Defra and APHA had ‘taken the [Cheshire] TB eradication board with us’, which she said had been pushing for it as well as they were prepared for ‘short-term pain for long-term gain’.


But one of the members of the group, Cheshire farmer Bill Mellor, called for better communication, claiming he was unaware of the change, at which point Ms Hovi said it ‘has not been decided yet’.


Later, however, Defra confirmed six-month testing was being introduced in the edge area only of Cheshire.

And speaker after speaker rattled on like a broken train about further cattle controls, oblivious to to the irony of their predecessors valiant attempts - [link] to nail our cattle to the floor, and the ignominious failure - [link] of it all.
And of all these speakers, not a single one was prepared to even mention the elephant in the room. Control of the wildlife reservoir which is at the root of all this country's problems. Although one did mention that Australia had no wildlife reservoir of TB.

And as with many of these unchallenged assertions, this speaker was dead wrong - [link] As our pictures show, 13,000 water buffalo and feral cattle were rounded up by helicopter, corralled and shot.
And that is pest control, big time.

Arch wizard of vaccination -  Mark Chambers gave an overview of vaccination of badgers, remarking that his forays into oral vaccination 'seemed to be safe'. Which is very reassuring given his previous attempts.

And predictably, he omitted to mention his failure, a perfectly healthy badger known as 'D313' - [link] who in a less well publicised trial, in which Chambers was involved, was rendered so infected with tuberculosis that had he been on the loose, he would have been described as a 'super excreter'.

What Chambers did confirm though, was that in this project where vaccinated badgers were exposed to m.bovis and postmortemed, all had lesions and all were shedding.
And when the product license was applied for, on the basis of 'doing no harm' rather than efficacy, we assume D313 was airbrushed? 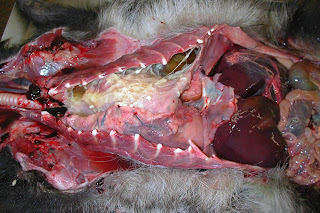 But no one wanted to go anywhere near the possibility that these specimens, (this badger on the left had tuberculous pleurisy) were in any way responsible for the deaths of thousands of cattle, alpacas, sheep, pigs, goats, cats and dogs.

Neither did they mention that around half the badgers (43 - 52 per cent) in areas of endemic Tuberculosis were now infected with this dreadful disease.


All they wanted was more testing, more dead cattle and more controls. And we'll pay.
Posted by Matthew at 9:13 PM